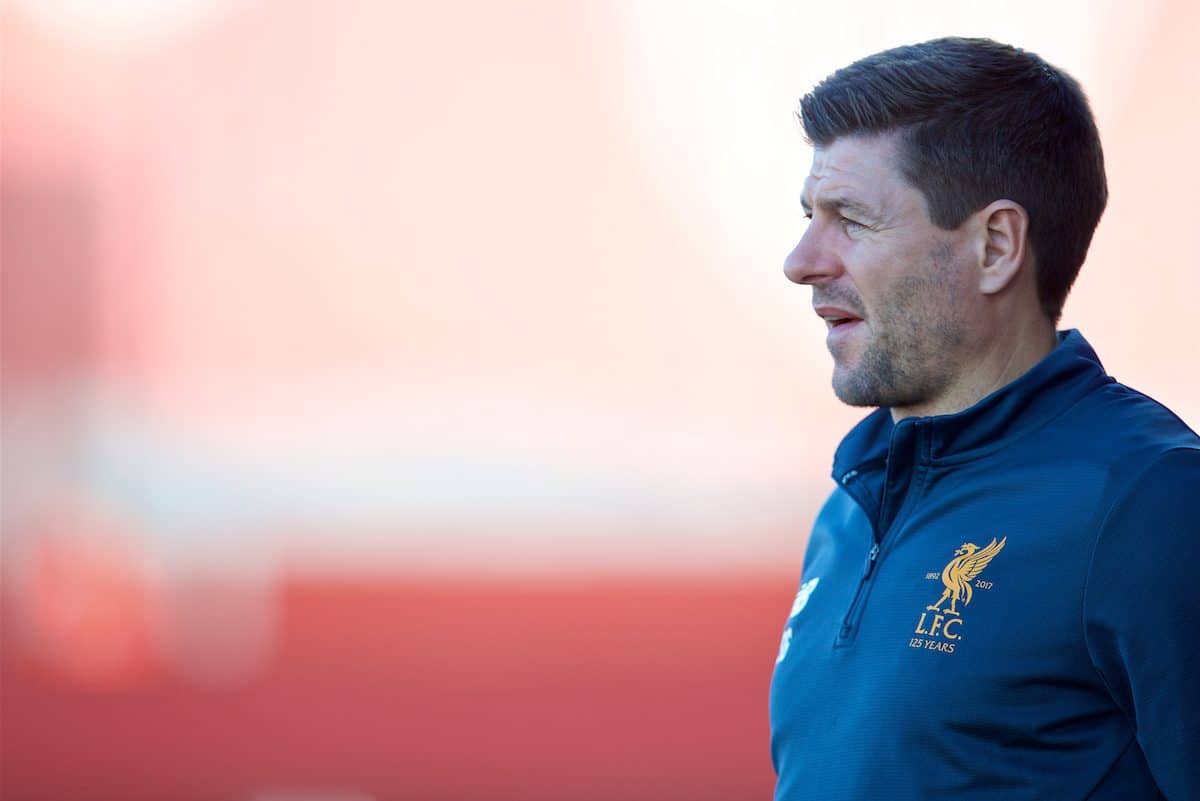 Liverpool U18s lost 3-2 at home to Arsenal in the FA Youth Cup fourth round on Saturday afternoon, on Steven Gerrard’s debut in the Anfield dugout.

The young Reds took to the first-team stadium at special request from Gerrard, who has overseen an excellent start to life as manager of the U18s.

Though deprived of Ben Woodburn due to senior involvement and Rhian Brewster due to injury, the 37-year-old was able to name a strong starting lineup on Saturday, with a place in the fifth round in sight.

Adam Lewis, Edvard Tagseth, Curtis Jones, Rafa Camacho and top goalscorer Liam Millar were among those to walk out the tunnel at Anfield, taking on an impressive Arsenal outfit.

The U18s were dealt a blow early on, however, with Gunners midfielder Robbie Burton firing beyond Vitezslav Jaros via a big deflection following the bright Xavier Amaechi’s free-kick.

Liverpool continued to push for an equaliser after, though, with Lewis in the thick of it throughout, avoiding a potentially serious injury following a nasty fall.

But it was the man ahead of Gerrard’s captain that played an influential role in the leveller, with Camacho teeing up Jones to fire home his 14th goal of the campaign to make it 1-1 at half-time.

It took just four minutes after play resumed for Jones to net his second of the afternoon, with the midfielder benefiting from a deflection to beat Joao Virginia and double his tally.

The young Reds kept up the pressure afterwards, and Millar saw a goal ruled out for offside following Lewis’ cross.

Arsenal also saw an effort disallowed shortly after, with Trae Coyle left disappointed as the ball was adjudged to have gone out in the buildup to his strike.

Anfield witnessed an end-to-end encounter throughout the second half, with both Virginia and Jaros tested on a number of occasions, before the Gunners equalised through Bukayo Saka. Gerrard urged his side to push for a late winner, but they were left to play out extra time as they bid for progress.

And Arsenal struck early again as Tyreece John-Jules beat Jaros to edge the visitors ahead again, prompting Gerrard to make a handful of changes.

The young Reds forced the Gunners back as they sought an equaliser of their own, with substitute Yasser Larouci twice testing Virginia, but the full-time whistle blew to consign Gerrard’s side to an FA Youth Cup exit.

For many supporters, the afternoon was further marred by an inability to make it into the stadium before kickoff, with queues stretching outside long after 3pm.

The demand clearly exceeded Liverpool’s expectations, and the hope will be any problems are ironed out by the next time Gerrard’s side turn out at Anfield.