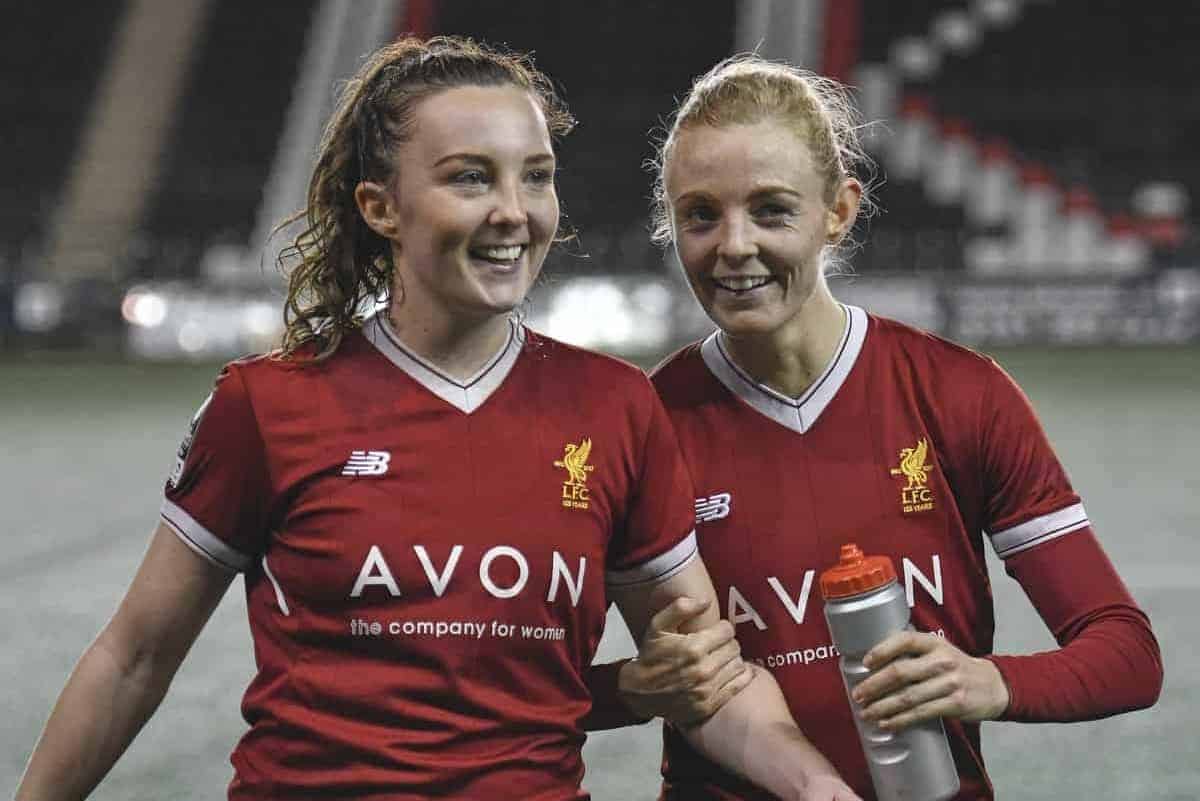 Liverpool Ladies return to FA Cup action this weekend and midfielder Caroline Weir hopes they can go all the way after a close call in 2017.

The Reds were knocked out in the semi-final last year as eventual winners Man City marched on to Wembley to lift the trophy.

However, Weir is eyeing up the final this season and is confident Liverpool can progress through to the fifth round with victory over Watford on Sunday.

“The FA Cup is such a big competition in England and obviously every team wants to do well in it,” she told This Is Anfield.

“We have a big game against Watford this weekend—who will be a difficult team to play. But of course we want to get to Wembley, having gone out so close last year.

“We know what it’s like to go far but not quite far enough. We want to go one better than last year and see how far we can get.

“Watford will be a difficult game. I think we go into the game as favourites but they can sometimes be the harder games.

“We know they are well organised and they have some decent players so it will be tough and we need to be at our best.

“We won’t look too far ahead though because we know they have threats and we will prepare for that game the same way we do every game.” Weir insists Liverpool go into the game full of confidence following their impressive 2-0 victory over Bristol City in the Women’s Super League.

“Bristol was a really positive game for us because they are a good team and we knew it was going to be tough,” said Weir.

“We played really well across the full 90 minutes and we were ruthless in attack, as well as well organised in defence.

“We will take confidence from that game because I thought our tempo was really good and much better than it has been. We will want to push forward with that.”

It was Bethany England’s brace which got Liverpool over the line in that victory against Bristol City—taking her tally up to six goals in two games.

She has been in scintillating form in front of goal since the turn of the new year and Weir hopes it can continue throughout the FA Cup competition. Liverpool have also been given a boost in recent weeks following the return of defender Amy Turner—who was absent for 18 months following a serious knee injury.

“Beth has been great. She adds a lot to our front line. She is a good target player for us and her finishing is terrific,” Weir added.

“Her stats have shown that—six goals in two games is a great record. She adds a lot to the team and we’re really happy for her that she has settled in so quickly.”

On Amy’s return, Weir added: “It is a big boost for us because she is a great player and certainly brings something extra to that back four and the squad on the whole.

“It’s just great to have her back.”

Despite plenty of positives, Liverpool suffered a serious blow this week when it was announced captain Gemma Bonner could miss up to 12 weeks of action through injury.

Bonner, who has made over 100 appearances for the club, is a key member of Scott Rogers’ side and her presence at centre-back will be hard to replace. However, Weir insists the team have plenty of players ready to step up to the challenge and Bonner’s injury has only spurred the team on to achieve results in the cup competition.

“It was a big blow to lose [Gemma.] Not only is she a great player but she’s also a great captain,” Weir admitted.

“We have a lot of squad depth though so we will be able to cope without her I’m sure and we have young players coming through who can step up.

“We know she will come back stronger because she has a great attitude.

“When such a big player is out you always want to do well for them but we want to go far in the FA Cup no matter what anyway.

“We want to give her something to cheer about.”

One youth player who will be hoping to gain some game time throughout the competition is Rinsola Babajide, who signed for Liverpool this month.

The England U21 international is “enthusiastic” says Weir, and she is another “great addition to the squad.”

“Rinsola is a good signing. She has a lot of potential and she’s a really fast player so she adds to that pace that we already have,” the 22-year-old added.

“She’s a good, young player that is enthusiastic and obviously wants to do well. It’s good to have young players who want to go out and play with no fear.

“She’s a great addition to the squad and hopefully she’ll add to the strength of the team.”

Liverpool Ladies take on WSL 2 side Watford in the fourth round of the SSE Women’s FA on Sunday 4 February at 1pm at the Liverpool County FA, Walton Hall Park.

Admission prices are £2 for adults and £1 for children (under 16s), OAPs and students with a valid student ID. Click here to buy tickets.