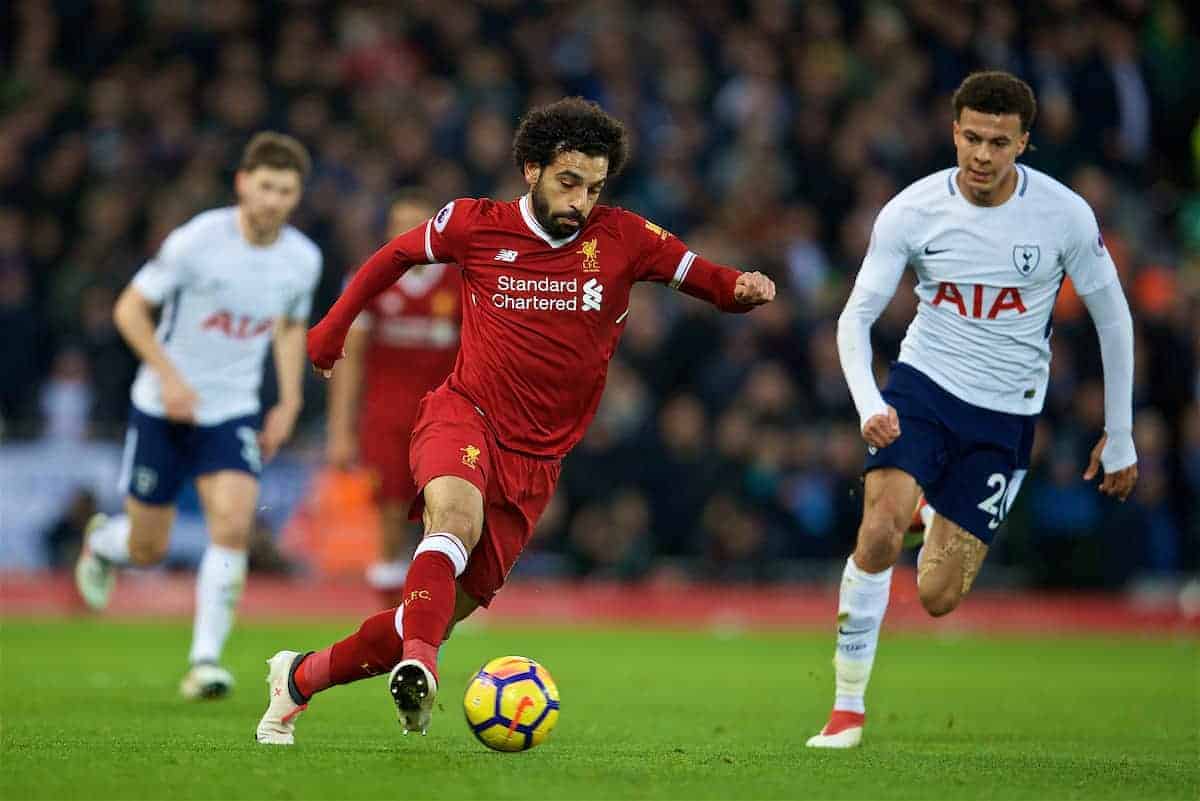 An incredible finish saw Liverpool and Tottenham both score in injury time as the points were shared at Anfield.

Jurgen Klopp made two changes from the side that beat Huddersfield in the week, with Virgil van Dijk and Trent Alexander-Arnold replacing Joel Matip and Joe Gomez (injured).

After the 4-1 thrashing at Wembley in the reverse fixture, Liverpool wanted revenge and they got the perfect start when Mo Salah scored his 20th league goal of the season after just over two minutes.

The Egyptian capitalised when the ball ended up at his feet on the edge of the box and calmly slotted past Hugo Lloris in front of the Kop.

Liverpool had chances for a second, both created by Alexander-Arnold down the right. First James Milner‘s shot looped wide via a deflection, then Roberto Firmino‘s glanced header from Alexander-Arnold’s excellent cross from the right went just wide.

Van Dijk had two half chances off free-kicks, and Loris Karius made a good save to deny Moussa Dembele. The first half ended 1-0 to the Reds.

Karius made another good save, this time to deny Son Heung-Min in the second half, as Spurs began to dominate the ball and the home side instead playing more on the counter attack.

Liverpool were struggling for any possession and a double sub just after the hour saw Gini Wijnaldum and Alex Oxlade-Chamberlain replace Jordan Henderson and Sadio Mane.

That change did little to stem the flow of the game, with Spurs continuing to dominate but failing to break down a stubborn Liverpool defence.

Liverpool introduced Joel Matip and changed to a back five in order to try see out the win, but the visitors finally got the equaliser with 10 minutes to go.

It was Spurs’ sub Victor Wanyama who hammered home from 25 yards minutes after coming on.

It got worse for Liverpool when Karius took out Harry Kane for a penalty with five minutes to go. But the German expertly redeemed himself with a save to deny Kane from the spot.

Liverpool were playing like a team with a man sent off, struggling for any type of possession.

But when one of them men is Mo Salah, you have a chance and the forward scored an sensational goal in injury time, beating four defenders and finishing past Lloris for an incredible goal.

But the action wasn’t over there, with a bizarre penalty being awarded for a foul by Van Dijk on Dembele – with the linesman somehow awarding the spot kick after the referee had waved play on.

Kane dispatched the penalty this time with the final kick of the game. It was a farcical decision from the referee, who had waved play on after seeing the incident from close up, but somehow took the linesman’s decision who was further away to bring the game back.

The points were shared, but Liverpool will be furious with referee Jon Moss. The result keeps Liverpool third, two points ahead of Spurs in fifth.

Next Match: Southamtpon (away, Sunday 11 February)