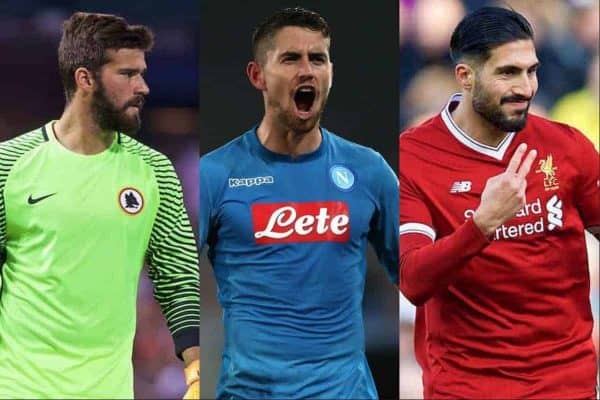 We round up the latest Liverpool FC news and rumours on Friday, ahead of the Reds’ Premier League clash with Newcastle United on Saturday.

With just over three months to go until the summer transfer window opens, speculation continues over Jurgen Klopp‘s targets.

Two players widely reported to be on Liverpool’s radar are AS Roma goalkeeper Alisson and Napoli midfielder Jorginho; both born in Brazil, though the latter is now an Italy international.

According to Brazilian outlet UOL, the Reds have approached both clubs regarding potential deals ahead of 2018/19.

They claim that Jorginho is the Reds’ priority to replace the likely departing Emre Can, and though he could still stay at Napoli he could be allowed to leave if they sign Lucas Torreira.

And UOL also suggest Liverpool are ahead of both Real Madrid and Paris Saint-Germain in the race to sign Alisson.

Juventus Still Unclear on Can Signing

That the pursuit of Jorginho has been linked with Can’s exit is indicative of the German’s future.

Can has just four months left on his contract with Liverpool, and is widely expected to leave on a free transfer with Juventus his most likely destination.

However, while the Serie A giants’ general manager Giuseppe Marotta reiterated their interest in Can this week, he also insisted that no deal was in place yet.

“We know that there are other clubs in the race to sign him,” he said.

The ideal scenario would be Liverpool’s strong end to the campaign convinces Can to stay, and he is joined by Jorginho and Naby Keita as part of Klopp’s long-term midfield unit.

Liverpool in Line For Awards Treble

Long range pile-drivers and silky team goals make up our February Carling Goal of the Month shortlist! Vote now for who you want to win: https://t.co/WjsTtCF9MJ pic.twitter.com/2ieRoW2f5T

Liverpool were undefeated through February, with three of their games coming in the league, bringing victories over Southampton and West Ham and an unlucky draw played out with Tottenham.

As a result, the Reds have been recognised in the Premier League‘s monthly award nominations, with both Klopp and Mohamed Salah shortlisted.

Salah is up for both the Player of the Month and Goal of the Month awards, with his sublime solo effort against Spurs in the running for the latter.

Meanwhile Klopp is up against Javi Gracia, Chris Hughton, Mauricio Pochettino and David Wagner for his award, with the German choosing Hughton as his preferred winner.

You can vote for Klopp here, and for Salah here and here.

Liverpool academy product Connor Randall joined Scottish Premiership side Hearts on a season-long loan back in July, and has so far gone on to make 22 appearances for his temporary side.

The right-back has featured eight times for the Reds in his career, but at 22 he is highly unlikely to carve out a long-term future at Anfield.

And speaking to the Edinburgh Evening News he confirmed he would be “open” to a permanent switch to Hearts, despite no indication yet of a deal.

“It hasn’t come up yet. The conversation hasn’t happened. If it does, I’ll be open to listening to that conversation,” he revealed.

“It depends what happens in the summer between the clubs and what they decide to do.

“I haven’t heard anything yet. All I can say is I’ve really enjoyed my time here.”

Watch Klopp’s full press conference ahead of Saturday’s meeting with Newcastle above, with the manager discussing:

The Reds can move back up to second in the table with a win, though Man United would overtake them again if they beat Crystal Palace on Monday night.