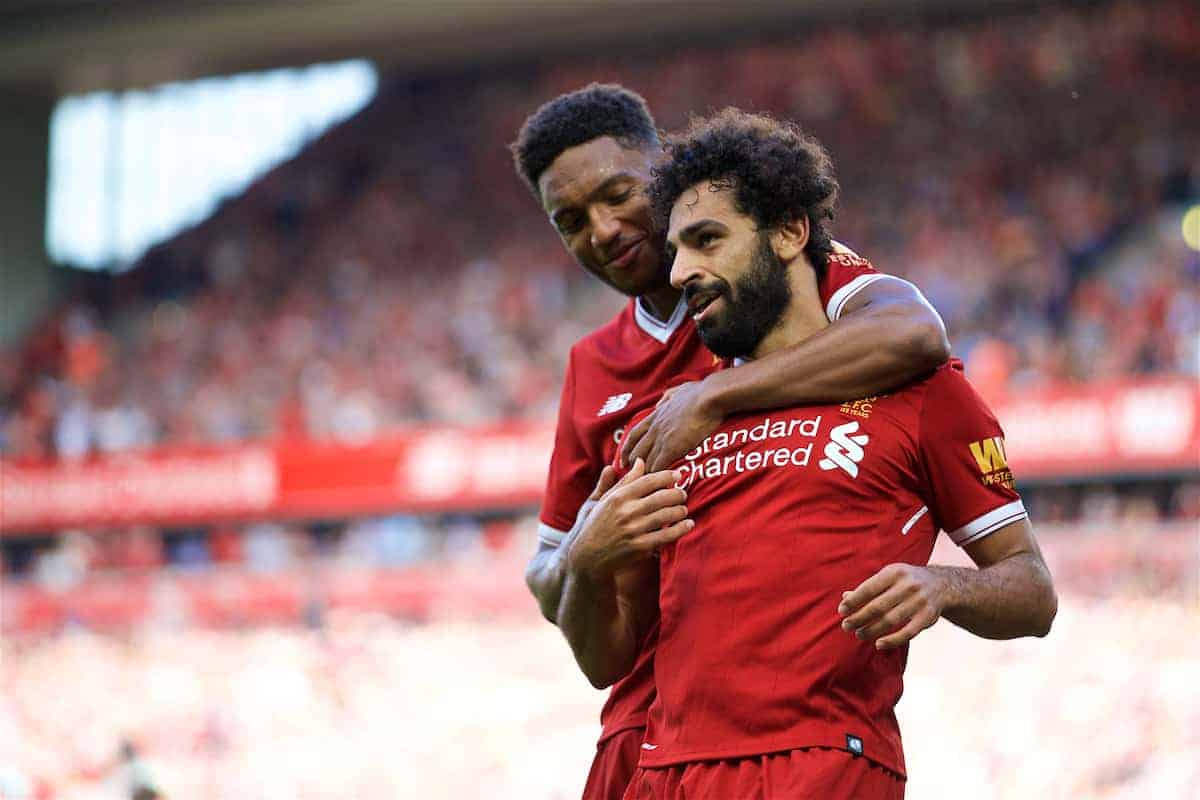 Defender Joe Gomez admits Liverpool’s players enjoy watching forward Mohamed Salah in full flow as much as their fans do.

The Egypt international became the first Reds player since Luis Suarez in December 2013 against Norwich to score four times in a game as Watford were demolished 5-0 at Anfield.

Salah is close to recreating the magic effect the Uruguayan had over the team when they almost won the league in 2013/14 and he is just three away from Suarez’s total of 31 league goals in a single season, having already taken his tally in all competitions to 36.

The first and third goals of his first Reds hat-trick had a Lionel Messi-like quality to them; dumping Miguel Britos on his backside for the opener before sneaking in a shot through a crowd of players while falling over for the third.

Asked what effect Salah, who also provided the assist for Roberto Firmino’s audacious backheel through his legs for Liverpool’s third on the night, has on the team Gomez said: “It is indescribable.’

“The goals he brings are invaluable and he is just so good to play with. It was a pleasure to be out there,” he told LFCTV.

“He’s a special player; he is special to watch and I think we on the pitch enjoy it as much as the fans do.

“The fact he has so many assists (nine in the Premier League) shows he is bringing more than just his goals.

“He’s a positive person and a great guy to be around. He just gets on the ball and does what he does.

“He complements the team so well with Bobby [Firmino] and Sadio [Mane] and the front three anyone in the world would fear them. They all showed their quality in different ways.”

Firmino’s 23rd of the season marked the best goalscoring campaign of his career, beating the 22 he managed in 2013/14, and while Mane did not get on the scoresheet it was another performance which showed he is starting to rediscover the form of last year.

Liverpool have now scored 206 goals in 99 Premier League matches under Jurgen Klopp but Salah’s hat-trick was the first of his reign in the league.

That shows how the goals have been shared around and Klopp was keen to point out how the combined efforts and talents of the players is paying dividends.

“You need always someone who brings the ball over the line but I have to say it again Sadio looked so mature, so cool on the ball, and yet a few weeks ago he had a few fights with himself,” said the German.

“Then in a 5-0 you speak about a striker and his defensive work-rate but what Firmino did – ask other teams if they like to have him on their back.

“In no other games [does this happen]—only the No. 9 of Liverpool is chasing you.”

Watford boss Javi Gracia has only a handful of players away on international duty next week so will look to put things right after shipping eight goals to Liverpool and Arsenal.

“We have time to work and speak about the last two games,” he said.