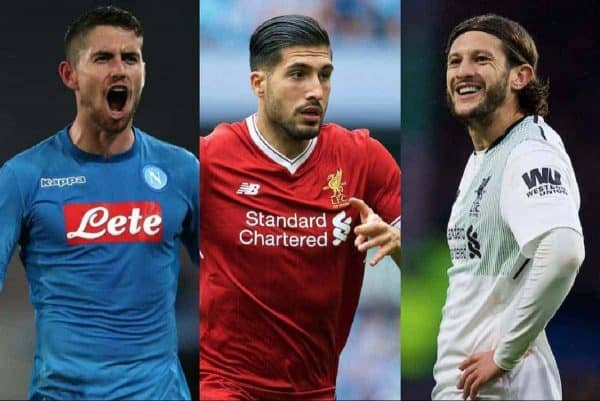 We round up the latest Liverpool FC news and rumours on Tuesday, with Jurgen Klopp potentially moving closer to a priority summer target.

Italy midfielder Jorginho has been touted as one of Klopp’s primary candidates to fill the No. 6 role next season, with Emre Can expected to leave on the expiry of his contract.

However, it is not clear whether Napoli will part ways with the 26-year-old given his importance to Maurizio Sarri’s side.

But according to Corriere dello Sport, the Serie A side have now agreed terms with a potential replacement in Sampdoria youngster Lucas Torreira, ahead of a potential €25 million deal.

Jorginho’s agent Joao Santos, however, believes the Uruguayan would initially arrive as his client’s backup.

Though while Santos insisted he and his client “are not looking for anything,” he added Jorginho would be forced to “evaluate” his options if Napoli accepted an offer.

Santos had previously admitted that Jorginho “could be sacrificed to make way” if Torreira did arrive—so could Liverpool take advantage of this confusing situation?

Bayern Join Race For Can…But Could He Stay?

Any move for Jorginho would presumably rest on Can’s departure, with the Germany international set to see out the remainder of his contract after four years at Anfield.

Juventus are widely considered to be the 24-year-old’s most likely destination, though CEO Beppe Marotta stressed on Saturday that “his reply is not going to arrive any time soon.”

Now, Italian publication Tuttosport claim they could face major competition from Bayern Munich, with the Bundesliga giants “pressing” Can’s representatives for a deal.

There is still the possibility of Can extended his stay with Liverpool, and if rumours of the midfielder buying his previously rented property in Formby are to be believed, that may just be the case…

After Saturday’s setback at Man United, Liverpool will aim for an immediate response as they host Watford at Anfield this weekend.

Klopp oversaw training at Melwood on Tuesday afternoon, with the majority of his squad continuing preparations with both indoor and outdoor work.

Adam Lallana was seemingly the only player to miss out, with the 29-year-old not pictured after playing the final 28 minutes of the 2-1 defeat at Old Trafford:

Lallana may, of course, merely be in recovery as Liverpool continue to manage his fitness, but in an injury-plagued campaign it is not out of the question that he has suffered another setback.

Neither Kamil Grabara or Ben Woodburn were involved, with the young duo likely starting for the U19s in their UEFA Youth League quarter-final away to Man City on Wednesday.

But after trials with the likes of Crystal Palace, Leeds United and Queens Park Rangers the teenager was faced with the prospect of spending the entire season unattached.

However, Owens has been handed a lifeline by League One side Bristol Rovers, who announced on Monday that he had signed a short-term deal with the club until the end of the season.

Owens joined the Reds’ academy at the age of eight, so it is great to see another academy prospect given the chance to establish himself elsewhere.