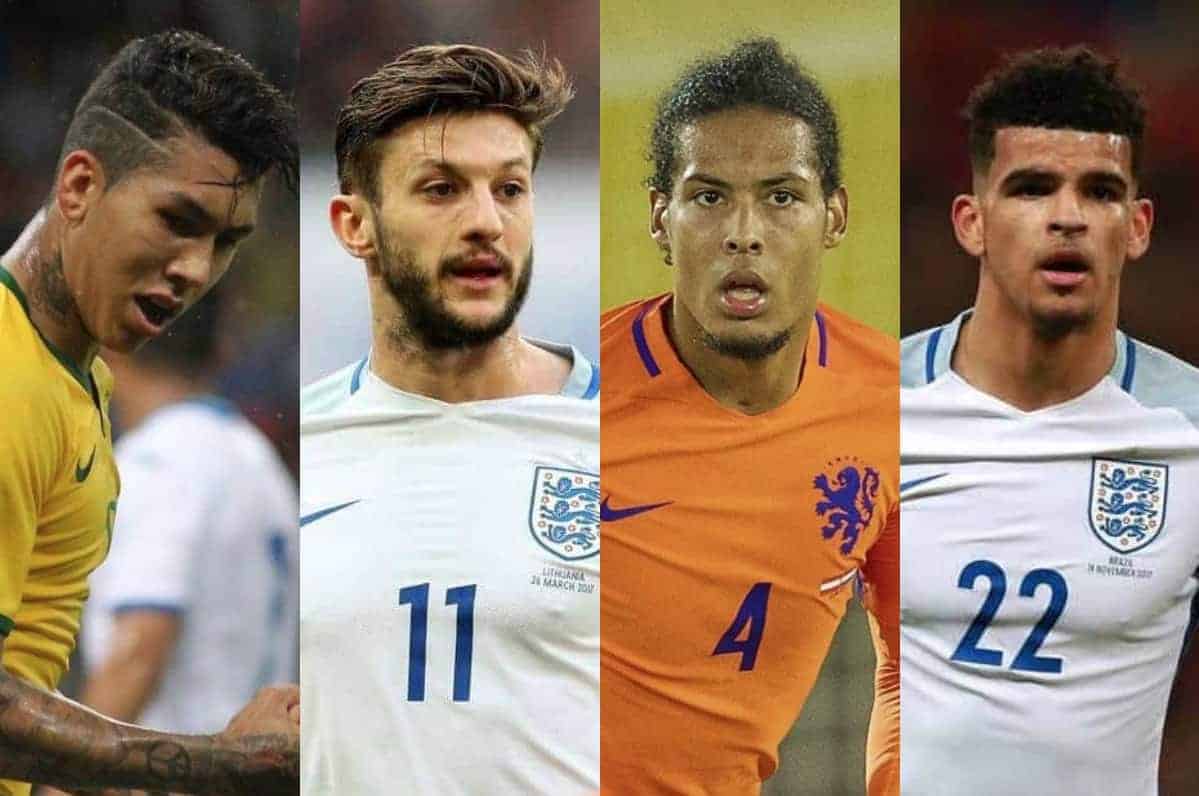 The international break is now over and Jurgen Klopp‘s Liverpool squad return to Melwood on Wednesday after a host of productive performances.

The Reds will begin preparations for Saturday’s clash with Crystal Palace this week, with their trip to Selhurst Park coming two weeks after thrashing Watford at Anfield.

With national teams finalising plans for the World Cup and youth sides booking their places at upcoming European Championships, this latest interval was an entertaining one.

Joe Gomez will be hoping his latest ankle injury doesn’t keep him out of Gareth Southgate’s plans for Russia, with the 20-year-old missing England’s 1-1 draw with Italy.

Alex Oxlade-Chamberlain was the only Liverpool player to start at Wembley on Tuesday night, with Adam Lallana and Jordan Henderson second-half substitutes.

Elsewhere, Virgil van Dijk capped an excellent break by scoring his first goal for the Netherlands in his second game as captain:

Great time away with the national team. Really happy overall with the work we put in as a group during the international break capped off by a fantastic result last night against Portugal ? what a feeling to score my first goal for my country too! ??? pic.twitter.com/y7KJ5lsfik

Georginio Wijnaldum also started and played 68 minutes in a comfortable 3-0 win over Portugal.

Sadio Mane was the only one of Klopp’s on-fire front three in action in the second half of the break, playing 87 minutes in Senegal’s 0-0 draw with Bosnia & Herzegovina.

Fortunately both Mohamed Salah and Roberto Firmino remained unused in Egypt’s 1-0 loss to Greece and Brazil’s 1-0 victory over Germany respectively.

Emre Can was also absent in the latter, leaving Joachim Low’s squad to return to Merseyside after a recurrence of the back injury that forced him off against Watford.

Scotland sealed their first victory under Alex McLeish on Tuesday night as Andrew Robertson played 67 minutes on the way to a clean sheet in a 1-0 win away to Hungary.

Simon Mignolet was also in action as the goalkeeper played for the first time since January 27 as Belgium beat Saudi Arabia 4-0, with Divock Origi remaining on the bench throughout.

Harry Wilson and Ben Woodburn had similarly mixed afternoons as Wales lost 1-0 to Uruguay in the final of the China Cup on Monday, the former playing 90 minutes and the latter unused.

Speaking after the game Ryan Giggs explained his decision to field Wilson against both Uruguay and China due to “seeing the benefits of playing week in, week out” on loan at Hull City.

Ragnar Klavan played a rare 90 minutes in both of Estonia’s clashes of the break, firstly in a 0-0 draw with Armenia on Saturday and then a 2-0 loss to Georgia on Tuesday.

Replacing Nemanja Matic for the final 25 minutes of Serbia’s 2-0 victory over Nigeria in London, Marko Grujic secured his latest senior cap as he bids for a World Cup place.

And finally, Liverpool U23s striker Liam Millar made his debut for Canada in their 1-0 friendly win over New Zealand on Saturday, playing all 90 minutes to be named Man of the Match.

On the youth stage, Trent Alexander-Arnold and Ovie Ejaria both started as the England U21s beat Romania 2-1 in the Cyrille Regis International, but were then left out against Ukraine on Tuesday night.

Instead, Dominic Solanke was the sole representative in that Euro U21 qualifier, playing through the pain barrier to score an 88th-minute goal to make it 2-1 after coming on with 13 minutes left.

The Republic of Ireland U21s also benefited from a late, late goal as Corey Whelan played the full 90 minutes in a last-gasp 1-0 victory over Azerbaijan.

Caoimhin Kelleher was absent, however, with the young shot-stopper returning to Melwood to take part in first-team training instead. His counterpart, Kamil Grabara, was in action for the Poland U21s though, keeping a clean sheet in a 1-0 win over Lithuania.

Liverpool U18s captain Adam Lewis played 68 minutes in the England U19s’ 3-0 win over Latvia on Saturday as the Young Lions sealed their Euro U19 place, but was then unused in Tuesday’s 2-0 loss to Macedonia.

And both Elijah Dixon-Bonner and Curtis Jones started in the England U17s’ 1-1 draw with Brazil in Spain on Monday.