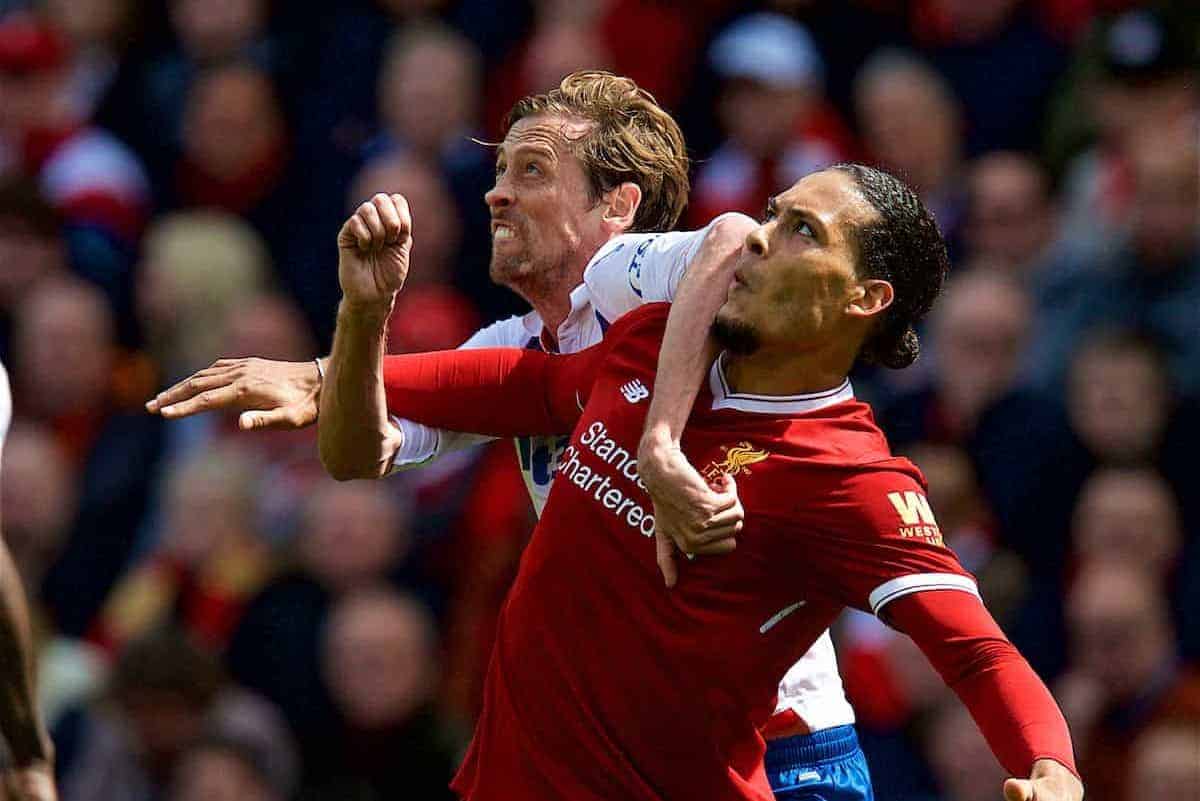 Liverpool produced a flat display at Anfield at they played out a 0-0 draw with Stoke City, with few individuals coming away with any credit.

The German had a completely untroubled day between the sticks.

Such was his lack of action one wayward pass out from the back outlined a lack of concentration, and he was hardly tested all game.

Gomez has struggled since returning from injury, and he was noticeably below par on Saturday lunchtime.

The young defender was rusty on the ball, using it messily, and one terrible decision to lunge in and make a tackle almost cost Liverpool a goal before the break.

It is unfair to get on his back too much, however—he is a youngster still learning his trade.

The giant Dutchman was again reliable at the heart of the defence, albeit against a Stoke outfit offering little attacking threat.

The 26-year-old was crisp in possession, barring a couple of uncharacteristically wasteful passes, and he won aerial battles and showed leadership.

The veteran Estonian came into the side for Dejan Lovren and enjoyed a solid afternoon.

It was difficult to judge him considering the fact he was rarely called into action, but he certainly did little wrong.

Possesses a more cultured left foot than he is given credit for. Brought in for Andrew Robertson at left-back, this was another bitty performance from Moreno, as was the case at West Brom last weekend.

The odd defensive lapse was still on show, and the crowd voiced their frustration at one lazy pass into the penalty area in the first half.

For all Moreno’s qualities, the Reds really miss Robertson when he isn’t involved.

After a tremendous performance in midweek, Henderson was a much more low-key figure.

He snapped into tackles with his usual gusto, but in general his passing was ponderous and hopeful, but there was nowhere near the same intensity to his game.

There was a big injury concern just before the interval after he went down holding his ankle, but he shrugged it off, fortunately. Another who shone brightly against Roma, Wijnaldum was neat and tidy without ever replicating those heights.

One shot into the side-netting showed the attacking threat he can carry, but he was never at full tilt.

He will play both better and worse in future.

With a dearth of options in midfield, Alexander-Arnold was pushed into the middle of the park in an intriguing move by Klopp.

The 19-year-old never looked remotely out of place in the role, with one early burst into the box nearly earning him a penalty, and Jack Butland also prevented him from opening the scoring.

It wasn’t perfect by any means—his influence dwindled as the game went on—but it was promising moving forward.

He’s a midfielder at heart. Liverpool’s star man endured one of his poorest outings of an incredible season.

He missed a huge chance early on, dinking the ball wide when clean through, but an excellent free-kick did come close to finding the top corner.

He was shackled impressively by Erik Pieters, and lost the ball a frustrating number of times. Looked tired.

The Brazilian is having a majestic season, and he always looked one of the most likely to make something happen against the Potters.

His choice of pass and all-round decision-making caught the eye, as did his usual work rate, but he couldn’t hit absolutely top gear.

Far from his best, but even on an off day, Firmino is still half-decent.

A wretched display from Ings, who looks nowhere near good enough to be representing Liverpool.

The striker offered almost nothing in terms of quality in the final third, even though a decent finish from an offside position did find the net.

The Reds’ attack felt completely blunted with him involved, and it is hard to see him at Anfield beyond the summer. Used almost as a right winger, he rarely looked a threat and took no risks in possession.

Tried to make things happen, but to no avail. This was a really frustrating afternoon for Klopp, who will be fuming with the lifelessness of his team’s performance.

The German has to take some of the blame for that, of course, but you couldn’t really question his starting lineup, and using Alexander-Arnold in midfield was a good move.

There are bigger fish to fry for the manager, but this wasn’t his greatest day in the job.