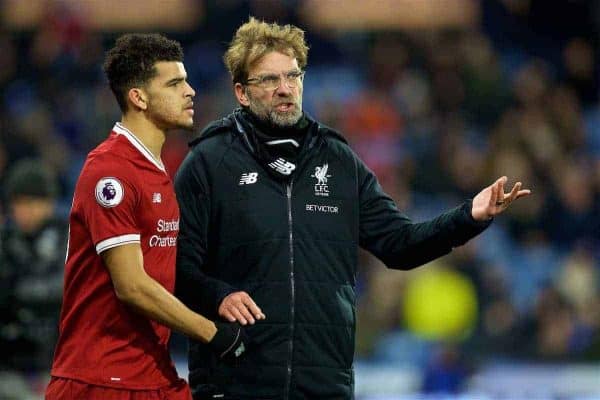 Jurgen Klopp has selection dilemmas and injury problems to contend with this weekend, as Liverpool host Stoke City.

The Reds are at home to Paul Lambert’s relegation-threatened side on Saturday lunchtime, in a crucial Premier League clash for both clubs.

Two draws in the last three league outings for the Reds means the top-four battle is still alive, and further dropped points against the Potters would be problematic ahead of next week’s trip to Chelsea in the penultimate game of the season.

Tuesday’s stunning 5-2 win over Roma in the Champions League semi-final first leg was another special night under Klopp, but focus must now be on this match.

Lambert has an excellent record as a manager at Anfield, and Saturday 12:30pm kick-offs have famously not been kind to Liverpool of late.

Predicting who Klopp is going to select in his starting XI is never easy, but with key men out and others possibly in need of a rest, the decision feels even tougher currently.

Klopp is definitely without stricken quartet Joel Matip, Emre Can, Adam Lallana and Alex Oxlade-Chamberlain, while Sadio Mane is also expected to miss out.

Trent Alexander-Arnold could be given the afternoon off in order to ease his workload, with the returning Nathaniel Clyne an able replacement at right-back.

Jordan Henderson, James Milner and Gini Wijnaldum are the only fit senior midfielders at Klopp’s disposal, and with four days between the Stoke and Roma games, starting the trio is a viable option.

Mohamed Salah and Roberto Firmino are both indispensable to Liverpool, and while the risk of injury is always there, starting them makes total sense, especially with Mane likely to be missing.

Dominic Solanke or Danny Ings could come in to complete the attacking unit, with the former arguably the better choice, as he did for the away clash at Stoke.

Ragnar Klavan and Alberto Moreno will be keen to enjoy some playing time, but shaky showings away to West Brom last weekend means they are less likely to start.

Klopp may think about changes to his back-line, however, with Virgil van Dijk and Andrew Robertson both featuring prominently of late, much like Alexander-Arnold.

Teenager Ben Woodburn has had a frustrating season, making just one substitutes’ appearance for the first-team, but could this be his chance to shine?

It would allow Klopp to give one of his midfielders a breather, most likely veteran Milner.

Ings could easily be preferred to Solanke, especially after scoring the opener at West Brom last weekend, and him starting could see Firmino shifted to the left of a front-three.

Finally, the manager may be tempted to opt for three at the back, using Joe Gomez in the centre-back role he craves, alongside any two from Dejan Lovren, Van Dijk and Klavan.

Moreno and Clyne would be capable wing-backs, providing energy up and down both flanks, with a two-man midfield again affording one of Henderson, Milner or Wijnaldum a place on the bench.

Woodburn’s versatility means he can shine on the left of a front-three, allowing Firmino to play in the central role he has shone in all season.

Second-guessing a Klopp starting lineup is always difficult, but with players dropping like flies and matches coming thick and fast, it is very difficult to know what he will go with against Stoke.

Keeping faith with a chunk of those who performed so admirably on Tuesday makes the most sense, but don’t be surprised to see fringe players and youngsters heavily involved.