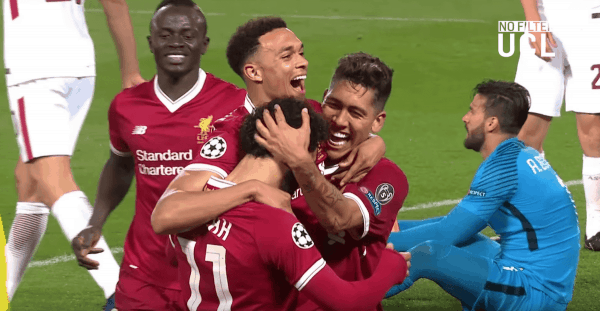 Liverpool coasted to a famous 5-2 victory against Roma in the Champions League semi final first leg, and BT Sport’s behind-the-scenes footage of the game has expertly captured the night.

It was another famous European evening for the Reds, as they made themselves firm favourites to reach the Champions League final in Kiev on May 26.

Roma were powerless to prevent a Liverpool attacking blitz that saw them cruise into a 5-0 lead, with Mohamed Salah and Roberto Firmino scoring twice, and Sadio Mane also finding the net.

Two late goals for the visitors were an undoubted blow, but it was still a special performance, and one that should be talked about for years to come.

The above BT Sport ‘No Filter UCL’, gives a great look at what went on throughout the night at Anfield, with behind-the-scenes shots galore.

Beginning with stunning scenes outside the ground, the supporters are in great voice, with “Allez! Allez! Allez!” being sung with great passion.

Steven Gerrard, on punditry duties, jokes with Frank Lampard about Luis Garcia’s infamous ‘Ghost Goal’ from the 2005 semi-final against Chelsea, saying, “well over the line that, in my opinion”.

The ‘Egyptian King’s’ second of the night is equally delightful, leading to scenes of unbridled joy in the stands, with supporters embracing with one another.

Gerrard punches the air as Sadio Mane makes it 3-0, while managing not to drop his plate of food, and Roberto Firmino‘s double is seen from interesting angles at the Kop end.

After the game, Gerrard admits concern about the two conceded goals, but calls Salah, “the best player on the planet right now”.

Meanwhile, Klopp rues some of his side’s missed chances in his post-match interview, although the German is quick to label the performance as “brilliant”.

It is a great watch for any Reds fan, as this unforgettable season continues.