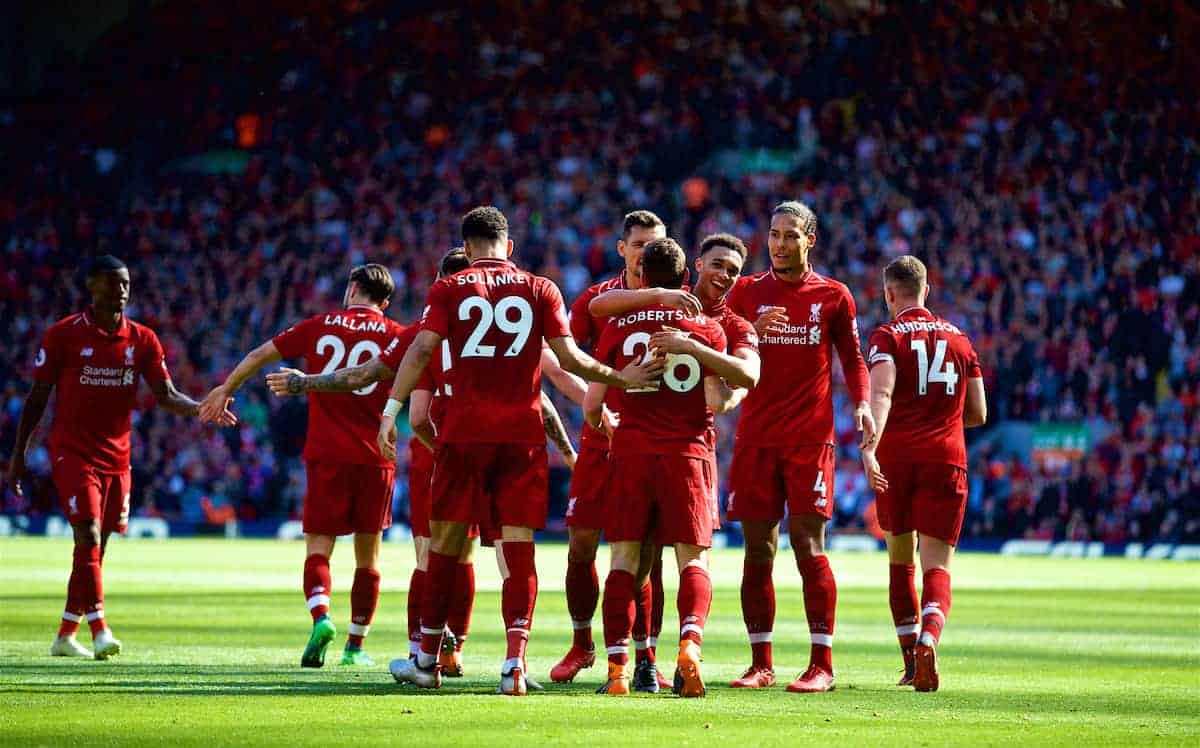 The Reds ensured Champions League football will be played at Anfield for successive seasons after a convincing 4-0 final day win over the Seagulls.

It completes another excellent Premier League campaign for the Reds, with Champions League football secured for back-to-back campaigns for the first time since 2009.

Supporters were delighted with the result and here’s how Reds fans reacted to the win—and the season—across Twitter, Facebook and on our forums.

This is what happens when you have a weeks rest.

If you were worried you underestimated this football team.

Perfect preparation for Kiev. We were fantastic when we needed to be.
– Danny on the forums

This has been the perfect day. Now win it in Kiev lads.

What today shows is that the performances against Stoke and Chelsea were because we were absolutely knackered.

We got two weeks before Madrid.

Hendo has been class today.

It’s reassuring to see how energetic we were. It looked in the last few games we were running out of steam, but clearly with a whole week’s rest we found our Mojo again.
– John Scott on Facebook

Karius has absolutely earned the starting job next season at this point.

Icing on the cake, that. Robertson’s been one of the highlights since the turn of the year. Great to see him get a goal. Salah officially awarded the golden boot. Made even sweeter knowing nearly everyone at work had Kane bahahahaha (I can hardly talk I put Aguero but sod it, they don’t get any points muhahahaha)

Mo getting the golden boot is epic!!
– IndianScouser on the forums

Also, goal and assist today for both Salah and Solanke. Couldn't be better-timed for both.

Absolutely made up for Solanke there. Deserves that goal after a really tough season. Brilliant moment for the guy. What a finish.

Yerrrrrrrss Big Dom! What a strike.

ANDY ROBERTSON HAS SCORED A GOAL FOR LIVERPOOL, I’ve been waiting for this day for so long.

What a time to be alive.

Andrew Robertson scored at last. There’s no man who deserved a goal as much as him this season, surprise package this season fully nailed his LB spot as his own. Bit of a shame that his first goal isn’t at Kyiv as we were praying for him to score. ?

And finally, supporters reflected on the season as a whole and turned their attentions to the Champions League final Top four consolidated and a place in the European Cup final. If you don’t agree that we’ve progressed then unfortunately football isn’t for you.

– Illuvatar on the forums

Well done Reds. Did what we needed to do and some. Bring on Madrid !

Just one team out of 92 has finished the season unbeaten at home, and they play in red managed by Jurgen Klopp. Well in lads, @LFC, you've been great.

Job done. Wrap them up in cotton wool till the 26th.

What an incredible end to our Premier League season. Top four secured, unbeaten at Anfield this season, Mo Salah now the Premier League all time leading goal scorer and a Champions League final on the horizon. Really couldn’t have asked for more. Thank you, @LFC.

Great season that would’ve been a brilliant season with 12 months of Can Dijk and a bit more depth in quality. Now onto the small matter of big ears.

Well what ever happens in Kyiv me and this lot will be back in Europe next season. I love you Liverpool, I do #YNWA @LFC pic.twitter.com/xmjQxppIjE