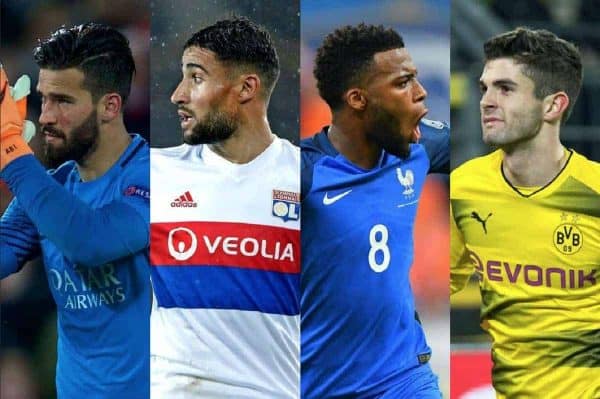 Following Liverpool’s £39 million move for Monaco midfielder Fabinho, the Reds are expected to confirm “at least one more arrival” this week.

The Reds secured their second new addition of the summer as Fabinho joined Naby Keita in Jurgen Klopp‘s midfield overhaul on Monday night.

With news of their interest breaking shortly before the confirmation, the 24-year-old’s signing was a reminder of the unpredictable nature of the transfer window.

And in the aftermath of a disappointing loss to Real Madrid in the Champions League final it was a reminder that Liverpool are still a developing side under Klopp.

The manager is looking to add quality to his impressive squad this summer, and Fabinho is unlikely to be the last high-profile name to head through the Shankly Gates in the coming weeks.

According to journalist and former LFCTV presenter Matt Critchley, the Reds could even finalise further business before the end of the week, as he took to Twitter after Fabinho‘s unveiling:

Expect at least one more arrival at Liverpool this week after Fabinho’s move from Monaco was confirmed earlier tonight.

It remains to be seen whether this was just a hopeful punt from Critchley, but with Klopp eager to wrap up the majority of his signings before pre-season it is feasible.

With the World Cup set to kick off in Russia on June 14, it will be considerably more difficult to seal deals for those touted with moves to Merseyside.

According to French publication L’Equipe, Liverpool are pursuing both Fabinho‘s former Monaco team-mate Thomas Lemar and his compatriot Nabil Fekir.

The Ligue 1 pair have been regularly linked with the Reds but it was widely expected that Fekir was an alternative to Lemar, with Monaco naming a high price for their No. 27.

If both do join this summer, Klopp would have a variety of top-class options for both midfield and attack, ahead of a renewed push in the Premier League and the Champions League in 2018/19.

Goal‘s Neil Jones and the Mirror‘s David Maddock have both reaffirmed Liverpool’s interest in Fekir, with talks expected to develop following the end of the campaign.

Maddock is particularly confident of the 24-year-old joining the Reds, writing that “it is almost certainly a question of when it will happen not if.”

Meanwhile, Jones mentions Borussia Dortmund youngster Christian Pulisic as another target, adding that “Daniel Sturridge will be sold, while Divock Origi may get the chance to prove himself.”

He also touches upon interest in Brazilian goalkeeper Alisson, who the Mail‘s Dominic King claims “Liverpool will look to test Roma’s resolve” with a £60 million offer.

Whether Lemar, Fekir, Pulisic or Alisson are the next to follow Fabinho and Keita to Klopp’s side, it promises to be an exciting summer for the Reds.