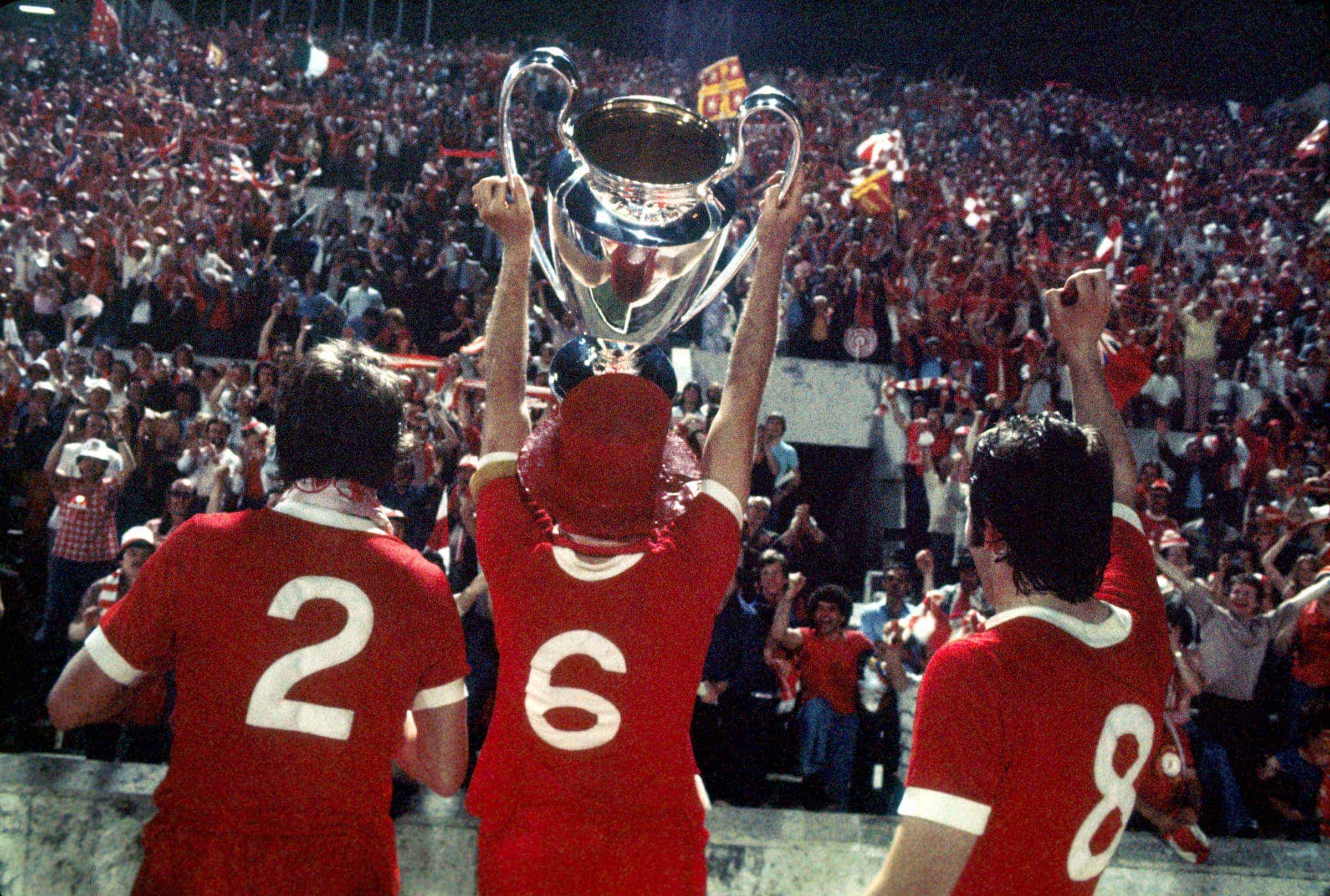 Back in Rome in ’77: The story of Liverpool FC’s first European Cup win

Liverpool FC had won a UEFA Cup under Bill Shankly in 1973 and another under Paisley in ’76, but this was to be their first triumph in the biggest club tournament of them all.

The game was played on a Wednesday and Liverpool had lost the FA Cup final the previous Saturday against Man United, who by this time already had a European Cup in their trophy cabinet after their 1968 triumph.

Paisley’s Reds were spurred on by the fans who’d made their way to Rome by any means possible, and turned the Stadio Olimpico into a home away from home.

Red flags and banners adorned the fan lined areas beyond the running track, and on entering the arena the players began to put their cup final loss behind them.

“When we saw all the red flags unfurled, all thoughts of the FA Cup disappointment went out of our minds — how could we let them down again?” recalled Jimmy Case in his autobiography Hard Case.

“When we got back into the dressing room it was Joe Fagan who quickly summed it up. ‘Bloody hell,’ he said, ‘have you seen that lot out there?’”

The manager, meanwhile, had spent some of the trip recalling the last time he was in Rome, during the Second World War.

Case recalls Paisley’s team talk that day: “The last time I was here in Rome, I was in a bloody tank liberating the place. We beat the Germans then, and you’ll beat them tonight, now come on.”

Liverpool had learnt from their cup final defeat which was a game Paisley later had down as one of very few tactical mistakes he’d made in his career.

They’d been too attacking that day, so for their trip to Europe they decided to revert to the patient passing game which had won them the league.

There were also a few mind games thrown in for good measure.

Though the club knew that John Toshack would not be fit to play in the final, Paisley announced that he would start the game as he’d heard that Gladbach were susceptible to the aerial threat.

“That’s nice, that’s McDermott, and that’s a goal,” came the commentary crescendo from Barry Davies when Liverpool opened the scoring in the first half, the midfielder latching onto Steve Heighway’s pass to score.

Gladbach equalised at the start of the second half when diminutive Danish striker Allan Simonsen pounced on a mix-up between Jimmy Case and Phil Neal.

Simonsen would go on to win European Footballer of the Year that season, ahead of Liverpool’s Kevin Keegan and Michel Platini of Nancy.

With the scores level there fears were that Liverpool would now go behind in a repeat of the Wembley final four days earlier.

This was a more disciplined side, however, but though they were eventually able to regain their composure, an important Ray Clemence from Uli Stielike shortly after the equaliser kept the scores level.

The first came from a Heighway corner, delivered with an approach from the running track which gave the impression he was gearing up to run the 100 meters.

The kick was hit with some venom, and all Tommy Smith had to do was make contact with the ball and the power took the header into the net.

The second came when Kevin Keegan was fouled in the box by Berti Vogts. Phil Neal stepped up to send Wolfgang Kneib the wrong way to seal the win.

You’ll Never Walk Alone rang out around the Olympic Stadium, as Paisley, the players, and the members of the boot room celebrated on the pitch.

The first win is always an important milestone, and Paisley had managed to lift the European Cup just three years after taking over as manager.

The triumph built on the work Shankly had put in during the 1960s and the club would go on to win two more European Cups under the English manager’s stewardship.

He’s one of just two managers to have won the cup three times as a manager, and this period of the club’s history set it up for the high expectations and worldwide profile which benefits it to this day.