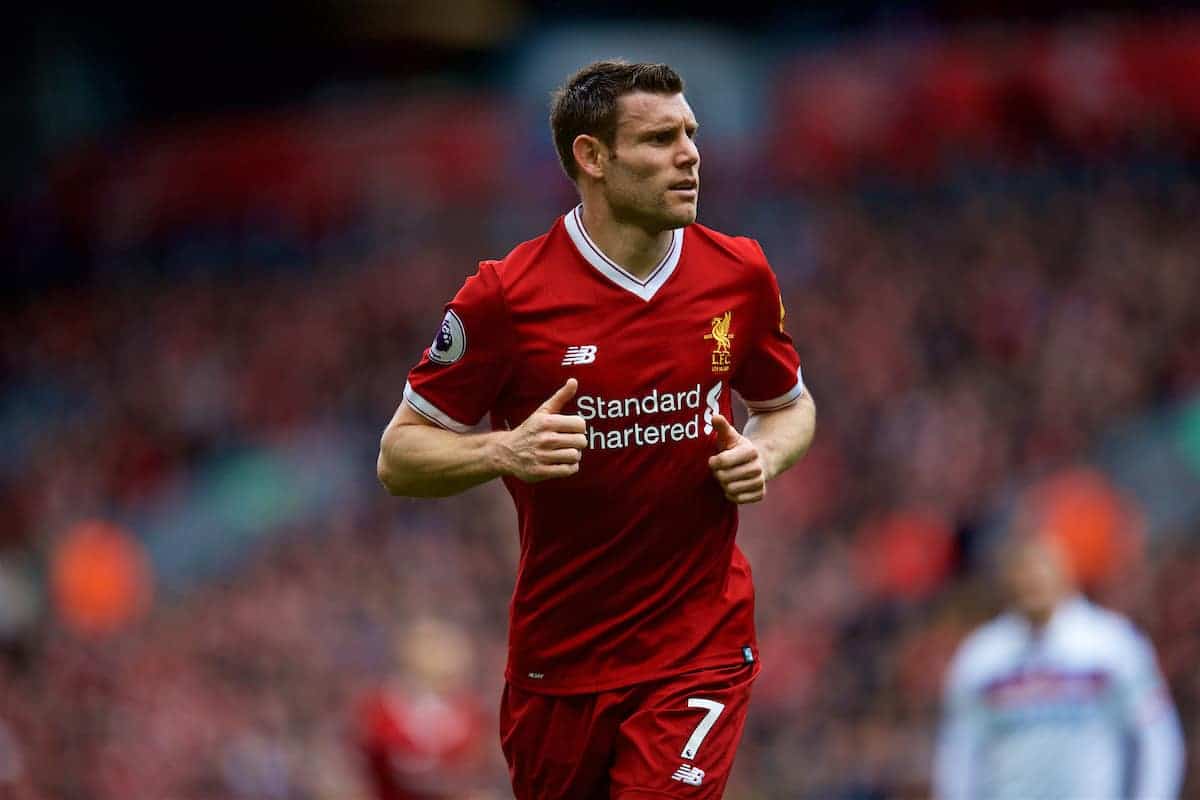 James Milner went from expected squad member to key man in 2017/18, with the veteran showcasing his vast experience as the season progressed.

Last season was one that saw Milner used in an auxiliary left-back role by Jurgen Klopp, which came as a surprise.

After performing admirably there in the opening months, his form dipped and his energy levels sapped, and it became clear that a specialist was required in the summer.

Milner was never keen on his new position, and told Klopp as much, and having returned to midfield in pre-season a squad role looked likely.

What followed was an increasingly influential campaign, though—one that included a personal accolade and almost the greatest team achievement of his career.

Limited Game Time to Begin With As Liverpool’s assault on another season got underway, there were no qualms in the slightest about Milner’s regular place on the substitutes’ bench.

As his 32nd birthday approached, cameo roles were expected ahead of starting berths, with Jordan Henderson, Emre Can and Gini Wijnaldum the preferred midfield trio.

Milner made a key impact from the bench in the first leg of the Champions League play-off away to Hoffenhem, with his dangerous cross diverted into the net by Havard Nordtveit.

It was an otherwise quiet time of things for the 61-cap ex-England international, however, who found himself an unused substitute five times before Liverpool travelled to Maribor on October 17. Milner produced an encouraging showing in the 7-0 rout in Slovenia, with one assist recorded, but was then hopeless at Wembley four days later as the Reds slumped to an embarrassing 4-1 defeat against Tottenham.

A trio of Champions League assists came his way in another 7-0 demolition job at home to Spartak Moscow, and his European performances were outdoing those in the Premier League.

Milner had been an inconsistent figure up until Christmas and early in the New Year, although his influence had grown after a forgettable start to the season.

Much better was to come, though.

Milner may not be the most talented, fashionable player at Liverpool, but he is the one to back most to stand tall when the going gets tough.

He has a wealth of experience, as well as a natural intelligence, and he ended up being so pivotal on the road to Kyiv.

While his league form continued to tick along reliably, he shone brightest in the Champions League, starting with the 5-0 annihilation of Porto at Estadio do Dragao.

Milner excelled all evening in what was arguably the Reds’ most complete display of the season, hitting the post in the lead-up to Mohamed Salah‘s superbly taken finish.

The quarter-final first leg against former club Man City was a mammoth occasion, but alongside Henderson and Wijnaldum the veteran stood tall and outplayed a daunting midfield trio of Fernandinho, Kevin De Bruyne and David Silva.

Described by Ben Twelves as “monstrous” on the night, Milner helped Liverpool to a stunning 3-0 win, providing another European assist—he had also teed up Sadio Mane at Crystal Palace the previous weekend—this time for Oxlade-Chamberlain. After a shaky start in the return fixture, he was magnificent, and having been written off by many back in the summer he suddenly felt indispensable.

Milner also earned great praise for his impact in the 5-2 win over Roma at Anfield, and incredibly his corner that Roberto Firmino headed home meant he broke the all-time record for assists in a Champions League season (nine).

It perfectly summed up the influence the likeable Yorkshireman was having, and his hilarious social media game was also giving him an off-pitch popularity that hasn’t always existed.

In Rome, Milner gave every drop of energy as Liverpool reached the final, and he soon found himself playing the biggest match of his enviable career.

Sadly, he never quite got going as Klopp’s men fell painfully short against Real Madrid, but what a career resurrection it has still been.

This season is one that will always ensure Milner is thought of very fondly by Liverpool supporters, regardless of what happens next.

If Milner is starting regularly next season, something has gone wrong.

That is not to diminish his qualities as a footballer, but at 32 and with Naby Keita and Fabinho already joining the Reds there will be better options available.

Milner will likely know this himself, but he can still remain an important member of the squad, coming in when needed and producing influential displays from the bench.

To achieve success you need players of his ilk around, and it would be a real shame if he chose to move elsewhere.

That feels unlikely, given what an exciting team Liverpool are to be a part of right now, and he still has plenty of fuel left in the tank.

Slowly but surely, he can start to be the Gary McAllister of this side—nurturing younger players, adding quality sporadically and using his experience at the business end of the season.

Milner is a gem.

Best Moment: Recording the most assists in a Champions League season.

Worst Moment: A wretched performance in the 4-1 defeat away to Tottenham.