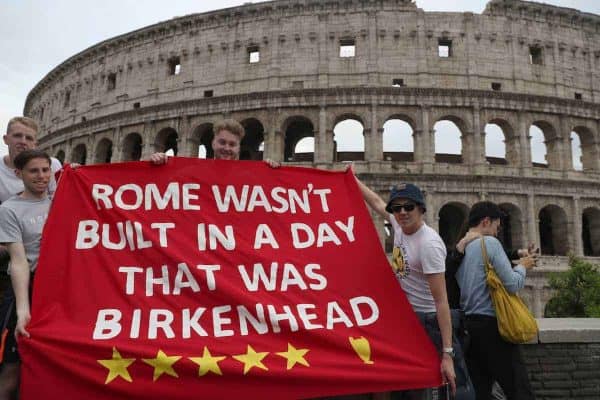 Liverpool fans have headed to Rome in their droves for tonight’s Champions League semi-final second leg—taking a glorious collection of banners with them.

The Reds have a 5-2 lead from the first leg at Anfield, but after Roma’s own famous comeback against Barcelona in the last round, Jurgen Klopp‘s men still need the backing of their fans to complete the job.

That will certainly be the case if the pre-game sights around the city and en-route to Italy are anything to go by.

As ever on a European journey, Kopites from near and far have decked out the host city with flags and banners which will adorn the Stadio Olimpico this evening.

There are old classics, new creations and plenty of witty additions on show, as seen below.

For supporters in Rome, Liverpool this morning issued updated advice, read it here.

Big group of #LFC fans near to the Spanish Steps proudly holding their flag as they get ready for tonight's huge game. They said they're from areas all over Liverpool so I'm sure some of you may recognise them! pic.twitter.com/T42SD70GKE

The boys in Rome #LFC pic.twitter.com/iB7VncW0J8