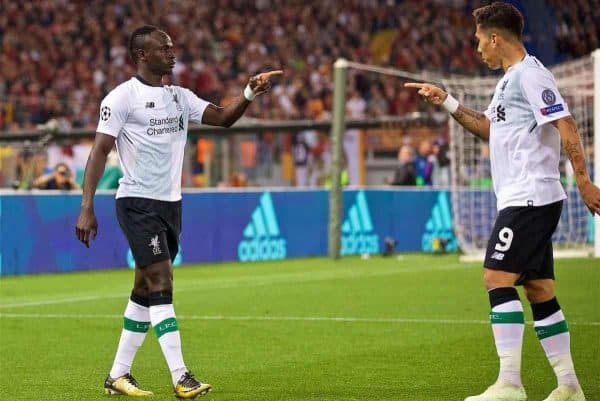 Liverpool saw off Roma in the Champions League semi-final, but what were the best and worst moments in the game and who should be rotated against Chelsea?

The Reds are into the final safely where they will meet Real Madrid in Kiev, but Jurgen Klopp‘s men still have domestic matters to attend to.

Just two Premier League games remain and the Reds have to get a victory in one to be assured of Champions League football next season, regardless of the outcome of the final itself.

Doing the business at Stamford Bridge would be a perfect way to follow up the European progression of the team, leaving Klopp and Co. free to rotate on the final day against Brighton.

This Is Anfield’s Karl Matchett (@karlmatchett) spoke to Reds fans Dave Hendrick (@DaveHendrick_) and Jonathan Higgins (@Jhiggins3) about the highs and lows in Rome and the challenge ahead at the weekend.

DAVE: The best point was our resiliency when Roma piled on the pressure.

The leadership of Van Dijk was huge, something we lacked before he arrived. He organised everything, kept everyone alert and on their toes and made sure that, while we wobbled a few times, we didn’t collapse.

It shows the growth in this team.

JONATHAN: The opening goal and the relief it brought.

Deep down, we all knew then that was the goal that would send us on the right path, a goal that we all craved.

KARL: Having the ability and belief to go there, where no team had scored all season in Europe, and take less than half an hour to do it twice.

The importance of that attacking threat cannot be underestimated.

One mistake from a team who couldn’t afford many, and the Reds pounced.

DAVE: Worst point was the massive gaping valley that we left between Trent and Lovren.

Poor Trent was left out on an island to get roasted. He had no cover from midfield and no help from Lovren.

That will need to be addressed for the final or the lad Real have had on loan from Man United for near 10 years might have himself a field day.

JONATHAN: The worst moment is a mirror image really.

The crappy own goal that almost gave Milner whiplash and almost undid the great start.

KARL: The gaps down the flanks were enormous at times and we cannot assume there will be counter-attacking chances every time the opposition has the ball.

A few individuals had very mixed games and Mohamed Salah was very selfish at times too—not his best game, but we’ll forgive him that.

As Klopp said post-game, too often the offensive chances when three-on-three didn’t lead to the best choices.

…and given the importance of the game against the recent fitness and form of the squad, who should play against Chelsea?

DAVE: I think Clyne should start against Chelsea. Give Trent a little rest.

Klavan in for Lovren because Lovren’s fitness record isn’t great so one game a week is probably best for him.

I think the midfield has to stay the same because there’s no option with Ox and Emre being out injured.

Upfront, we have nobody worth bringing in so Klopp might have to run Mo, Bob and Mane out there again.

JONATHAN: For Chelsea we need to go to the well one last time and ask the lads for one more massive effort.

Even a draw secures Champions League football and means we can put our feet up until the big night in Kiev.

Keep the same XI and then it’s a long rest for them if needed until the final.

KARL: Clyne in because we don’t need to force the game from full-back, but apart from that no real changes.

Would be good to see the subs used a little earlier if possible, depending on the flow of the game, but this one’s really another final of its own.

Get it won, get it done, then some important recuperation and planning can begin.