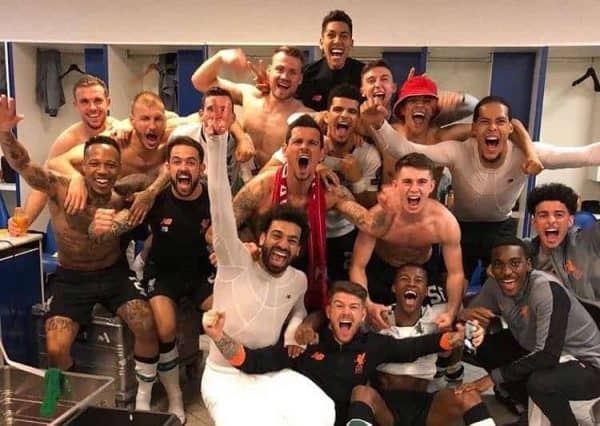 “What a feeling”, ” See you all in Kiev” – Liverpool players react to reaching Champions League final

Liverpool qualified for the Champions League final on Wednesday and the players couldn’t contain their delight after the game.

There were 11 heroes in red at Stadio Olimpico, as Jurgen Klopp‘s side progressed, despite losing 4-2 on a nerve-shredding night.

Their work ethic was magnificent throughout, and Real Madrid now stand between themselves and glory in Kiev on May 26.

The players cut joyous figures on the pitch after the final whistle, celebrating with the fans on arguably the biggest night of all of their respective careers.

They then took to social media to continue the party, with some brilliant posts keeping us entertained as we drank in reaching an eighth European Cup final.

Captain Jordan Henderson is doing a tremendous job in the role, and his decision to bring a banner in support of stricken fan Sean Cox onto the pitch was a special gesture.

Henderson is now just 90 minutes away from being the fifth Red to lift the European Cup, after Emlyn Hughes, Phil Thompson, Graeme Souness and Steven Gerrard…

What a feeling! So proud of everyone to reach the champions league final! Thanks for the amazing support as always!!! #YNWA

Mohamed Salah may not have had his greatest night at the office, but he was loving life after the match, with the travelling Reds in great voice behind him.

Sadio Mane was arguably Man of the Match, scoring the opener and generally causing Roma’s defence all sorts of problems.

Virgil van Dijk produced a peerless display at the heart of the defence, and he shared a great snap of him celebrating.

Andrew Robertson was superb yet again, and the Scot was another who shared a photo of he and his teammates celebrating with the away supporters.

WHAT A FEELING!! Champions league final!!? fans were incredible tonight, safe travels home!! See you all in KIEV….. ?? #YNWA

Loris Karius was an assured figure as he continues to go from strength to strength, and he quoted the already legendary “Allez! Allez! Allez!” song on Twitter.

Gini Wijnaldum finally scored his first-ever away goal for Liverpool, with the 27-year-old choosing quite an occasion to end the drought.

James Milner has already become one of the greatest social media contributors in history, and his dry sense of humour again came to the fore.

Looked like great scenes in the dressing room… I heard them from the drug testing room ?? #waitforme #celebrateonmyown #hopeshowerstillhot

Roberto Firmino led the line expertly in his own unique way, with the Brazilian one of many to post those on-pitch photos that will live with fans forever.

Simon Mignolet, Joe Gomez, Nathaniel Clyne and Alberto Moreno may not have started on the night – Clyne was the only one to feature at all – but the team spirit Klopp has created was highlighted by fringe players expressing such delight.

For the magnificent You'll Never Walk Alone ? For the atmospheric nights ? For the beautiful ‘Allez Allez Allez’ ? For the welcoming of the team bus ?? For every single cheer of every single soul during all these massive games ?? Thank you all, @LFC fans #UCL #YNWA #LFC pic.twitter.com/CQjX6kHEpx

We are heading to the @ChampionsLeague FINAL!! ????? @LFC #YNWA #Liverpool pic.twitter.com/nrBuVzs2Iy

Have a look at @Carra23 @JARiiseOfficial and myself with 10 mins of Magic as close as it gets. https://t.co/LHAJFP0G2a