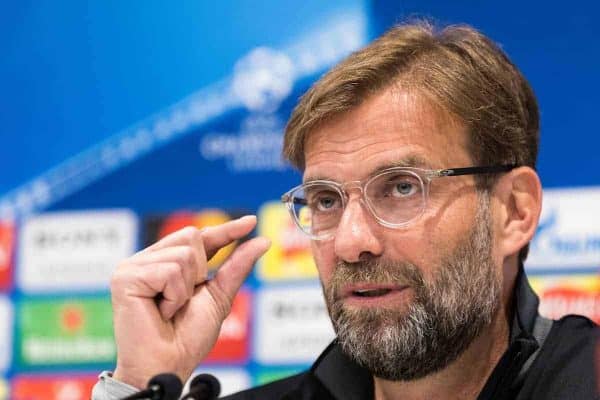 Jurgen Klopp continues to build his squad at Liverpool, but how much stronger is it compared to the last two years?

This is Klopp’s third summer in charge of the Reds, during which time they have blossomed into a formidable side, reaching the Champions League final and securing back-to-back top-four finishes.

There is still work to do if Liverpool are to achieve the holy grail and become Premier League champions, and stay at the top of English football for a prolonged period, but they are heading in the right direction.

Here’s a look at how Klopp’s squad has evolved since his first summer in the Anfield hot-seat.

On paper, the squad that Klopp assembled in the summer of 2016 didn’t look too flawed, with the German making a total of nine signings.

The arrival of Loris Karius seemed to herald the start of a new era in goal – namely, Liverpool having a good goalkeeper for the first time since Pepe Reina’s peak – and Joel Matip looked a shrewd acquisition at centre-back.

Gini Wijnaldum came in to bolster options in midfield and Sadio Mane immediately brought an extra-dimension to a previously one-paced attack.

A nice blend of industry, experience and creativity in midfield also caught the eye, with Adam Lallana expected to kick on after improving upon Klopp’s arrival the previous October.

As has been the case with Liverpool far too often in the Premier League era, a lack of squad depth looked the main concern ahead of the 2016/17 season.

The Reds’ first-choice starting lineup looked strong, with Mane, Philippe Coutinho and Roberto Firmino a potent attacking unit and any three from Jordan Henderson, Emre Can, Gini Wijnaldum and Adam Lallana all effective.

It became clear early that Klopp was going to use James Milner at left-back, which hinted at a lack of faith in Alberto Moreno and not enough options there.

Liverpool looked light at right-back, with Nathaniel Clyne the only established player in that position, and there was no guarantee that Karius and Matip would be immediate success stories.

It was all rather predictable, as Klopp’s men took the league by storm and topped the table in November, but ultimately petered out because of that dreaded lack of depth.

When fitness levels were high and injuries were nowhere to be seen, Liverpool’s football was stunning and they looked like genuine title contenders.

Once they lost the likes of Coutinho and Lallana, however, their rhythm quickly disappeared and the backup options were not good enough.

Mane’s absence at the Africa Cup of Nations hurt the most, with a win-less January highlighting the extraordinary influence he had on the team.

A fourth-place finish and Champions League qualification still meant it was a good season, but tiredness in the spring months made it more nervy than anticipated.

There were many calls for Klopp to spend big in the summer of 2017, but he only signed players he legitimately felt would improve his team.

The most high-profile arrival was Mohamed Salah, who the transfer committee had picked out as a perfect signing. He provided that much-needed extra pace and goal threat that only Mane could previously.

Andy Robertson and Alex Oxlade-Chamberlain were intriguing buys that split opinion, but they brought depth to the group. Dominic Solanke looked an exciting purchase after starring for England’s U20s in the World Cup that summer.

One of the biggest positives was not losing any key men, with Coutinho retained despite endless flirting with Barcelona.

The biggest point of concern undoubtedly lay in goal and at centre-back, where the general consensus that Liverpool were weak there.

Simon Mignolet had finished 2016/17 well, in fairness, but forever flattered to deceive. Karius, meanwhile, had struggled in his first year at Anfield.

Failing to sign Virgil van Dijk, mainly due to the club’s own doing, was deeply frustrating, and not bringing in an adequate replacement saw a hysterical reaction in some quarters.

Matip, Dejan Lovren and Ragnar Klavan were all too hit-and-miss and there was a view that Klopp was risking throwing the season away immediately, as Liverpool battled across four competitions.

It was a memorable year to say the least, and the Reds were one Champions League final victory away from one of the greatest achievements in the club’s history.

The football produced was out of this world at times and Salah’s outrageous contribution of 44 goals turned him into one of the world’s biggest stars.

Mane and Firmino were exceptional, the midfield put in numerous commanding performances and Robertson and Oxlade-Chamberlain’s proved to be superb signings.

Coutinho may have left in January but Van Dijk arrived for a world record fee for a defender, making an unrivalled difference to the shaky back-line.

There were times when that lack of squad depth was annoyingly evident, especially in attack, but the squad was growing all the time, as fourth place was again achieved.

Italics = expected to leave this summer.

It is easy to spurt hyperbole in the heat of the moment, but this now looks Liverpool’s most formidable squad since Gerard Houllier’s in 2000/01.

There is quality in almost every position and this time the options are available to Klopp are far greater.

There is a genuinely world-class defender in Van Dijk and Trent Alexander-Arnold and Robertson are two of Europe’s most exciting full-backs.

The addition of Naby Keita and Fabinho will transform a Liverpool midfield occasionally guilty of being one-dimensional and the attacking trio are unplayable on their day.

This squad will also have gained so much experience from their Champions League run, and it is a generally young group of players who are only heading in one direction.

There is still the goalkeeping issue to address, with Karius’ horrific showing against Real Madrid potentially costing him his regular spot in the team, and Mignolet and Danny Ward may both leave.

Bringing in either Alisson or Jan Oblak would be monumental, but with each day that passes it feels more unlikely, in which case Karius may be trusted. That would be a huge risk.

Similarly, Liverpool can still improve on Lovren at centre-back, despite an admirable comeback from his low point at Tottenham last October.

Klopp is expected to stick with the Croatian, however, potentially signing someone of a similar standard rather than a significant upgrade.

The attack is still not particularly well-stocked, too, with another forward and possibly a stronger backup to Firmino needed.

This has to be a season in which Liverpool make a genuine title challenge.

Not a ‘top at Christmas’ challenge or one that ends with us bemoaning fatigue setting in in March – they must get a lot closer to Man City and show that they can be consistently brilliant for 38 matches.

The Reds have kept onto all of their key players, they have signed two fantastic midfielders and there is more business yet to come.

When you compare the squad to two years ago there have been gigantic stride made all over the pitch and there has rarely been a more exciting time to support Liverpool.

Acquiring a better goalkeeper, centre-back and backup forward would make it the perfect summer.