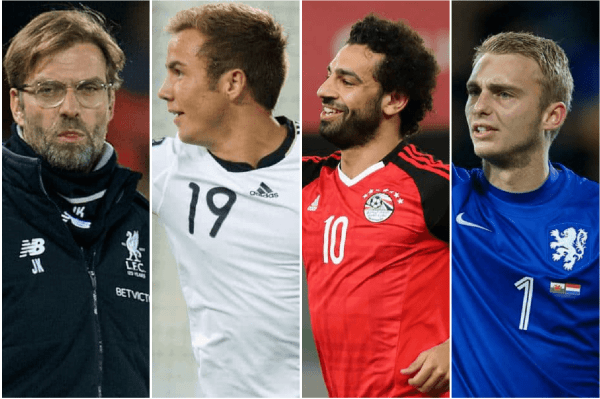 The World Cup draws closer and the transfer rumour mill continues to churn; here’s all the latest regarding Liverpool from the game’s media on Saturday.

Mohamed Salah has claimed he will be ready to play in Egypt’s World Cup opener against Uruguay.

The Reds forward has been missing in action since injuring his shoulder in the Champions League final, and while fears of missing the World Cup entirely were quickly extinguished, it was assumed he’d still miss one match.

Now even that appears to be on the cards, with a fast recovery and the determination of Salah to play a full part giving Egypt a big boost.

They have never won a match at the World Cup finals.

Former Jurgen Klopp protege Mario Gotze has spoken of his admiration for the Liverpool boss, calling him world class.

“I’m still in touch with Jürgen,” Gotze told DAZN. “Of course, he taught me everything about professional football. At that time, I was just 17 and coming up from the youth team. He introduced me to everything. He let me play.”

Gotze also mentioned wanting to link up with Klopp again one day and claimed he didn’t turn down Liverpool in 2016 so much as choose Borussia Dortmund, having had the chance to do either.

His career has been on a downward spiral since scoring in the last World Cup final, with injury and inconsistency stopping him reaching his best level.

The Reds have been strongly linked with a move for Stoke City winger Xherdan Shaqiri in recent weeks, though he remains an option, not a priority.

Asked by Swiss outlet Blick about an impending move to the Reds and what he thought, he replied positively about his potential new home—but stopped short of confirming any rumours.

“I can’t tell you anything right now, I think my agents take care of my future. I’m focusing on the national team right now.”

Shaqiri is at the World Cup with Switzerland and will be up against Marko Grujic‘s Serbia and Roberto Firmino‘s Brazil in the group stage.

Meanwhile, his new boss at Stoke, Gary Rowett, says players will leave who aren’t committed to the cause.

While declaring that “no player will leave unless it’s right for the club,” Rowett will be aware that Shaqiri’s £12-13m release clause makes an exit inevitable.

Alisson ‘too expensive’ for Reds

Liverpool’s interest in AS Roma goalkeeper Alisson is no secret, but latest reports from Italy suggest the move is a no-go.

Calciomercato suggest the Reds are out of the running for this particular new No. 1, due to his price tag being too high.

Already set at €100 million, the report claims, it could rise further after the World Cup should Alisson star for Brazil.

The Reds have also been linked with Jack Butland, Jan Oblak and…

The Barcelona backup stopper has a €60m buyout clause, but Onda Cero claim that the Dutchman will be allowed to leave if the Catalan outfit receive a bid of €40-50.

He wants first-team action next year, and Barca already have backup candidates in mind to replace him.

The Reds, along with Arsenal and Napoli, have all been credited with an interest—and though the report claims there are already offers, it does not specify who has made them.