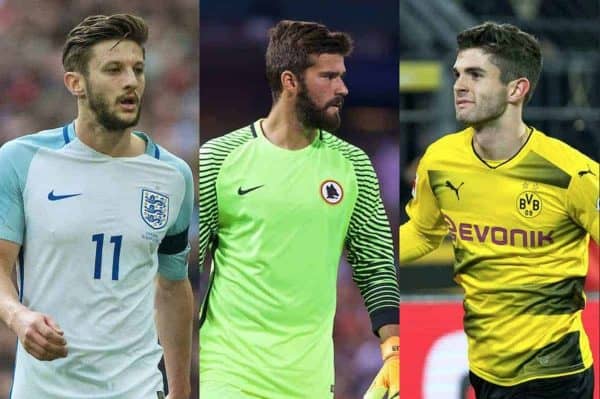 Lallana reported for England duty four days early on Thursday, as he bids to secure a place in Gareth Southgate’s World Cup squad having been initially named on the standby list.

The 30-year-old made only 15 appearances for Liverpool last season, but a 60-minute outing in the Champions League final has boosted his chances, Southgate told reporters on Friday:

“Adam has only trained with us the last couple days. We had several long conversations during the season. It was obviously a hugely frustrating season for him. We know the quality he has.

“The last conversation I had with him, ahead of naming the squad, was ‘let’s keep this alive for you. Who knows, maybe you’ll play a significant part in the Champions League final’.

“That’s exactly what happened. We know there are limitations in terms of how match-fit he is, that’s why he’s been a standby player, to give him time to improve that situation.

“But we’ll have to assess [his chances of a call-up] if there’s an opportunity that arises, but we hope for the 23 lads that are in the squad that that isn’t the case.”

Southgate has few options in terms of creative midfielders, but Lallana’s lack of game time certainly makes him an outside bet.

Are Roma Planning For Life Without Alisson?

Roma goalkeeper Alisson has risen to the top of many Liverpool supporters’ list of transfer priorities in the wake of Loris Karius‘ dismal display in the Champions League final.

With calls to replace Karius with a top-level goalkeeper growing, speculation over the Brazilian’s future in Rome has mounted.

According to Italian publication Corriere dello Sport, Roma are already weighing up moves for a replacement, with Bayer Leverkusen’s Bernd Leno and Paris Saint-Germain’s Alphonse Areola being considered.

Meanwhile, Alisson‘s agent has quashed speculation that a deal had already been agreed with Real Madrid, as purported by Cafu on Thursday.

“The claim that he already has an agreement with Real Madrid is completely false. I do not see how Cafu can know more than I know,” Ze Maria Neis told Forza Roma.

On the subject of a possible contract renewal at Stadio Olimpico he added: “I have not talked to Monchi or anyone else yet.”

Earlier in the week the father of Borussia Dortmund winger Christian Pulisic insisted there was “nothing concrete” in claims the 19-year-old could leave the Westfalenstadion this summer.

Liverpool have been touted as favourites to sign the United States international, with Jurgen Klopp clearly targeting depth in his attacking ranks this summer.

Sports Illustrated journalist Grant Wahl, conducting an AMA on Reddit on Thursday evening, gave his take on Pulisic’s next club.

“If I had to make a pick, I’d say Liverpool, as soon as this summer,” he revealed.

However, Wahl also added that he “could also see him staying in Dortmund another year, and teams like Spurs, Arsenal, Bayern and Man United in the mix.”

Liverpool Among Clubs on Bernard Watch

With Sadio Mane and Mohamed Salah established as firm first-choice options on either flank, Klopp could opt for a cut-price addition to his wide ranks, however.

If that is the case Shakhtar Donetsk winger Bernard could be a possibility, joining Fabinho and Roberto Firmino as part of Liverpool’s new-look Brazilian contingent.

According to Premium Sport commentator Andersinho Marques, the Reds, Arsenal and a host of clubs from China are interested in signing Bernard on a free transfer.

The 25-year-old’s contract is set to expire this summer, and he could be a useful signing for Liverpool, having restored his flagging reputation in recent seasons.

A natural left winger, Bernard can also operate on the right, and scored 10 goals and assisted four in 29 games for Shakhtar in 2017/18.