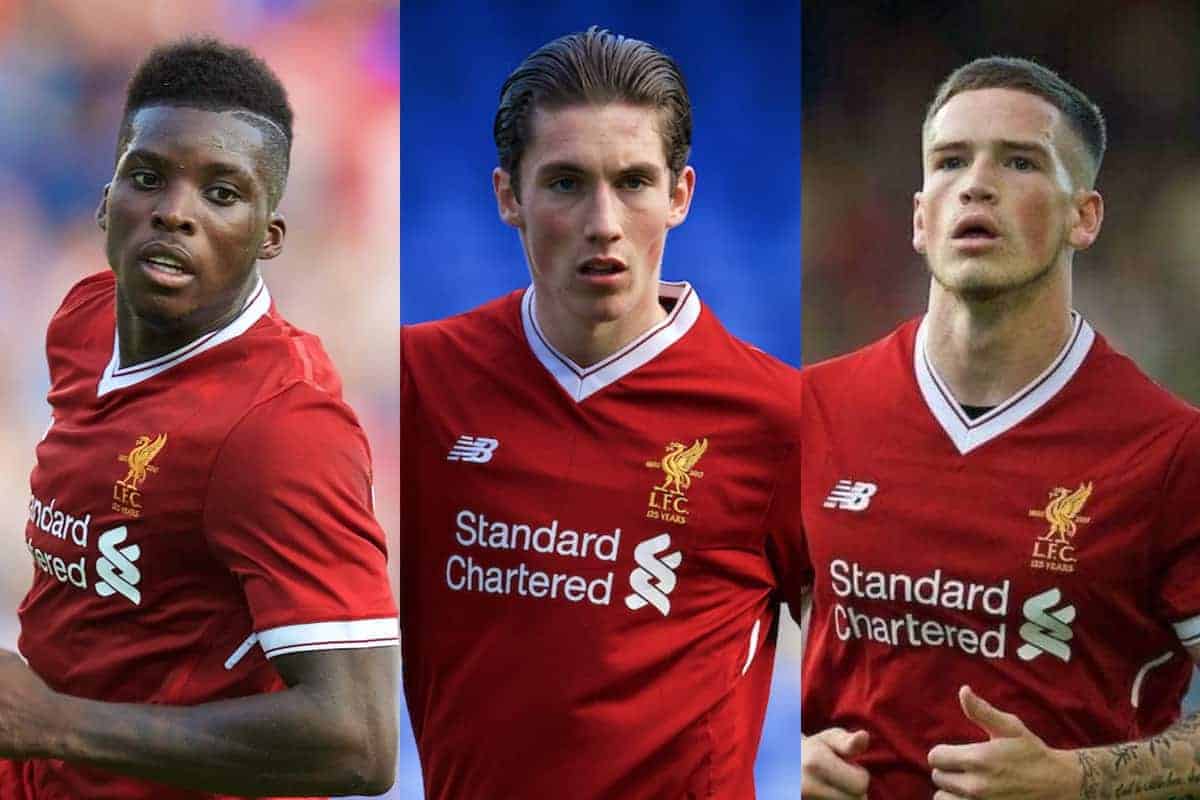 Sheyi Ojo, Harry Wilson and Ryan Kent are facing an uncertain pre-season as they return to Liverpool this summer following mixed spells away on loan last season.

Jurgen Klopp found himself bereft of options when rotating his forward line towards the end of last season, with Danny Ings and Dominic Solanke alternating as cover.

Both natural centre-forwards, they were unable to provide the pace and incision Sadio Mane and Mohamed Salah can on either flank, and it is no surprise to see wingers made a priority in the transfer market.

Gent youngster Moses Simon and Stoke City‘s Xherdan Shaqiri have emerged as possible targets, with the Reds considering a host of options as Klopp bids to add variety to his attacking ranks.

Heading into a busy pre-season schedule that will likely kick off without Mane, Salah and Roberto Firmino, however, there are three interesting candidates already in the Liverpool squad.

Ojo, Wilson and Kent will all be 21 by the time Klopp leads his side to the Deva Stadium to take on Chester on July 7.

And while there is no shortage of interest from other clubs, they face a defining summer as they fight for their futures on Merseyside.

After a mixed season of loan spells and injuries, what comes next for the young trio? On paper, Ojo could be considered to have a strong chance to impress Klopp during pre-season, having made the most appearances under the current manager (13) and being the youngest by at least three months.

When he made his breakthrough in 2015/16, Ojo looked set to blossom under Klopp, averaging a goal or assist every 90 minutes, including a brilliant strike against Exeter City in the FA Cup.

But varying success during loan spells with Wigan Athletic, Wolves and Fulham, scoring seven and assisting six in 54 games over two-and-a-half seasons, have seen his prospects damaged.

His most recent loan, as part of Fulham‘s promotion charge, saw Ojo begin strong and fade away, with a series of injuries blighting his progress at Craven Cottage.

He will come into pre-season having played just 142 minutes of football in four months, and this will immediately put him on the back-foot.

Ojo’s pace, power and end product could see him catch the eye against the likes of Chester, Tranmere, Bury, and Blackburn, however, and he will at least hope to earn a place on the plane to the United States. Wilson’s exploits on loan at Hull City were remarkable, with the youngster settling in immediately at the KC to score seven goals and assist a further four in 14 games.

The Tigers avoided relegation to League One, and Wilson’s performances were central to their success, providing Nigel Adkins with the end product his side had sorely needed mid-season.

He has subsequently established himself as a regular in Ryan Giggs’ Wales side, and has not looked out of place alongside the likes of Gareth Bale and Aaron Ramsey either.

When he reports back to Melwood in July, however, it remains to be seen whether he will be considered so prominently by his club manager.

Prior to his move to Hull, Wilson rarely trained with the first-team squad, instead serving as a leader for Neil Critchley‘s U23s—a side he had so clearly outgrown.

Wilson has proved his ability on the senior stage, and his impressive numbers, versatility and tactical intelligence could see him factor under Klopp yet; unfortunately, a relative lack of pace goes against him. Ryan Kent has endured a strange year, going from surprise star of the summer to the scrapheap via six-months stints with Freiburg and Bristol City.

Speaking at the end of last summer Klopp explained how “this pre-season brought us new players,” adding that Kent had “completely showed up,” and shortly after the winger signed a new five-year contract.

Having spent the 2016/17 campaign on loan with Barnsley, winning their Young Player of the Season award despite a relatively quiet spell, Kent tore up Bayern Munich in the Audi Cup.

The youngster was even tipped to stay at Anfield to serve as capable backup to Mane and Salah, having moved ahead of Ojo and Wilson in the pecking order, but instead the Bundesliga beckoned.

Kent joined Freiburg after convincing Klopp his development would be better served in Germany, but struggling to adapt to Christian Streich’s system he made just six appearances before his loan was terminated in January.

City came calling, but Kent again failed to make the impact expected, and now returns to Liverpool hoping for another unlikely shot at the first team, with his reputation damaged. Klopp is certain to add to his attacking ranks this summer, with Simon and Shaqiri unlikely to be the last touted as candidates for the Reds ahead of 2018/19.

But in Ojo, Wilson and Kent he does have three ready-made options eager to stake their claim this summer; crucially, they are all homegrown, and Ojo and Wilson qualify as U21 players.

This would allow Klopp to flesh out his squad considerably without hindering his selection elsewhere, with Liverpool likely to be short on homegrown players after shedding their deadwood.

Mane and Salah are due to retain their roles as first-choice wingers regardless of the signings made before August 9, which makes recruitment difficult despite scope for rotation.

Turning to the academy may be a solution, particularly with depth required for the FA Cup and League Cup, and possibly if a lengthy Champions League run crowds the schedule in the business end of the season.

The question is whether Ojo, Wilson and Kent are good enough to fill in for Klopp’s regulars without detracting from the efficiency of the system.

Pre-season will be pivotal in determining whether this is the case, and this will likely be their last chance to impress.