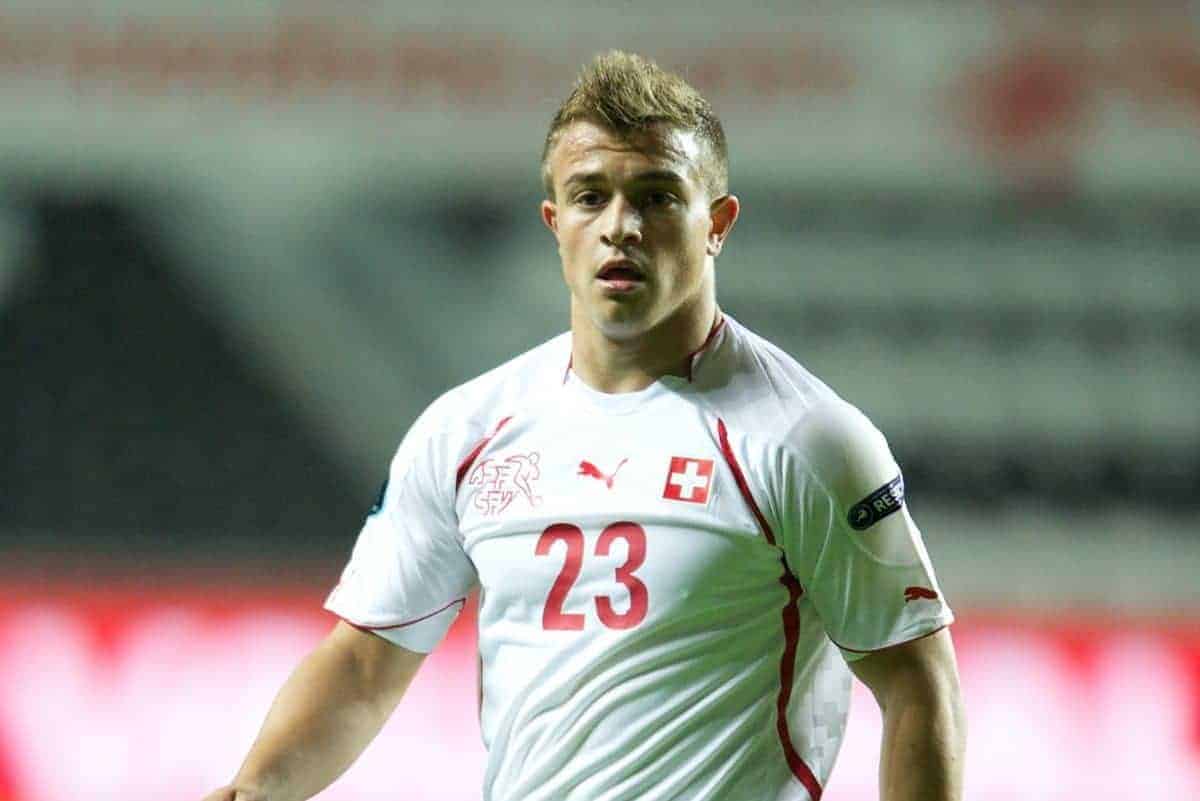 Liverpool target Xherdan Shaqiri laid on the assist as Switzerland drew 1-1 with Brazil on Sunday, but the winger was still not roundly praised.

The Reds have identified Shaqiri as a possible target this summer, and as a result supporters had a keen interest in his World Cup opener.

Deployed on the right flank against a Brazil side featuring Roma goalkeeper Alisson and ex-Liverpool man Philippe Coutinho in midfield, Shaqiri produced a varied display.

At times, the 26-year-old looked at odds with the pace of the game, but he still created the second-most chances (three) of any player behind Neymar (four), including for Steven Zuber’s equaliser.

Shaqiri made more tackles and interceptions combined (five) than any other Swiss player apart from the suffocating Valon Behrami (six), though speaking to beIN SPORTS before the game Arsene Wenger argued that he “does not like to defend”:

“Shaqiri is not a good defender, he is a midfielder who does not like to defend, he is a No. 10.

“I see problems there for Switzerland to stop the left side of Brazil.”

This was a sentiment echoed by Gary Neville who, serving as a pundit for ITV, criticised Shaqiri ahead of kickoff in Rostov-on-Don for being “unprofessional”:

“I’m not a fan of Shaqiri to be honest with you.

“I think that was, to be fair, made worse by the fact that he distanced himself from his team-mates as Stoke.

“They were unprofessional last season Stoke, there’s no doubt, and he epitomised it.

“He could score the goal of the tournament and he could have the most amazing game, but he could also be there for three matches, do nothing and just amble and wobble around.

“To be honest with you with him, players like that I can’t have. I struggle with it.” Shaqiri is certainly a maverick, as Neville suggested, but he was far from the lethargic non-entity both he and Wenger predicted, and provided Switzerland with a key threat going forward.

As Liverpool supporters took to Facebook, Twitter and our forums during and after the game, though, the stance on the Reds’ interest in the winger remained divided.

Some highlighted his unexpected work ethic…

Shaqiri is pressing and just won the ball ??

He gets accused of being lazy quite a lot but Shaqiri has put in a very good shift tonight.

All within the context of a game plan. Hasn't pressed them into submission or tracked back to his own goal line because he hasn't been asked to but he's worked hard and been ready to turn play over quickly on the counter which is perfect for us.

“Looks thinner in a skin-tight, figure-hugging, kit with Switzerland than he does in a baggy, shapeless, loose-fitting top at Stoke. Who knew?”

– Anfield rd Dreamer on the forums.

Lazy opinion & shows you don’t understand football. If you did you’d know each team have their own tactics & just maybe he isn’t lazy?

Shaqiri ran 10.6km tonight & did 32 sprints but he’s lazy according to Liverpool fans.

Clearly he isn’t lazy as he runs within .5km of Mane/Salah average for LFC but his sprints are down.

That comes down to tactics & style more than ability imo.

Let’s see if we get him #LFC

Though others were less impressed with his efforts…

Shaqiri without the ball is awful.

“Anyone watching the Brazil game and still thinks Shaqiri would be a good signing is delusional. Talk about lazy.”

I would fear for Shaqiri's life if he had a preseason under Klopp.

That shaqiri just isn’t for me. His work rate and team ethic is a million miles from what we want and have

“Busy, speedy, tricky…. then he runs out of steam and walks back.

If he can’t run himself into the ground for his country at a world cup, then I’m not convinced Klopp can get him to.”

Thought Shaqiri was awful must avoid at all costs

After watching Shaqiri last night I think Edwards may need to do a virus clean of his computer because something doesnt add up.

But his delivery for Zuber’s equaliser drew widespread plaudits…

That was an unbeleeeeeevable delivery from Shaqiri. Ball almost NEVER gets to that area on a corner, but it's hit so hard and so flat that Brazil can't head it away.

Some corner from Shaqiri that. Wowser

Shaqiri with a great corner tbf

There is no indication as of yet that Liverpool will make a firm approach for Shaqiri, who is available for around £13 million due to a release clause in his Stoke contract.

He would not be signed as a first-choice option, instead as versatile cover for the likes of Sadio Mane and Mohamed Salah, but there are still reservations over his ability to operate within Jurgen Klopp‘s system.

Switzerland are next in action on Friday evening, when they take on Marko Grujic‘s Serbia in Kaliningrad, giving supporters another opportunity to run the rule over Shaqiri.