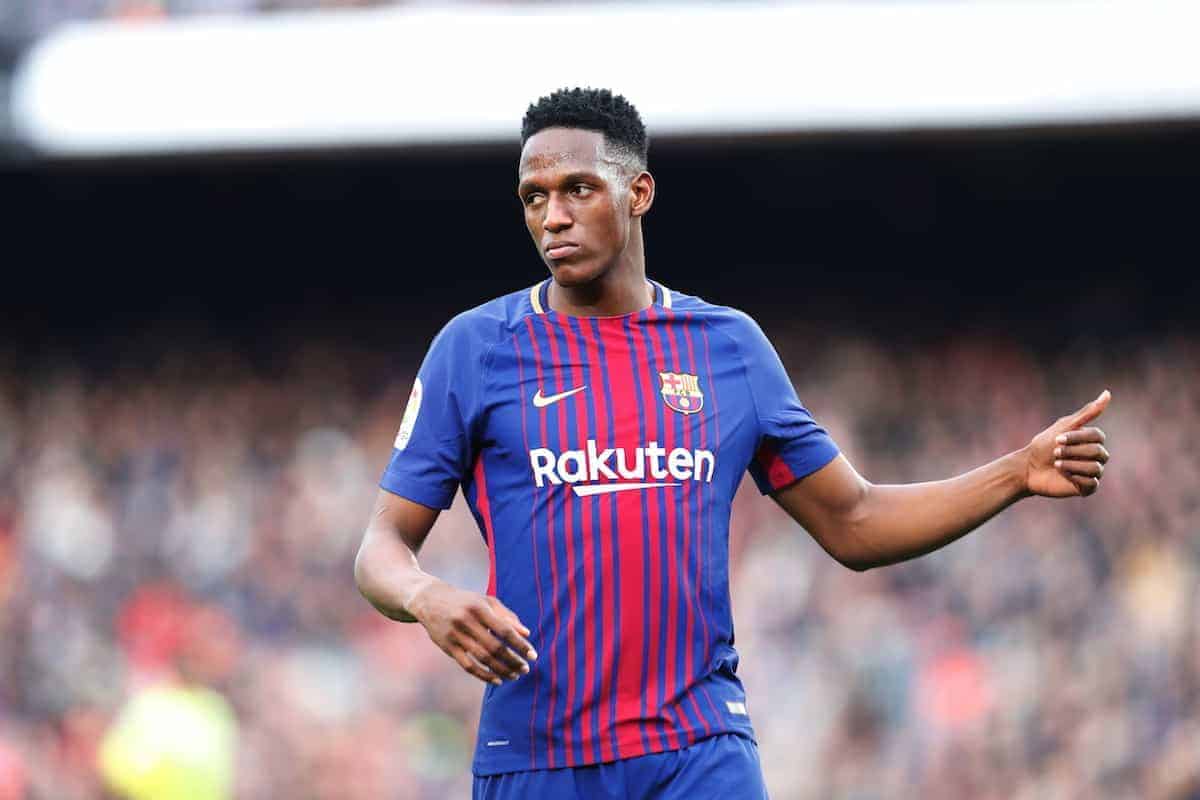 Liverpool have been linked with a summer move for Colombian centre-back Yerry Mina, and his World Cup debut showed why the Reds could be interested.

The Reds are still in the market for a couple more additions to their squad this summer, though Jurgen Klopp‘s midfield is already boosted by the signing of Fabinho.

Add in Naby Keita‘s imminent arrival, and the centre of the park is looking plentiful – but additions are yet to be made at either end of the pitch.

Mina, currently of Barcelona, is one of several who have been linked with an Anfield move, due to LaLiga regulations limiting the number of non-EU players clubs may have.

And his performance against Poland in a must-win game gave a good indicator of where his best strengths lie.

It’s worth noting, first and foremost, that Mina played on the right of the two at the back for most of the game, with Spurs’ Davinson Sanchez the other.

The Barca man was comfortably the more impressive; while Sanchez has struggle in each of his first two appearances at the finals in Russia, Mina came in for this match and immediately impressed.

Despite having missed the group stage opener due to an apparent lack of fitness, he looked sharp, aggressive and ready to go against the Poles, while his concentration at the back was also good.

Robert Lewandowski didn’t get much of a sniff of a chance, with Mina weighing in with three tackles and four clearances during the match.

Mina’s positional work was good, though that positive impression is tempered by the fact Poland’s attack was absurdly poor.

No movement, no runners from deep and no creativity in passing meant Mina’s 90 minutes was largely an easy one at the back.

In possession, Colombia were a fearsome prospect, with Mina one of several who were confident and cool on the ball. The above graphic illustrates Mina’s successful passes, via WhoScored.

His distribution was good from the back, both long and short passing was on show and he wasn’t simply content to dish the ball out to his nearest midfield team-mate.

More than once he looked to move forward into space, taking the first line of attackers out of the game before releasing the ball forward.

If not exactly a playmaking role from the back, Mina was at least a conduit for Colombia’s spells of dominance and impressive attacking play by being willing to find the right pass into space.

He also linked well with his right-back and right-wingers, releasing them at the right time when possible.

That latter was a vital one for Colombia, as he beat Wojciech Szczesny to a cross to head hope the opening goal for his nation.

Already it’s his fourth international goal, with the 23-year-old having won only 13 caps to date.

Having scored nine times in two seasons for Palmeiras prior to joining Barcelona, it’s clear that’s a part of his game which brings an unexpected bonus.

Barcelona certainly need to offload him – due to requiring a non-EU spot – but the question will be whether it’s a loan or permanent deal.

In truth, with the need to constantly replenish the contracts of their highest-earners, Barca would doubtless agree to a sale – with one of their buy-back clauses inserted into the deal.

A year or two elsewhere, and they’d be able to bring him back… if the player agreed, of course.

The Reds will need to move fast if they want Mina’s signature, though.

Spanish publication Sport report that Real Betis want the defender on loan with an option to buy, while big performances at the World Cup will naturally increase interest.

Joel Matip‘s injuries and inconsistency make him far from a guarantee, while Joe Gomez could get a more regular opportunity in the centre.

Ragnar Klavan is reportedly considering his future, not wanting to remain a backup for another year, which is understandable.

One more defender coming in would give Klopp great depth at the back, and Mina is now showing in front of the entire world just why he has attracted interest from Merseyside in the first place.