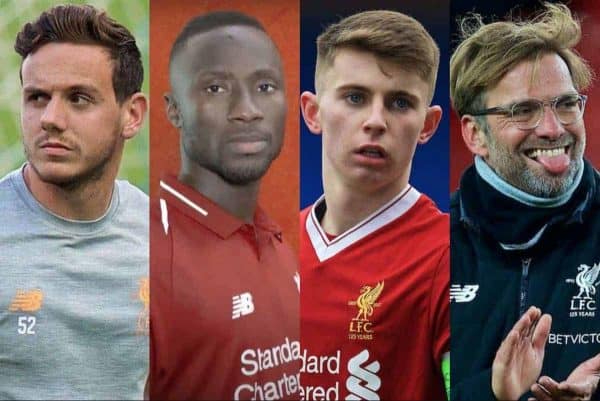 Liverpool kick off their pre-season at Chester on Saturday afternoon, with youngsters looking to impress and new signings hoping to settle in early.

Nothing is definitive in pre-season, and it would be remiss to draw conclusions after the Reds’ opening friendly at Deva Stadium.

But the summer’s preparations can provide an indication of things to come, as well as giving both the squad and Jurgen Klopp an opportunity to make progress ahead of 2018/19.

With a host of key players unavailable due to international commitments, the weekend’s clash with Chester will be an interesting one for supporters.

Here are 10 things we’d like to see from Liverpool on Saturday.

An Opportunity for Ward

While Loris Karius will be the focus between the sticks on Saturday, we will also see Danny Ward given a chance for 45 minutes.

The Wales international spent the majority of last season travelling and training with the first-team squad, but made just one appearance in the League Cup.

With Simon Mignolet currently at the World Cup and expected to leave this summer, Ward can assert himself as Karius’ deputy—and possibly a candidate for the role of first choice.

With Nathaniel Clyne struggling for fitness, Joe Gomez spent last season alternating with Trent Alexander-Arnold at right-back, but Klopp has been vocal about his long-term plans for the 21-year-old.

Klopp sees Gomez’s future at centre-back, and with Dejan Lovren in Russia, Joel Matip in recovery and Virgil van Dijk on holiday, Saturday should see him line up in his preferred role.

He shone there when given an opportunity for England, and would have been part of Gareth Southgate’s World Cup squad had it not been for an ankle injury that required surgery.

Klopp has confirmed both of his new signings will feature against Chester – providing nothing happens in training beforehand – and supporters will be eagerly awaiting debuts for Fabinho and Naby Keita.

The duo are primed to take up key roles in Klopp’s midfield this season as part of a major overhaul that should give the Reds a bigger chance of success in 2018/19.

They are unlikely to show their best form on Saturday, but their presence alone will be worth tuning in for.

Like Ward, after being denied a loan move both in the summer and in January Ben Woodburn was perhaps unfairly overlooked by Klopp last term.

The teenager signed a new long-term contract in October, however, with his manager describing him as having “that perfect balance of talent and attitude.”

He was in eye-catching form in midfield last pre-season, and the hope is he can secure a more regular role in the first team this time around.

Drafted into Klopp’s squad for training in February, youngsters Curtis Jones and Rafa Camacho have become firm fixtures at Melwood and this has continued during pre-season.

Both were included in the matchday squad for April’s 0-0 draw with Everton, but they are yet to make their first appearance for the senior side.

This should hopefully change on Saturday, giving supporters a glimpse of things to come from two of the most exciting prospects at the club.

This summer could prove to be a defining one for three of last season’s loanees, with Ryan Kent, Sheyi Ojo and Harry Wilson returning to Melwood determined to prove a point to Klopp.

The trio experienced mixed fortunes in 2017/18, and based on form Wilson is most likely to secure a long-term role, but they should all be given an opportunity at the weekend.

All best out wide, they could be vying for one role in Klopp’s squad for the season ahead, and their performances early on could be pivotal.

With both Danny Ings and Daniel Sturridge set to depart on a permanent basis this summer, Klopp will assess the merits of Dominic Solanke and Divock Origi as understudies to Roberto Firmino.

Origi is more experienced and has already scored 21 goals in 77 games for the Reds, but a misfire on loan at Wolfsburg last season may have seen him fall behind his youthful counterpart.

While an inability to do so in the first friendly of pre-season won’t be fatal, both Origi and Solanke can improve their prospects by scoring at the Swansway Stadium.

Klopp almost exclusively deployed a 4-3-3 formation last season, and the arrivals of Fabinho and Keita seem tailored to suit this moving forward.

But there is a chance that the manager has different plans for the campaign ahead, either in terms of the system or the individual roles of his players.

While no verdict can be delivered after a 90-minute warmup, there could be signs of Klopp’s intentions for the season on show in Chester.

With Zeljko Buvac conspicuous in his absence at Melwood this week, the returning Pepijn Lijnders has taken up an influential role on the training field and the Dutchman is believed to have taken over as Klopp’s assistant.

Lijnders has led training drills and sessions, with his hands-on approach allowing Klopp to take a backseat as he flexes the tactical nous refined in a half-season with NEC Nijmegen.

His reputation as a coach proceeds him, and Lijnders can make an impact as Klopp’s lieutenant on the touchline on Saturday—starting as he means to go on.

A Positive Reception for Karius

Karius’ productive campaign was brought to a sickening end in Kyiv, with the German’s concussion prompting a nightmare display in the Champions League final.

This has sparked widespread calls for Klopp to sign a replacement, while an ill-advised and poorly timed PR move on Instagram has diminished Karius’ reputation further on the eve of Liverpool’s trip to Cheshire.

But with the 25-year-old currently set to retain his place as No. 1, a positive reception is required, and he can boost his chances with a promising, front-footed outing.