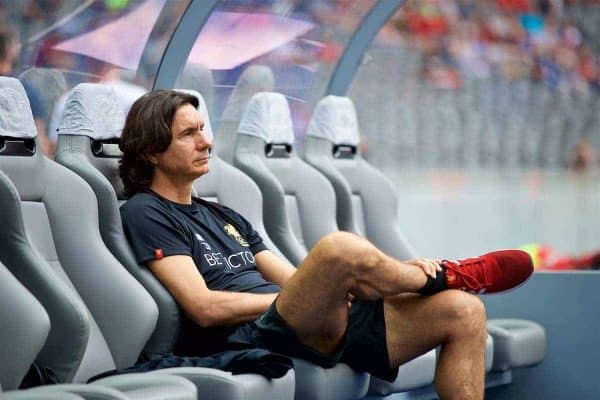 Latest on Zeljko Buvac’s future as Liverpool begin pre-season without Jurgen Klopp’s No. 2

Zeljko Buvac was not present at Melwood as Liverpool began pre-season training on Monday, with Jurgen Klopp‘s assistant having departed in April.

The 56-year-old left his role towards the end of last season with widespread reports indicating he had taken a leave of absence due to personal reasons.

Buvac was subsequently linked with managerial roles at both Arsenal and Fenerbahce, though both positions have since been filled by Unai Emery and Phillip Cocu respectively.

With the Reds back in training ahead of the 2018/19 campaign, Klopp was joined by his regular backroom staff of Peter Krawietz and John Achterberg, as well as the returning Pepijn Lijnders.

But his long-serving No. 2 was not in West Derby on Monday morning, as it seems increasingly likely he will leave his position as assistant manager.

According to the Mail‘s Dominic King and the Mirror‘s David Maddock, Buvac is expected to vacate his role, with Liverpool not set to hire a replacement.

This would suggest that Klopp is instead overseeing a reshuffling of the ranks, possibly with Lijnders promoted as his new right-hand man.

The Dutchman previously served as elite first-team development coach, bridging the gap between academy and first team, but left to take over as manager of NEC Nijmegen in January.

Lijnders was sacked by the Dutch side in May after failing to guide them to promotion to the Eredivisie, with his return to Liverpool confirmed at the beginning of June.

His experience as a first-team manager, and his desire to take up a top position, makes it feasible that Lijnders is assigned as Klopp’s assistant, though a collegiate approach is also possible.

Head of fitness and conditioning Andreas Kornmayer has taken up a more focal role in recent months, while Krawietz’s 17-year association with Klopp makes him indispensable.

Buvac is contracted to Liverpool until 2022, ensuring the club would require significant compensation if he does leave for another job.