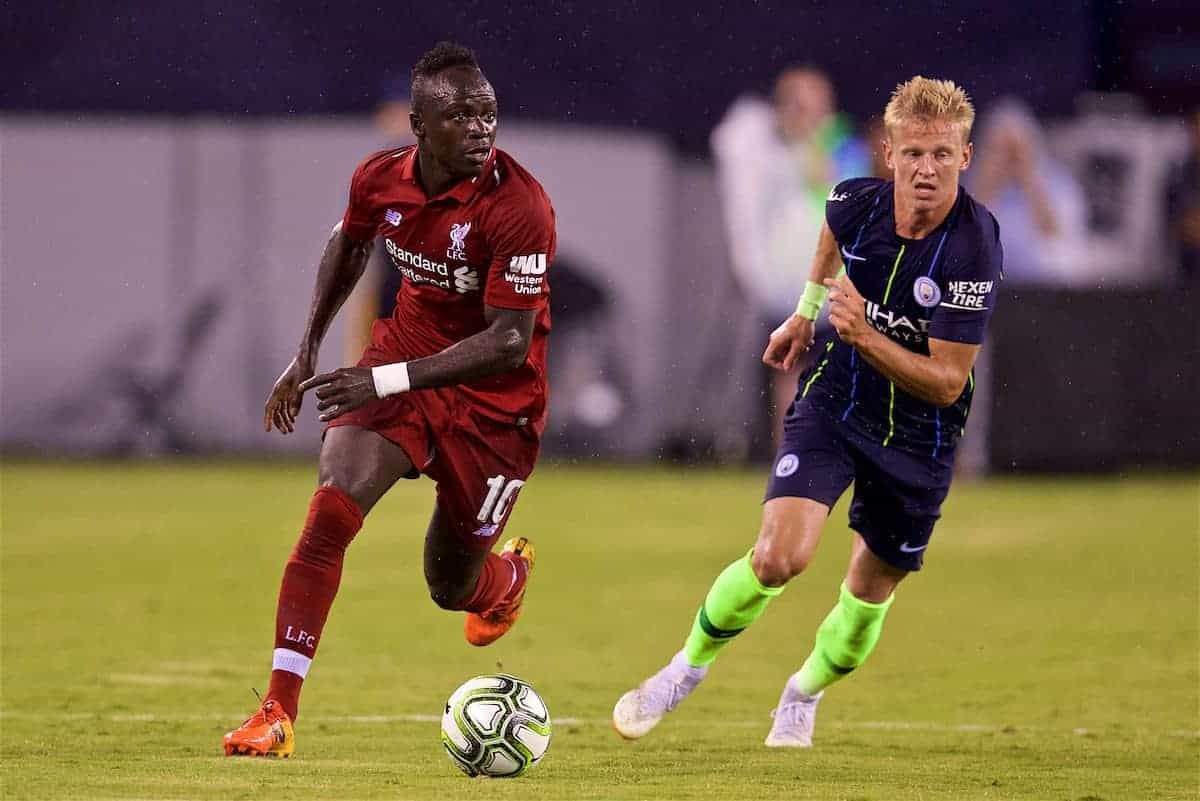 Mohamed Salah and Sadio Mane inspired Liverpool to a 2-1 win over Man City on Thursday morning, following a stunning second-half showing from the pair.

The Reds tasted victory in their second game in the International Champions Cup, following the 3-1 defeat to Borussia Dortmund on Sunday.

A dire first half at the MetLife Stadium saw the two teams head in goalless at the interval, before Leroy Sane broke the deadlock in the second half.

Salah equalised barely a minute after being introduced, however, and Mane’s last-gasp penalty prevented the game from going to a shootout, after Dominic Solanke was clattered inside the box.

It was a richly deserved win for Jurgen Klopp‘s side, who were superb at times in the second half, both in terms of pressing and passing.

Unsurprisingly, the devastating pairing of Salah and Mane were praised endlessly…

My math is typically pretty poor, but I think Mané and Salah together on the pitch average something like 317 big chances created per 90 this preseason

Sadio and Mo are on another level in their first appearances of preseason. Everyone is on notice. They're fucking coming for you.

It's absolutely critical that #LFC have a backup for the quality of Sadio Mané the number 10.

That was extraordinary stuff from Salah and Mane in that second-half. Streets ahead of most of the players on the pitch.

Second half was an absolute pleasure to watch. Absolutely rinsed City for the last 30 mins. Would have been a shame if we didn’t win it. Salah and Mané looking ridiculously sharp. Great to see.

Last-minute winner for Liverpool. Sadio Mane nets from the penalty spot. It's been a really good second half from him and Salah.

Well in lads a quality performance from @LFC and a deserved win ????@MoSalah?, brilliant as usual, changed the game for us and Sadio mane finishes it off overall everyone played well today…….. come on lads!!!!!???

This is not building up a young player, it is simply an observation. Curtis Jones has been Liverpool's biggest eye-catcher here. He's had a good pre-season & this is more evidence of it.

Curtis Jones just has that swagger about him.

Curtis Jones is our wildcard for the upcoming season. What a baller.

A couple of youngsters done really well tonight. Nat Phillips and Curtis Jones. Also reckon Kelleher will be a good keeper. Got potential and made a couple of good saves tonight

A general assessment of the performance saw fans happy overall

• Curtis Jones was our best player in the 1st half
• Karius didn’t make a mistake (happy for him)
• Fabinho, Sturridge, Camacho played well
• Salah making an impact scoring in 53 seconds, unlucky not to have 3
• Mane winning the game in the no.10 shirt ??

“Really impressed with the usual 2, apart from them Dom provided a good foil, Camacho IMO is in front of Clyne and Woodburn, Chirivella and Grujic dominated the midfield – great last 20 mins.”

Bad performance in the first half, but much better in the second. Mane and Salah showed how good and important they are, and could have scored more goals! Also a good game from Jones, Grujic and Woodburn!