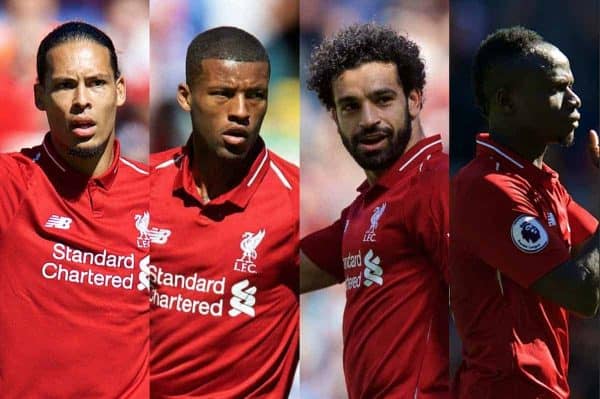 Liverpool returned to winning ways in pre-season with a 2-1 comeback victory over Man City in New Jersey, with several seniors making a first appearance.

Jurgen Klopp‘s team had to come from behind to secure the win, with all the goals coming in the second half.

Mohamed Salah netted barely a minute after coming on to cancel out Leroy Sane’s opener, and Sadio Mane scored the winner from the penalty spot in stoppage time after Dominic Solanke was fouled.

With two-thirds of the US tour over now, Klopp will be pleased to be gradually getting more of his regulars onto the pitch for game time.

Here are the players who particularly stood out for the Reds against City, at both ends of the scale.

The first 45 minutes were largely drab and somewhat difficult to watch, with a shocking pitch not helping matters.

City’s youthful XI actually enjoyed better spells of possession, but when the Reds were on the ball there was one clear dangerman they looked to: teenage attacker Curtis Jones.

Playing from the left of the front three, Jones was again an effective figure among his more experienced peers, getting two or three shots away and playing some lovely passes on the diagonal.

His movement was just as impressive as his technique and he almost netted a diving header just near the end of the first half, coming in off the blind side of the City defender.

Another impressive run-out from Jones, who is certainly catching the eye this summer.

A quick word for Gini Wijnaldum, too, who looked energetic and forward-thinking with his runs in his first start of the summer.

Struggles For the Seniors

Not that Klopp will be too bothered given the context of the game—pre-season, all the training, a delayed flight back from Charlotte and so on—but a few had a below-par game at the MetLife Stadium.

Virgil van Dijk had a less-assured game in terms of his on-the-ball work, misplacing early passes and being stripped by Sane for the opening goal.

Alongside him, Joe Gomez was hit-and-miss too, perhaps partly still coming to terms with his positional switch in from full-back.

Andy Robertson was also somewhat unusually lax on the ball and was caught out defensively at times.

Further forward, James Milner wasn’t particularly influential in midfield, but the state of the pitch and a lack of buildup play from the Reds contributed to that.

Again, Klopp won’t be unduly worried about performance levels in this particular game.

No question about when the excitement levels took a turn for the better in this match: the half-time introduction of Mane, and the on-the-hour glut of substitutions which saw Salah make a first appearance too.

It took Salah less than a minute to find the back of the net and 10 minutes offered ample evidence to suggest both he and Mane are ready to carry on where they left off last term.

Mane was excellent with his movement, always creating space for the diagonal pass behind the defence, while Salah could have had a hat-trick.

The buildup play was faster in the second half, there was far more pressing and the Reds really swamped City for the final 20 minutes of the match, passing up several chances.

Much of that superiority was due to Mane and Salah’s appearance and the understanding they have together.

It wasn’t just the big names who impressed in the second 45 minutes, though they were a clear level above.

Marko Grujic came on to play a No. 8 role in midfield and his power and confidence was quickly visible, with the giant Serb shouldering opponents aside as if on a playground against kids four years younger.

It remains to be seen whether he lingers this season, but he could be one to watch in the next couple of games at least.

Rafa Camacho again impressed from right-back, goalkeeper Caoimhin Kelleher made one particularly good save from Sane at 0-0 and Nat Phillips looked very assured in defence once more.

A mention, too, for Ben Woodburn, who had arguably his best outing in pre-season so far.

Playing from central midfield, he led the press intelligently and impressively after the break, harassing City’s players and winning back possession multiple times.

A good second period from the Reds overall and a deserved win in the end—now onto the challenge from the opposite half of Manchester!