Liverpool wrapped up their tour of the US with a 4-1 hammering of Man United, with several players impressing for Jurgen Klopp‘s team.

After losing to Borussia Dortmund in the first game Stateside, the Reds have been able to enjoy back-to-back wins over Manchester clubs in the past few days.

Sadio Mane and Sheyi Ojo scored penalties either side of Daniel Sturridge‘s side-footed effort, before Xherdan Shaqiri wrapped up the game with a spectacular bicycle kick.

The Reds head next to France for a training camp, where Roberto Firmino will begin his pre-season with the squad, with the next friendly scheduled for the Aviva Stadium in Dublin against Napoli.

With the start of the new Premier League season drawing close, here’s a look at who impressed and who failed to shine against United in Ann Arbour.

Liverpool were vastly superior in the first half, despite the 1-1 scoreline at the break.

Much of that was down to the difference in attack at either end: United relied on Alexis Sanchez to do all the running, with little support, while Sadio Mane and Mohamed Salah both made their first starts for the Reds.

Despite barely having featured in pre-season so far, the duo look immediately back on the same wavelength, linking up regularly and swapping passes with ease.

Salah won the penalty which Mane converted, but they both fed each other for half-chances a number of other times.

Elsewhere, Fabinho was quietly impressive in a dominant midfield role.

Once more at the base of the Reds’ central trio, his passing was incisive and his defensive awareness impressive, on and off the ball.

More than once he filled in at centre-back when a defender was out of position, and a few snidey pre-season fouls have been cynically wonderful to see—a little less niceness will go a long way in some matches. 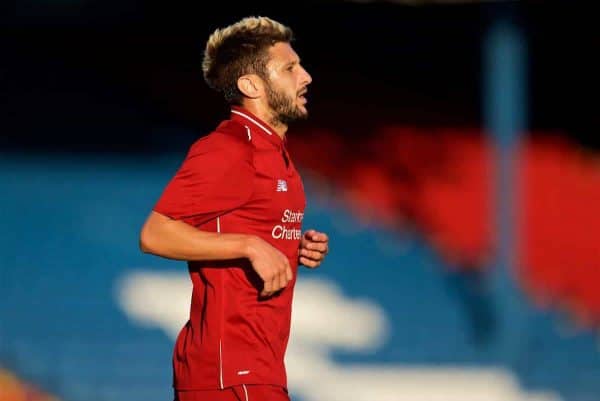 Over the 90 minutes, Liverpool largely impressed and there can be few causes for complaints.

Put bluntly, pre-season or not, the feel-good factor of hammering the club’s biggest rivals should ensure that even those who were below par can take a step forward in optimism and playing a part in a worthwhile result.

Still, while some caught the eye for speed of thought and technique, others lacked in both departments a little.

Adam Lallana still doesn’t look back to full sharpness, hindering rather than helping the Reds’ quick link play in the final third at times.

Similarly, Dominic Solanke just isn’t quite on the same level as his fellow forwards, scuffing the ball rather than striking cleanly or reacting just too late to impact. 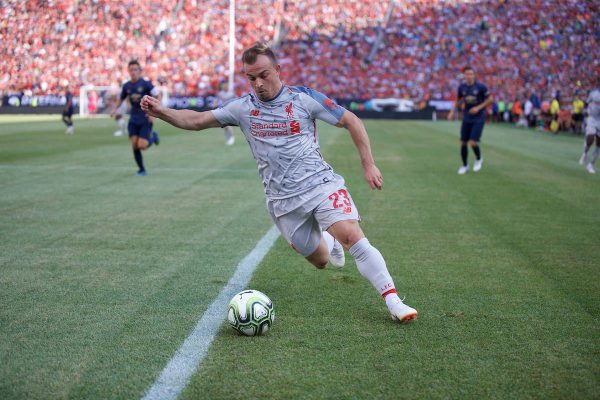 No doubt about who had the most memorable outing: Xherdan Shaqiri‘s debut was one to remember, even in a non-competitive setting.

An assist, a goal, a surprise roving central role—what an impact from the new Swiss signing.

His spectacular overhead kick actually came moments after a complete air-shot, but a couple of neat crosses, some good runs beyond the striker and an ability to hold up play in the final third were also all worthy of note.

It’s also interesting to see him having quickly linked up with Sturridge, who has similarly immediately dovetailed with another new arrival this summer in Naby Keita.

Shaqiri might well be at Anfield to provide backup to the wide forwards, but clearly Klopp sees him as being able to impact from a second striker or attacking midfield role too.

After a slow start, the second 45 was actually just as vibrant a performance as the first half, particularly in the last half-hour.

Sturridge was a clear stand-out, with his movement and touch looking on-point once more. He scored right-footed, almost curled in another soon after and generally looks a real menace in the forward line, which is great to see.

Ben Woodburn also deserves a mention, having really stepped up his performances in the past couple of games.

He was rather poor earlier in pre-season, so this was another nice reminder of how vast his talent is.

Elsewhere, Sheyi Ojo was again forward-thinking and direct, if a little one-dimensional with his play from the right, while Nat Phillips continues to look remarkably assured at the back.

Truth be told, from a purely defensive technical standpoint, he’s probably been the second-best centre-back across pre-season for the Reds.

There’s much more to it of course in terms of making the grade and becoming a serious option for Klopp, but the young defender should be delighted with his contribution so far this summer.