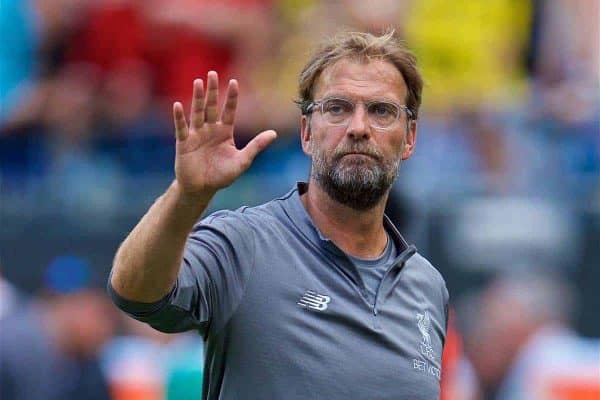 Jurgen Klopp has detailed Liverpool’s plans to repay local supporters before, during and after Tuesday’s friendly clash with Torino at Anfield.

The Reds head to Dublin to face Napoli on Saturday evening, before hosting their last pre-season game of the summer against their second Serie A opponents.

It will be the first time Jurgen Klopp‘s side have taken to the Anfield turf since the 4-0 win over Brighton on the final day of last season.

Klopp has already spoken about the opportunity to “give back” something to the fans on Tuesday, having spent a chunk of pre-season on tour in America.

And he has now further detailed to LiverpoolFC.com why the game was arranged to be held at Anfield, saying “it’s a really important game for us, it’s not ‘some game’—to show up with our supporters.”

The manager revealed that there will be a different structure to the usually matchday—a real treat for those fortunate enough to go to the match:

“We will do things around the game we usually don’t do.

“I will go somewhere on stage for a short interview before the game, the World Cup players will do the same.

“After the game we will sign shirts and stuff like that, all these things that aren’t possible in a purely competitive game.

“It’s a really important game for us but it’s still a pre-season game, so we want to combine it.

“I really hope we see us all together because from my point of view we want to do things like that more often in the future.”

Liverpool have announced further details, explaining a series of events for a family fun day, with events taking place at various locations, including Liverpool ONE’s Chavasse Park, Stanley Park and the Family Park on Anfield Road:

From 10am, Chavasse Park will play host to various fun activities and entertainment, such as face painting, live music performances, a chance to meet the club’s official mascot, Mighty Red, and much more. Fans can also show off their skills during mini football games and challenges.

Fans will also gain the opportunity to see LFC Legends, Ian Rush and Robbie Fowler, take part in a question and answer session hosted by Capital FM’s Baz Todd, from 2pm. They’ll also get the chance to see local musician, Jamie Webster, take to the stage in the afternoon, along with other bands throughout the day.

Over at Stanley Park, an Open Goals session will be taking place between 3.30pm-5.30pm, hosted by the club’s official charity, Liverpool FC Foundation. Qualified football coaches will be running fun activities and games for all ages, including Quick Cricket, Ultimate Frisbee, Orienteering Games, Hot Potato, Cat and Mouse, Bean Bag Throw, Frisbee Golf and much more.

In the run up to kick-off, the Family Park on Anfield Road and Paisley Square will be open from 3.30pm on Tuesday 7 August, so supporters can soak up the atmosphere of Anfield before the game. Fans visiting the Family Park and Chavasse Park could also be in with the chance of winning a spot at a meet and greet session with some of the team.

Not to be missed, Reds manager and first team stars will spend some time greeting and interacting with fans off the pitch, before and after kick-off.

At full-time, players will also be handing out gifts and golden tickets, giving lucky Reds fans unforgettable Anfield experiences, such as invitations to Open Training sessions. Plus, there will be chances to win* meet and greet sessions with the team via a prize draw for those who purchase tickets to the game from now until Friday.

Tuesday should be a great occasion at Anfield, allowing supporters to meet their heroes and gain more access than they often would once the Premier League season is underway.