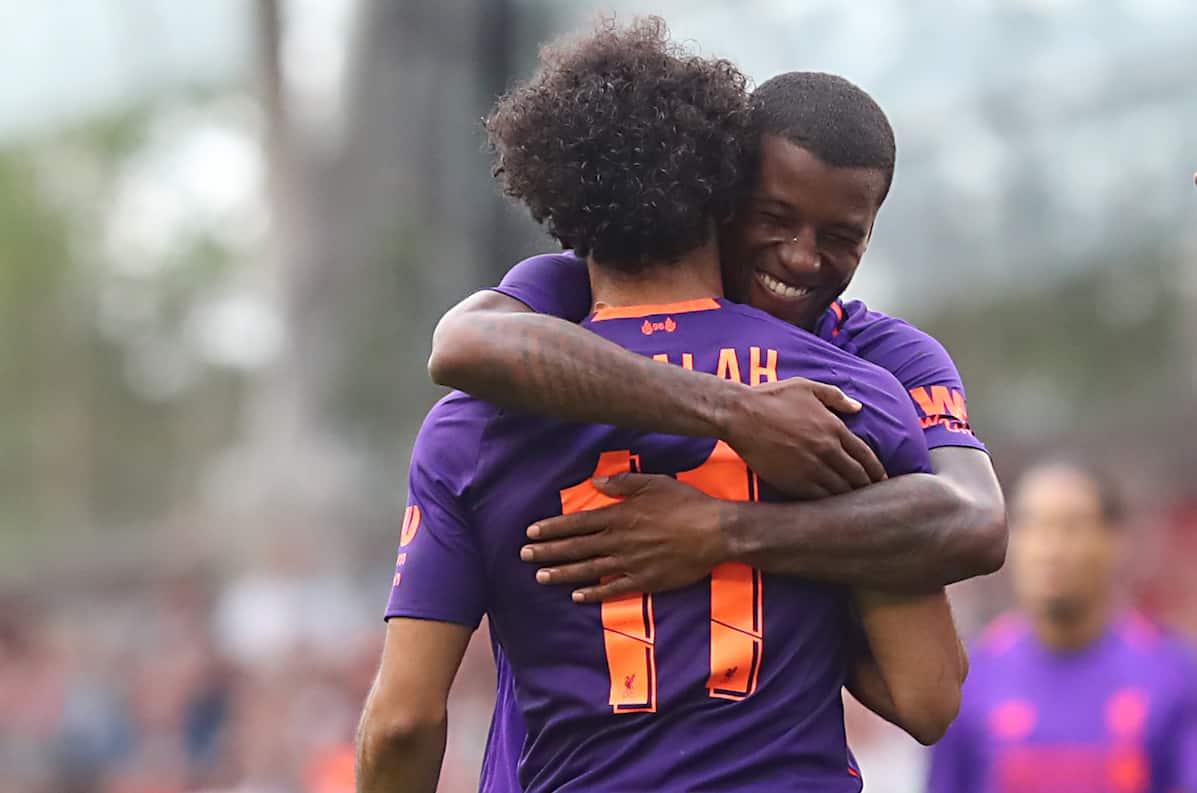 Liverpool secured a comfortable 5-0 victory over Napoli in Dublin on Saturday, with Alisson’s highly anticipated first appearance in goal the talk of the town.

Jurgen Klopp‘s charges put Napoli to the sword in front of a packed-out Aviva Stadium in their penultimate pre-season match in what was a fine attacking display from the men in red.

Napoli had yet to even acclimatise before James Milner handed Liverpool the lead in the early stages of the opening term, with Gini Wijnaldum adding a second in quick fashion after heading home from close range.

The Reds emerged from the break with renewed vigour as a further three unanswered goals hit the back of the net, with Mohamed Salah, Daniel Sturridge and Alberto Moreno all etching their name on the scoresheet.

It proved a comfortable and rewarding afternoon for Liverpool as Alisson was offered his first taste of action, while Trent Alexander-Arnold made his return from the substitutes’ bench.

While Alisson was a little shaky on his debut, his distribution had many salivating…

That ball from Alisson!? Christ, he’s our attacking midfielder, isn’t he!

So nice to have a keeper that’s picking out a pass rather than just booting it down field.

“What a fricken ball by Alisson to Salah. Alisson is going to create points for us, let alone save points.”

Alisson has Quarter-Back levels of vision and distribution. It's a joy to watch.

Alisson has been a little shaky at times in that first half. Not had many shots to deal with but a couple of misjudgements could have been costly. There would be nothing worse in the season half than for him to make a mistake that led to a goal. #LFCPreSeason

The confidence playing out from the back that first 45 minutes hasn’t been seen since reina left. That all comes down to a world class keeper in alisson. Will make our attack even more deadly #LFC #LiverpoolNapoli

Some nice touches from Alisson – in particular that ball to Salah in the build-up for the opener – but he’s looked a little shaky in this first half. Understandably adapting to his new surroundings.

James Milner continued to impress supporters with his tireless displays…

Very much enjoying Milner’s late career reinaissance. Keeps getting better the deeper he goes into his 30s. He’s a machine.

“Shame about Milner. Hope he is ready for the first prem game. He has been brilliant in pre season.”

– geebo on the forums.

Milner doesn’t get older, he gets younger.

“If this is any sort of sign of what’s to come, I can’t wait till next Sunday…”

Pre season or not, we’ve just beaten Serie A runners up Napoli, 5-0.

With a week to go to the new campaign, I think you can abandon all it's-only-pre-season caveats and confidently state that this is an incredible Liverpool team. They'll need a bit of luck to bring in silverware, but it's going to be a fun season.

“What a wonderful debut for Alisson. Liverpool really showing their class against Napoli. 5-0. Really a great all around showing from our lads.

We certainly look to have the quality to challenge for the title this year! :-)”

Honestly this Liverpool team is something else, I've said it before but the team spirit is beautiful. Naby Keïta, who has only just come in, feels like he's been with the squad for years.