England U21s manager Aidy Boothroyd admits Dominic Solanke‘s lack of playing time at Liverpool is becoming a cause of concern.

Solanke joined Liverpool with a glowing reputation in 2017, having starred in England’s U20 World Cup triumph, taking home the prestigious Golden Ball award in the process.

A towering striker but one with a good touch and underrated pace, the 20-year-old was an exciting capture, having opted to leave Chelsea for more first-team opportunities.

Solanke’s first season on Merseyside was a disappointing one, however, and it took him until the final day of the Premier League to register his first and only Reds goal to date, against Brighton.

In total, the youngster managed just 583 minutes in the league, and 709 minutes in all competitions, often looking out of his depth leading the line.

This is starkly contrasting from his loan spell with Vitesse Arnhem two years prior, in which he played 1,990 minutes over 27 appearances, scoring seven goals.

A first appearance this season is still yet to come Solanke’s way, including for Liverpool’s U23s—he hasn’t even made a matchday squad for the first team.

England U21s boss Boothroyd admits he is a fan of the striker, but is worried that a lack of football is hindering his progress, as he told the Telegraph:

“Our players have proved they can do it at international level but not as many of them as there should be are getting the opportunity to do that in the Premier League.” 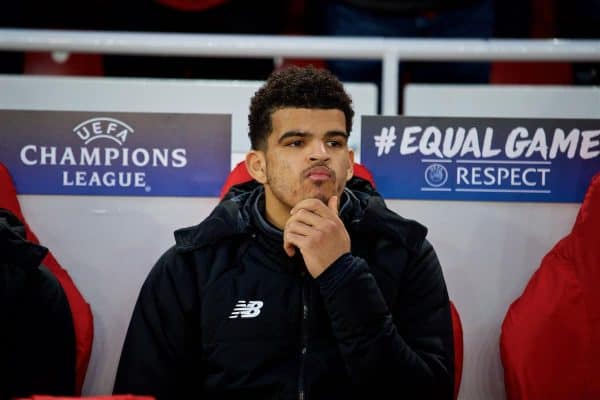 Solanke was tipped for a summer loan move away, in order to continue maturing as a player, but he ended up remaining at Anfield.

Current evidence suggests that he is going to feature very sporadically, with Roberto Firmino first choice and Daniel Sturridge leapfrogging him after a return to form.

Pushing Solanke back down to Liverpool’s U23s feels like a big step back, but it may be beneficial for the time being—as both Divock Origi and Rhian Brewster will be vying for a senior role too.

Gareth Southgate will still be eyeing him as a future England player, while Boothroyd will also clearly be monitoring him closely.

A call-up is only going to come his way if he features more prominently, however.

At just 20, there is no reason to panic, but as the Reds look to become one of Europe’s major forces, he must ensure he doesn’t get left behind.