Roberto Firmino’s return to full fitness could tempt Jurgen Klopp to give Liverpool an extra attacking dimension against Southampton.

The Reds look to make it a magnificent seven straight wins and six from six in the Premier League to continue building a title push.

Key to doing so will be avoiding any complacency against lesser opposition after the big performances produced in statement victories over Tottenham and PSG.

The excellent form of the core squad used across the first six wins will see Klopp keep selection consistent—though he faces an interesting conundrum on his use of Firmino and Daniel Sturridge.

Here, we take a look at how Liverpool’s starting XI could look against the Saints.

Contenders to Come in & Possible Changes

Liverpool’s flawless form means the starting team is sure to boast a very familiar look.

Though it is unlikely a totally unchanged side will feature, it is safe to assume the impressive defence will be kept intact.

Meanwhile, there are changes for Klopp to consider in midfield and attack to keep things fresh.

Firmino is back to full availability after starting on the bench against PSG and seems set to start.

The interesting dilemma presents in whether the No. 9 comes in for Sturridge or alongside him.

Naby Keita looks in line to return to midfield after watching the Champions League win from the bench.

But after all excelled against the French side, Jordan Henderson, James Milner and Gini Wijnaldum will hope to keep their places.

After a third sub outing on Tuesday, Xherdan Shaqiri will hope to finally make his first start, while Fabinho will be looking to build on his last-gasp debut.

On the injury front, Dejan Lovren has returned to training but Klopp confirmed the Croatian isn’t ready for matchday involvement.

All other known absentees remain out, including Adam Lallana, Alex Oxlade-Chamberlain and Divock Origi.

Though the fixture schedule has ramped up and it is a third game in a week, it makes perfect sense to avoid too many changes and keep things strong.

Wednesday’s League Cup clash with Chelsea provides the ideal chance to rotate and give those starved of game time so far a chance to impress.

And with another vital three points needed to maintain the early charge, the Reds should be at nothing other than full strength to guard against avoidable slip-ups.

Minor adjustments are still likely to come just to inject that bit of freshness, and they could be made with personnel switches in midfield and attack.

The re-energised Keita should start, with Henderson the main contender from Tuesday’s central unit to make way after his full-throttle effort against PSG.

After his match-winning heroics and return to full fitness Firmino should take over from Sturridge, who deputised superbly but now, more than ever, needs managing to ensure he plays a part going forward. 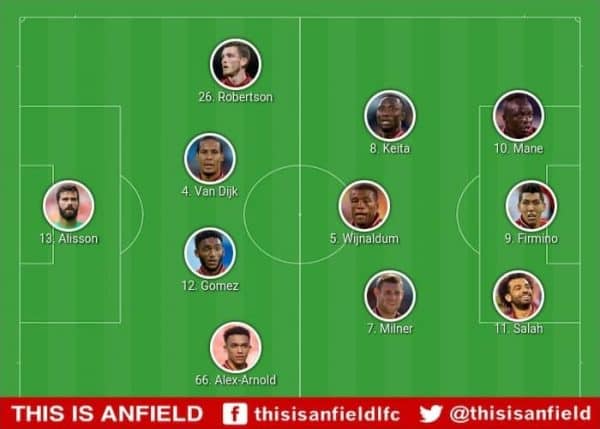 It may still be early in the season but Saturday’s clash is a must-win, with it critical that the Reds follow the victory at Tottenham with a routine three points at Anfield.

In a game Liverpool will dominate there is a case to be made that a more attack-minded XI should be deployed in attempt to ensure victory arrives.

And Klopp, not normally one to give much away on selection, suggested it could as he talked up the potential of playing Sturridge and Firmino together in his press conference.

It would certainly give the Reds a partnership full of goals and creativity, and also a front four to really put Southampton to the sword.

Switching to a 4-2-3-1 formation would make it possible, with Sturridge leading the line with support from Firmino as No. 10, and Mane and Salah from wide.

It would force a reshape in midfield and Henderson could sit alongside Keita, with two aggressive pressing machines in place to compensate for the overloaded attack. 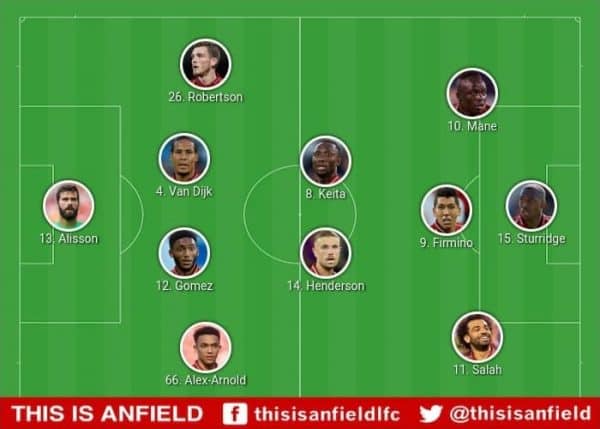 Whichever way Klopp decides to go, the Reds will have the firepower needed to follow recent statement results with a routine three points against the Saints.