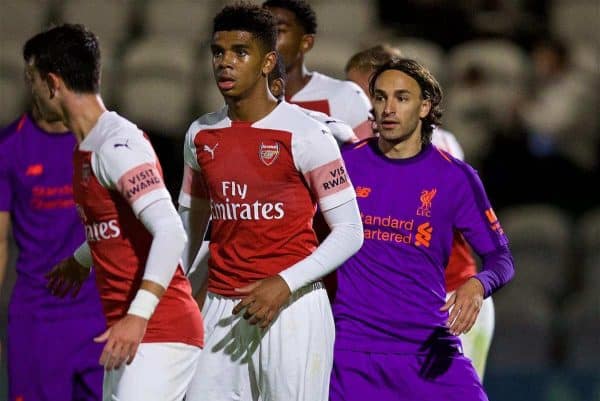 Liverpool U23s slumped to a 4-0 defeat to Arsenal on Friday evening, with some poor defending proving very costly.

There was also a place on the substitutes’ bench for exciting youngster Edvard Tagseth—a player hailed by Steven Gerrard during his stint as U18s boss last season.

It was Liverpool who enjoyed more of the ball early on, with Arsenal, managed by former Gunners favourite Freddie Ljungberg, happy to sit deep.

Tolaji Bola brought down Adekanye just outside the penalty area, with the Arsenal man fortunate not to see a red card. He wasn’t even booked, bizarrely, and Adam Lewis curled the resulting free-kick just wide.

Millar blew a wonderful opportunity to play in Adekanye after a flowing counter-attack and Deyan Iliev saved from Rafa Camacho.

Despite Liverpool’s early dominance it was Arsenal who took the lead, with Bukayo Saka finishing well past Grabara from close range.

It was dawdling of the highest order, with the centre-back losing the ball directly in front of goal.

Tyreece John-Jules came extremely close to putting Arsenal out of sight shortly before the break and was then superbly denied by Grabara.

Tony Gallacher replaced Millar at the interval, with lots of work to do for Liverpool.

Grabara was again busy at the other end, making another important stop, and Adekanye almost reduced the arrears, squeezing an effort narrowly wide.

The speedy winger was then denied on the line as the Reds upped their game, with Iliev making a smart save to keep out Markovic’s header.

Grabara, comfortably Liverpool’s best player on the night, twice made saves to keep his side in the contest, but time was fast running out.

Markovic, whose attitude appeared questionable throughout, missed a gilt-edged opportunity with the goal gaping, and was substituted for Glen McAuley soon after.

Joe Willock finished in slick fashion and Nketiah got his second of the game in stoppage time, putting the icing on the cake for Arsenal.

It was a bitterly disappointing night for Critchley and his players, compounded as Adekanye was stretchered off late on with a knee injury.

The defeat means the Merseysiders have won just one of their opening six Premier League 2 games this season, drawing three and losing the other two.