Liverpool were far from their best on Saturday, but clinical finishing and a few solid individual displays ensured a 2-1 victory over Leicester City.

The Reds’ trip to the King Power followed the trend of their previous two Premier League clashes, having fought for the three points against both Crystal Palace and Brighton.

Not since the opening weekend’s 4-0 thrashing of West Ham—who have subsequently proved to be in limbo under Manuel Pellegrini—have Jurgen Klopp‘s side looked wholly convincing.

But with goals from Sadio Mane and Roberto Firmino, Liverpool were able to maintain their perfect record and a place at the top of the table, despite Alisson‘s error handing Rachid Ghezzal a consolation goal.

Besides his costly mistake, Alisson was one of Klopp’s standout performers in the East Midlands, with Joe Gomez providing the No. 1 with a formidable shield on his fourth outing at centre-back.

Mane and Firmino themselves were impressive in stages, while Andy Robertson provided a welcome thrust down the left flank, combining with James Milner.

But how did journalists, statisticians and supporters assess the Reds’ 2-1 win? 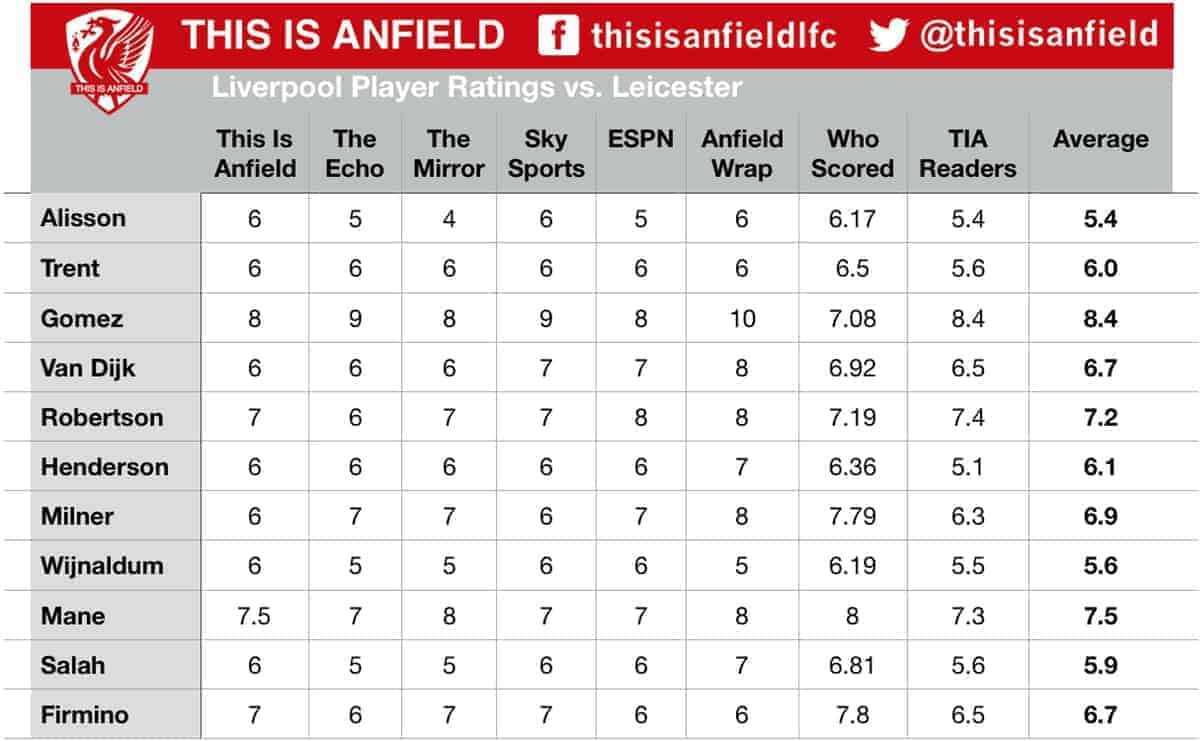 It comes with no surprise that Gomez (8.4) leads the way in terms of average ratings—the 21-year-old was imperious at the back, belying his lack of experience in his new role.

Tellingly, no other player was rated at higher than an eight out of 10, with only Mane (7.5) and Robertson (7.2) receiving a rating of seven or higher.

Milner (6.9) is the next closest, with Firmino (6.7) not far behind, but it is clear that this was widely considered a below-average performance from the Reds.

Alisson (5.4) is perhaps unfairly rated as the worst player from Saturday, although his error did lead to a goal for the Foxes.

In terms of statistics, Gomez does not lead the way, with Mane, Firmino and Milner instead the standouts for WhoScored.

Mane, who netted the opener to ensure he ended Saturday as the Premier League‘s leading goalscorer, is highlighted for an unusual feat, having won more aerial challenges (four) than all but one player on the pitch: Virgil van Dijk (five).

In the creative stakes, no player created more chances for the Reds than Milner (three), though both James Maddison and Marc Albrighton were equally influential for Leicester.

And Firmino led the charge from the front for Liverpool, making five successful tackles—the joint-most of any player alongside Harry Maguire.

Saturday’s result was one of fine margins, and fortunately Klopp’s side were able to capitalise as they closed out any major opportunities for the hosts and emerge with another three points.