Alex Oxlade-Chamberlain is sidelined for the season through injury, but Liverpool captain Jordan Henderson believes he’ll still have a big part to play.

A serious knee injury sustained late last season will keep the midfielder out for well over a year all told, with Jurgen Klopp not expecting to be able to call upon the No. 21’s services in 18/19.

It was hugely devastating to lose Oxlade-Chamberlain at such a moment, in the run to the Champions League final, as his form had been superb beforehand.

Henderson knows it will be difficult for his team-mate to watch on from the sidelines as the team continues to push for major honours, as he told the official Liverpool FC magazine.

But at the same time, the skipper says Oxlade-Chamberlain is pushing hard with his recovery and has the mentality to deal with the setback.

“It’s very difficult for Ox. The great performances he was putting in before he got injured made it one of the best periods of his career so far. So to get injured for such a long time is hard to take.

“The type of lad he is, he’s very positive, very good to be around, and he’s remained like that. I’m sure he’ll have his moments at home and maybe here at Melwood when the lads aren’t here, but whenever I speak to him he’s always positive and he always looks good.

“He’s a great lad and I just hope he can keep getting stronger and get back to us as soon as he can, because he’s a massive, massive player for us.”

While it might be next season before he’s back on the team-sheet, Henderson doesn’t believe it will take Oxlade-Chamberlain long to win back a starting berth once he’s fit. 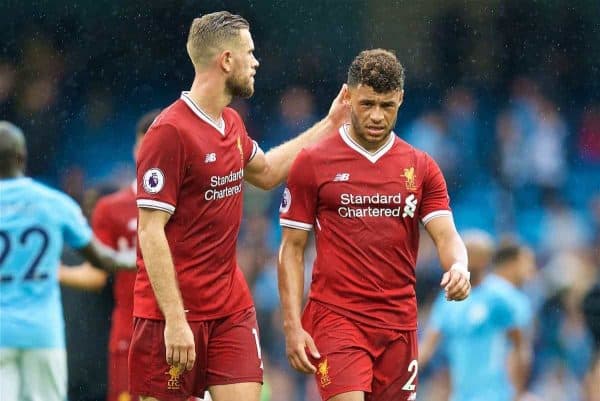 “I’ve played with Ox for a long time, from England U21s upwards, and I knew how good he was then. It was a massive bonus that we signed him and I know he will come back stronger. When he does and he gets back into his rhythm, he’ll be straight back in.

“So, fingers crossed he keeps going the way he has been because I think he’s progressing well with his rehab. Hopefully that will continue because Ox has got a big part to play whenever he is back.”

The Reds have missed his bursting runs forward this season, and all fans will be keeping their fingers crossed that he returns to action, whenever that is, capable of the same levels of performance as previously.