Steven Gerrard has shown great leadership and the will to win synonymous with his Liverpool career with a ruthless “big club” address to his Rangers squad.

Gerrard has presided over a mixed start to life in Glasgow, as while his side are top of their Europa League group after three games, they are fifth in the Scottish Premiership after nine.

They can move as high as second with a victory over Wednesday night’s opponents Kilmarnock, however, but there is no guarantee of three points at Ibrox.

After losing 1-0 to Aberdeen in the Scottish League Cup on Sunday, Gerrard warned he would target “better quality” players if his current crop don’t step up in these situations.

This was posed to ex-Liverpool midfielder Jordan Rossiter in their shared press conference on Tuesday, to preview the midweek tie.

And stepping in to take the question, Gerrard delivered a statement that both showed his formidable presence and helpfully defended the 21-year-old, whose injury problems absolve him.

“I’ll answer that: it’s a warning,” he said when Rossiter was asked if his criticism was a ‘motivational’ tactic.

“[The question] is for me that, not him. He’s been injured for two years.

“At a big club you expect big players to step up on big occasions and provide big moments.

“If that doesn’t happen, at any big club, the manager and the recruitment find better players or players who will do that.”

This was an excellent response from the manager, who was previously Rossiter and full-back Jon Flanagan‘s captain at Liverpool.

Loan duo Ovie Ejaria and Ryan Kent were promoted to the first team after Gerrard left for LA Galaxy, and were arguably not the subject of his ire after the weekend’s defeat.

But regardless, this showed the lessons Gerrard learned as he worked under the likes of Gerard Houllier and particularly Rafa Benitez, despite their cold relationship off the pitch. 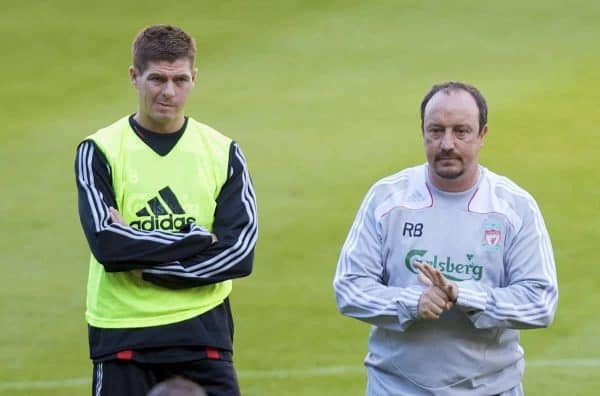 Watching Gerrard speak as a manager is hugely impressive, as he draws from his experience at a top-level side as a player, as well as stamping his own imprint in his new role.

Earlier in the press conference he explained how “the first thing I do, even as a player, is self-reflect: what did I do? What did I get right? What should I have done differently?”

“And I also have confidence and the belief in myself that I’ll help get the team back into that position again,” he added.

His next challenge is up against Killie manager Steve Clarke, first-team coach during Kenny Dalglish‘s second reign at Liverpool, and victory would show Rangers’ response to his delivery.