Liverpool have concerns over the availability of Sadio Mane ahead of the Champions League game at Paris Saint-Germain on Wednesday.

The Reds’ No. 10 played the full 90 minutes at Watford over the weekend, ending the game as centre-forward.

He was heavily involved as the Reds ended up scoring three second-half goals, but is now a concern for Jurgen Klopp as the squad prepares to head to France.

Mane is suffering from illness, reports on Monday evening suggested, leaving doubts about whether he would even travel with the club at all.

Klopp is due to hold a training session with his team at Melwood on Tuesday, before the Reds set off for Paris.

Pre-match press conferences and a final training session will be held in France—with Mane currently due to appear alongside the manager to speak to the media.

But his participation in the game is now in question and it would leave Klopp with a tactical quandary, given what the No. 10 offers the Reds both on and off the ball.

Mane recently signed a new long-term contract with the Reds and is a key part of the front line.

He has scored seven goals in 17 games this term, making him the team’s second-highest goalscorer after Mohamed Salah.

And the Senegalese international hit 10 of his 20 strikes last season in the Champions League, playing a huge role as the Reds strode to the final in Kyiv. 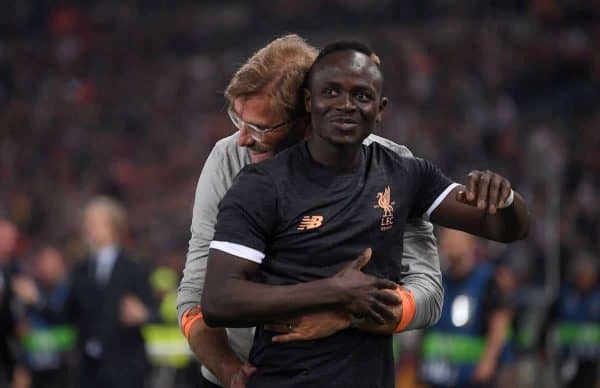 Should he be missing on Wednesday, the obvious solution would be to play Xherdan Shaqiri from the left, perhaps drafting in an extra midfielder for a switch to 4-3-3.

Reports suggest Klopp will give Mane every opportunity to sufficiently recover from his illness and play, and it would be a huge blow if the Reds had to take on the Ligue 1 champions without one of their biggest attacking assets.