Jurgen Klopp could decide between an offensive or secure selection as Liverpool look to reach the Champions League knockout stage with victory against PSG.

A huge night awaits in Paris where the Reds arrive knowing victory could seal a place in the last 16 of Europe’s elite competition—should Napoli also beat Red Star.

Klopp will have all his main men available, ensuring his side have the best possible chance of securing what would be a priceless win.

An interesting selection poser faces the German, who will decide between naming an attack-minded side to chase victory or playing it safe.

We take a look at how Liverpool could line up at the Parc des Princes. 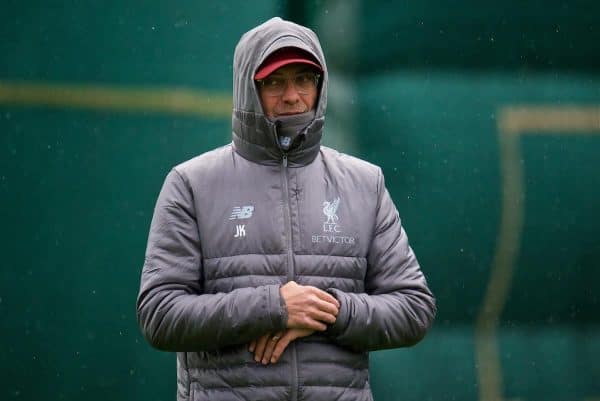 Klopp has named a 21-man squad for the trip to Paris having received two welcome injury boosts.

Sadio Mane was a doubt due to illness but has been passed fit after taking part in training and has travelled to Paris.

The Senegalese should keep his starting XI place providing all goes smoothly ahead of kickoff.

More good news is that Joe Gomez is also available after missing the Watford win as a precaution, and he could come into the starting team.

However, Klopp is denied a clean bill of health by Adam Lallana, who remains sidelined along with Alex Oxlade-Chamberlain and Rhian Brewster.

Klopp could make some adjustments to his starting lineup.

Midfield options are plentiful with James Milner, Fabinho and Naby Keita all hoping to be handed starts.

Jordan Henderson could keep his place considering he will miss Sunday’s Merseyside derby through suspension.

Klopp faces another key decision over whether to go 4-2-3-1 or 4-3-3 for a night in which defeat would prove disastrous for Liverpool.

Klopp’s decision to go with the attacking 4-2-3-1 setup at Watford, featuring all the big hitters, paid off with a controlled performance and convincing win.

With the Reds potentially one step away from the last 16, Klopp could deploy a similarly offensive side in attempt to secure a vital three points.

A couple of changes could be made in Paris, with rotation required throughout what is going to be a demanding run of games.

None of those should come in the attack—which picks itself assuming Mane will be fit to play—but switches could be made in defence and midfield.

Klopp could continue his rotation at centre-back by reintroducing Gomez alongside Virgil van Dijk in place of Dejan Lovren.

In the middle of the park, Fabinho—who will practically be fresh after playing only the closing stages at Watford—could reform his partnership with Gini Wijnaldum, at Henderson’s expense.

That would see two changes made and Liverpool start with this XI: 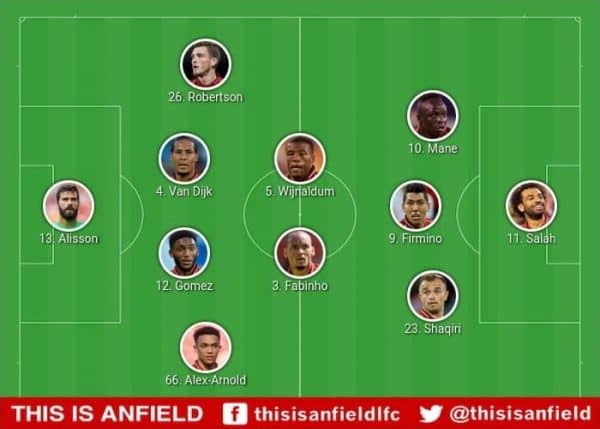 Fielding a highly offensive team against Watford is one thing, but doing so against heavyweights like PSG on a potentially decisive night is a different thing entirely.

Such a bold lineup could open up a game the Reds don’t need to play, with a draw enough to ensure qualification stays in Liverpool’s hands ahead of the final showdown with Napoli.

With that in mind, Klopp could take a more cautious approach, returning to the tried-and-tested and more solid 4-3-3.

While the system has been used just once from the start in the last six games, that it was in the biggest fixture away at Arsenal would make it no surprise to see it for another tough away match.

The system switch would bring changes to personnel in all areas and inspire a more secure, hardworking selection.

In defence, Gomez could replace Trent Alexander-Arnold rather than Lovren to provide a more defensively focussed right-back.

Henderson could keep his midfield place given he won’t play against Everton, with the captain able to slot back to the No. 6 role.

Rotation could come into play, and with Fabinho needed to step in against the Toffees, the energetic pair of Keita and Milner could join Henderson in an industrious trio.

The attack would also be back to a familiar look with Mohamed Salah on the right, Mane the left and Roberto Firmino taking the central striking berth: 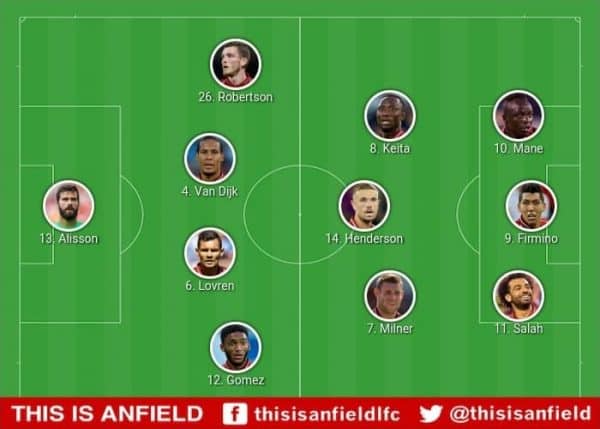 A nervy night awaits in Paris, but having already beaten PSG at Anfield the Reds can arrive with full belief that they can do it again to keep hopes of reaching the last 16 very much alive.