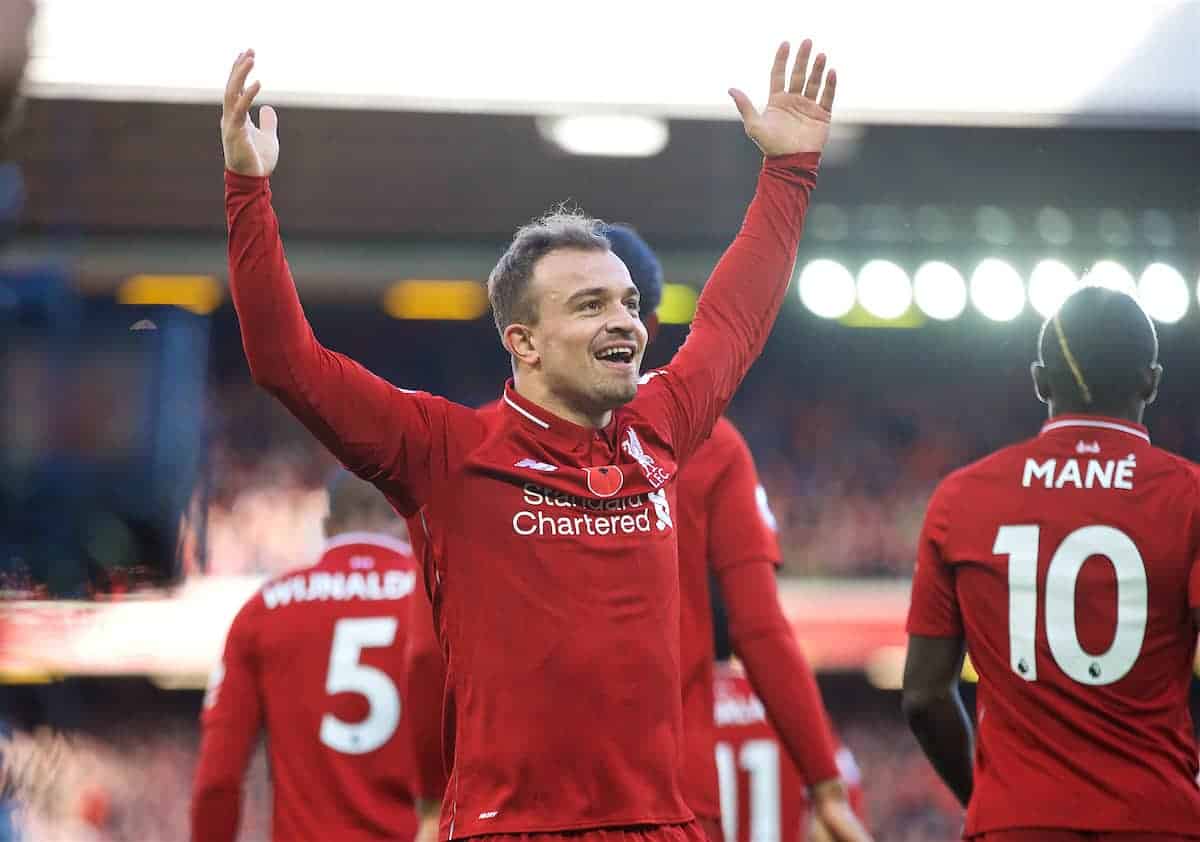 Liverpool eased to a comfortable but not always eye-catching 2-0 win over Fulham on Sunday, with Xherdan Shaqiri a pivotal figure.

Alisson came in for some slightly harsh criticism at Red Star and he wasn’t wholly convincing against Fulham.

He spilled one routine stop that was fortunately cleared by Virgil van Dijk—a save that a world-class goalkeeper has to be making.

Showed quick thinking for Mohamed Salah‘s opener, though, switching the ball out to Trent Alexander-Arnold, and was otherwise untroubled.

Struggling badly of late, the 20-year-old remained a long way short of his best at Anfield.

Touches were heavy and crosses were misplaced, although he played a lovely through-ball to Salah for his strike.

Young players will have dips in form, so no need to panic in the slightest.

Gomez came back into Liverpool defence and he was largely impressive, barring one slip-up in which he was nutmegged by Ryan Sessegnon and the youngster shot wide.

Yellow carded for pulling back Aleksandar Mitrovic, but the positives comfortably outweighed the negatives.

The Dutchman captained the Reds in the absence of Jordan Henderson and James Milner, once again excelling at the heart of the defence.

He brought so much authority to the team, improving and calming those around him, and the only negative was a headed clearance that rather sloppily went out for a corner.

Robertson has not been in full flight so far this season, and he was much better on Sunday, improving as the minutes passed.

He used the ball well down the left, linking up effectively with Sadio Mane on a number of occasions, and assisted Shaqiri with an inch-perfect cross.

One of four players brought into the starting lineup by Jurgen Klopp, Fabinho never imposed himself on the contest, as he continues to adjust.

A lovely lofted pass to Alexander-Arnold saw the right-back head over in the first half and he used his physical frame to good use, but he also looked a little on the slow side at times.

Not a performance that will live long in the memory.

After a couple of quiet performances, Wijnaldum was again frustratingly ineffective, albeit without doing anything wrong.

Replaced by Henderson on 69 minutes.

Shaqiri was left at home in midweek and he performed like a man desperate to prove a point, as Liverpool’s most creative player.

He was positive whenever he had the ball, threading passes into dangerous areas, and one well-hit strike flew narrowly wide early on.

The Swiss volleyed home in classy fashion to make it 2-0—the high point of another promising display.

Firmino returned to the side and took up a No. 10 role, but it is a position he is struggling in.

Like Mane, his touch was not always on the money, despite one beautiful move that Salah almost scored from, and he was often too deep to cause Fulham problems.

As selfless as ever, but not the Firmino of last season.

Mane has been off the boil too often in recent weeks and he was infuriating to watch at times on Sunday.

His touch was poor, invariably blunting the Reds’ attacks, and his finishing was erratic, with two good opportunities missing the target.

The Senegalese did look a threat, but we need more from him.

Salah led the line in a 4-2-3-1 formation, and while he wasn’t involved consistently, his influence ultimately proved priceless.

Having twice been denied by Rico, the Egyptian King gave the Reds the lead in clinical fashion—his eighth goal of the season.

His pace and movement were a threat throughout and he looked hungrier than at other times this season.

Used the ball crisply but the game was effectively over when he came on.

No time to make a proper impact.

Klopp made four changes, in what looked a spot-on team at Anfield, and he got a solid performance from his players.

They are still lacking a spark compared to last season, which may be down to the German’s new-found pragmatic approach to games.

All in all, a decent day at the office, as the Reds return to the top of the league, possibly briefly.