Liverpool have made three changes for the home game against Newcastle as Jurgen Klopp looks to rotate and keep his squad fresh during a key run of games.

The Reds are on a run of seven consecutive Premier League wins and sit top of the table heading into the Boxing Day fixtures.

Having beaten Man United and Wolves before Christmas, coupled with Man City‘s shock defeat at home to Crystal Palace, Liverpool have a four-point lead to protect.

Big games coming up against Arsenal and Man City either side of the new year mean Klopp needs to shuffle his pack at some point—and he has done so in midfield today.

Alisson starts in goal as always, but there are changes ahead of him in.

Alexander-Arnold returns on the right after injury, while Andy Robertson plays left-back. Virgil van Dijk and Dejan Lovren are in the centre.

Manager Klopp will be hoping to land his 100th victory as Liverpool manager today, which would ensure the Reds will be top when they head to Man City regardless of the result against Arsenal.

The boss has also confirmed that James Milner and Alberto Moreno miss out due to minor injuries.

“Millie has a little muscle problem so we couldn’t fix it quick enough, obviously, similar to Alberto Moreno [who has] some back problems,” he said ahead of kick-off. 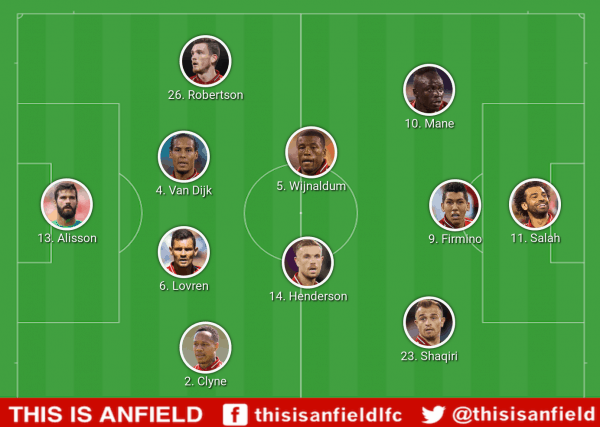