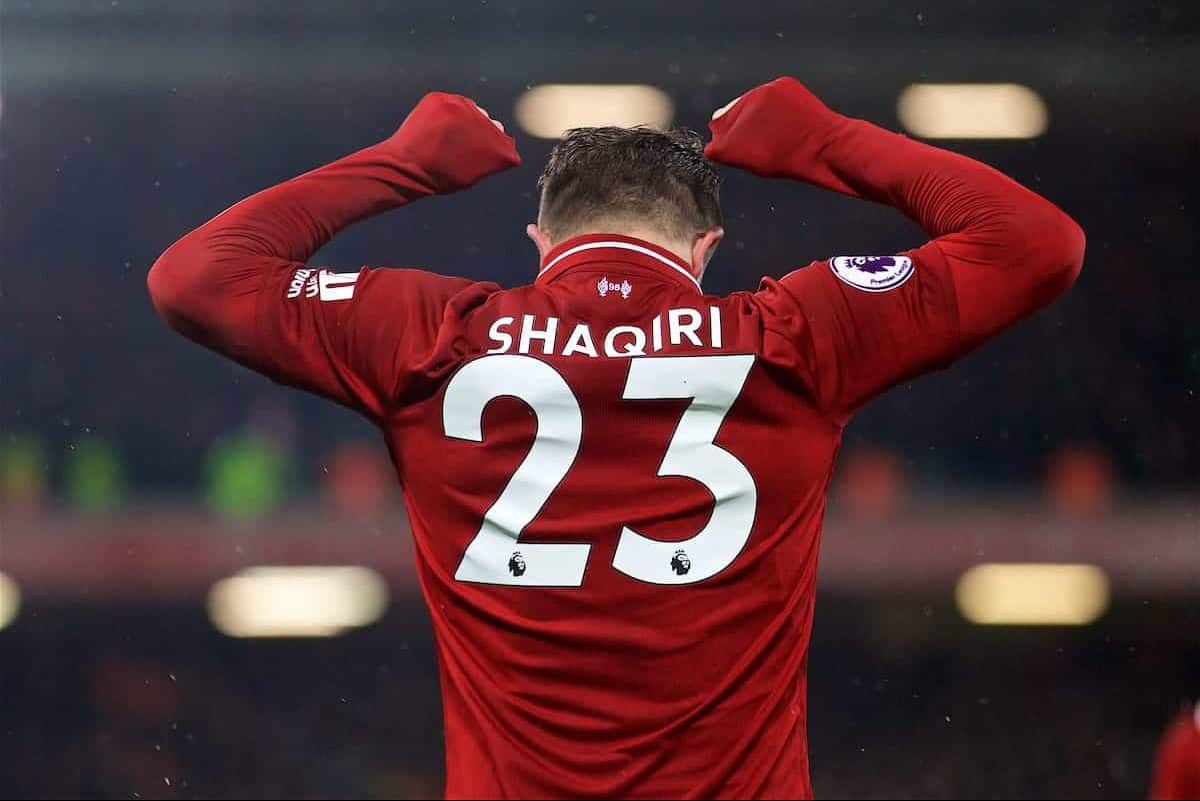 Liverpool picked up a richly deserved 3-1 win over Man United at Anfield, with numerous post-match statistic catching the eye.

Jurgen Klopp‘s side were on another level to their great rivals on Sunday afternoon, as they went back to the top of the Premier League.

Xherdan Shaqiri etched his name into Liverpool vs. Man United folklore with a crucial late double, after Sadio Mane and Jesse Lingard has earlier exchanged goals.

The Reds are flying at the minute, with victory at Wolves on Friday night ensuring they are top of the league at Christmas.

Here are five of the best statistics from the thrilling United victory, following another great day at the office for Liverpool.

Squad Depth Coming To The Fore

The main thing holding Liverpool back down the years has been a lack of options from the substitutes’ bench, particularly in comparison to their title rivals.

They now have squad depth in abundance, however, and it is proving to be an increasingly key reason for the Reds topping the pile.

Shaqiri’s two goals on Sunday means Liverpool have scored seven times from the bench in the Premier League this season, compared to just three in 2017/18.

It is impossible to win a league title with only 11 to 15 top players – Klopp has realised that and solved the issue emphatically.

Liverpool embarrassed United at times at Anfield, registering a total of 36 attempts on goal, compared to their opponents’ six.

One of the most intriguing statistics of the afternoon was that every single outfield player had a shot on goal for the Reds, including substitutes Shaqiri and Jordan Henderson.

Roberto Firmino had nine on his own and even Nathaniel Clyne and Dejan Lovren tried their luck from distance, albeit very unsuccessfully.

This has surely never happened in a game between Liverpool and United.

Firmino has not consistently been at his best this season, with the 27-year-old struggling to switch from a No.9 to a deeper No.10 role.

He was superb against United, however, impressing in all facets of his play.

The aforementioned nine shots were indicative of Liverpool’s dominance – he has not had more in a game since August 2014 – but it was the less noticeable aspects of his game that caught the eye.

Firmino had 101 touches, won four aerial duels, completed two take-ons and made two important clearances, one of which took the ball from under the nose of Marcus Rashford.

The Brazilian is priceless.

While Liverpool’s attacking play was often scintillating at Anfield, their defensive organisation was again something to admire as much as anything.

United only scored because Alisson gifted Lingard a goal and the visitors rarely looked like troubling an altered Reds defence.

Liverpool now haven’t conceded more than one goal in a Premier League game in their last 20 outings – the last time it happened was away to West Brom in April.

The manner in which the defence has been transformed since that harrowing 4-1 defeat at Tottenham last October is remarkable.

Such has been Man City‘s equally relentless form, it is easy to ignore just how special Liverpool have been in the league this season.

That’s now 14 wins and three draws in their 17 games, making it the fourth-best start at this point ever by an English side.

To sum up just how good the Reds have been, they are joint-level with their best-ever Premier League tally after TWENTY games!

Rafa Benitez’s class of 2008/09 racked up 45 points in that period back in 2008/09, meaning Liverpool could lose their next three matches and still be on a par.

What a time to be a Red.