Liverpool’s midfield selection once again presents the big dilemma for Jurgen Klopp ahead of Sunday’s showdown with arch-rivals Man United.

The Reds will need to rise to the big occasion for the second time this week as English football’s fiercest rivalry reignites at Anfield.

Liverpool, frustratingly, come into the grudge match having been hit by a wave of injuries, with something of a defensive crisis now on Klopp’s hands for a crucial period.

It means Klopp will be forced into changing the team—especially in defence—while further rotation could be conducted higher up the pitch.

So how could Liverpool’s starting XI look against United?

Injuries are piling up at the worst time, with defenders in particularly short supply for Sunday’s clash and the upcoming festive period.

Trent Alexander-Arnold is the latest to suffer a set-back, with a foot injury expected to keep him out for a couple of weeks.

Joel Matip is out for the next six weeks having undergone surgery after breaking his collarbone in Tuesday’s win over Napoli.

These absences add to Joe Gomez’s, who has a fractured leg, and leave Klopp with just two senior centre-backs.

Thankfully, there’s better news with some of those who could deputise in the upcoming games.

James Milner is available having only suffered cramp against Napoli, while Klopp confirmed Nathaniel Clyne is “ready” but perhaps not set to start.

Dejan Lovren is also officially back in the fold having featured as a late sub in the vital Champions League win.

Klopp will be forced into defensive switches but has strong options to rotate and freshen matters in midfield and attack.

Fabinho—who could also fill in at right-back—and Naby Keita could return after featuring as substitutes in midweek.

Xherdan Shaqiri will also be itching for a starting XI comeback having gone totally unused against Napoli.

The Swiss international’s involvement once again seems set to hinge on whether Klopp deploys a 4-2-3-1 or 4-3-3 formation.

It’s hugely frustrating that injuries will deny the chance to field a full-strength side that would surely have been too much for a poor United team.

However, this does make Klopp’s job in building his lineup for Sunday’s showdown slightly more straightforward, at least in regards to the defence.

Indeed, the back four picks itself with Lovren partnering Virgil van Dijk, while Milner seems nailed-on to be given the nod ahead of Clyne to deputise at right-back, as he did at Bournemouth.

While the defensive reshuffle is simple, there are key decisions for Klopp in midfield and attack—with these predominantly hinging on which formation is deployed. 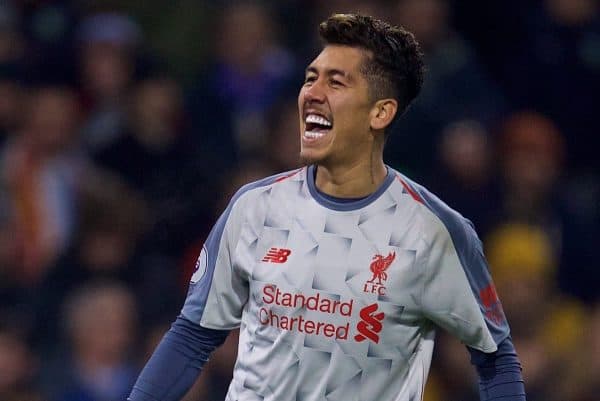 The former system got the Reds over the line against Napoli and, with Klopp having preferred a more secure set-up in big games this season, we could see it retained at Anfield.

It would mean the original ‘Fab Three’ occupy their traditional roles: Firmino as the central striker, with Salah in his most dangerous right-side position.

The big call comes in the engine room, and after an intense European night rotation seems likely.

Fabinho and Keita could both enter to complete a slick midfield with Gini Wijnaldum, with Jordan Henderson making way and Shaqiri held in reserve as a game-changing option. 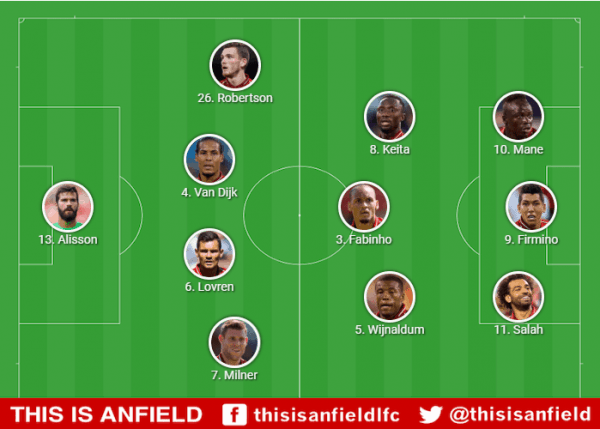 With an under-strength back-line to be in operation, Klopp could deem attack as the best form of defence.

And the German could reflect this by switching to 4-2-3-1 and utilising all of his main attackers from the off at Anfield.

Shaqiri would slot back onto the right side of the three-man attacking midfield unit, with Firmino switching to the No.10 role and Salah moving back to the central striker position.

Fabinho and Wijnaldum would likely form the midfield pivot to protect the defence and provide a stable platform behind the exciting quartet. 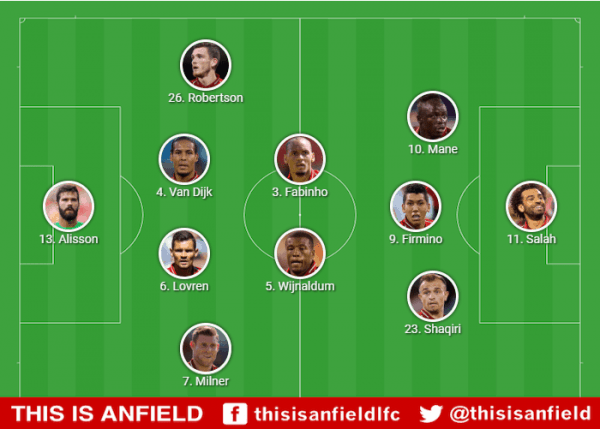 Though an under-strength defence provides concern, the midfield and attack inspires every reason to believe that a first Premier League win over United in Klopp’s tenure will finally arrive.