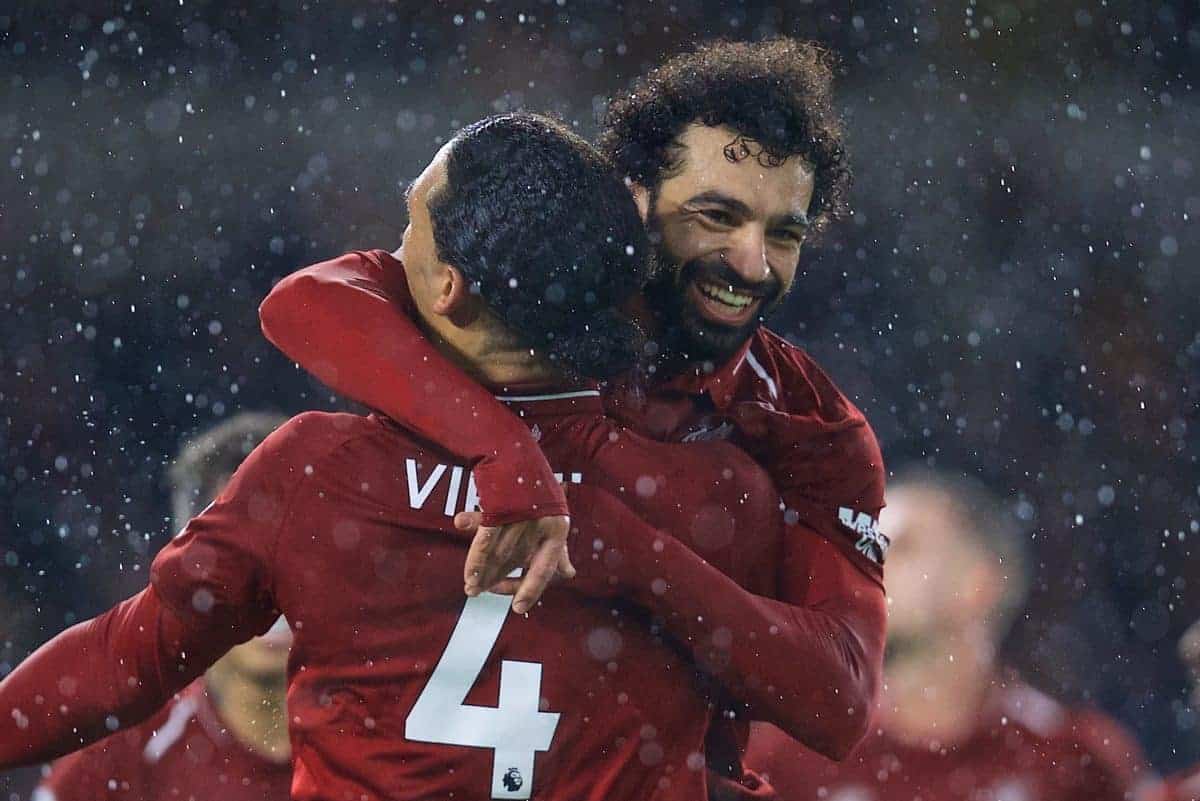 Liverpool sealed yet another win on Friday night, confirming their place as the Premier League‘s top side at Christmas with a 2-0 victory at Wolves.

Mohamed Salah has apparently been below-par this season!

The 26-year-old may not always have hit the truly world-class level so often on show in 2017/18, but his impact has remained huge.

Salah was majestic at Molineux, performing better than any player on the pitch and showing exactly why he is regarded as one of the world’s best footballers.

His all-important finish to put Liverpool 1-0 up was Lionel Messi-esque, taking him to the top of the Premier League scoring charts in the process.

Salah then bagged an assist for Virgil van Dijk, clipping a beautiful cross into a dangerous area for the centre-back to fire home.

The Egyptian’s pace, movement and tenacity were a joy to watch all evening, and without his influence the scoreline could have been very different.

Back to his absolute best—eight of his 11 league strikes have either been openers or only goals.

Jordan Henderson returned to Jurgen Klopp‘s starting lineup on Friday, but after Gini Wijnaldum had shone so brightly next to Fabinho against Man United, there were some groans from Liverpool supporters.

They needn’t have worried, however, as the captain put in one of his most accomplished displays of the campaign, combining quality on the ball with physical dominance.

The most interesting aspect of Henderson’s performance was the way in which he was given more freedom, with Fabinho often tasked with undertaking more defensive duties.

That’s not to say he didn’t sit deep for large periods, but his role was more box-to-box in style and Klopp’s decision to use him that way in a 4-3-2-1 formation paid off.

Henderson’s energy saw him biting into tackles and covering ground, while his passing ability was more risky and effective than as a No. 6.

This was more like the player who excelled in 2013/14, albeit with less attacking license, and he showed what a valuable squad member he remains.

He and Fabinho can be a good foil for one another moving forward.

Naby Keita‘s Liverpool career is still waiting to take off, but there have been signs of his brilliance shining through in recent weeks.

Once again used on the left-hand side, the Guinean endured a night to forget, however, never managing to get up to speed.

Booed by the Wolves supporters for falling to the ground a number of times, their vociferous treatment of him seemed to affect his game, with a sloppy pass almost proving costly.

Keita eventually left the early field in the second half, having picked up what looked like a stomach injury—strapping in that area is a potential excuse for his poor first half.

It is another setback for the 23-year-old, who will be so desperate to kick on and show Liverpool fans why he arrived as one of Europe’s best midfielders.

There should be no reason to panic, with so many eventual success stories taking time to settle, but Keita was a rare negative on the night.

Friday’s game was the first of four in 14 days for the Reds, as their squad depth and title credentials are set to be tested to the hilt.

Much has been made of the squad Klopp has built this season and retaining a freshness within the group, without dropping points, is one of the manager’s toughest tasks.

It was a resoundingly positive night in that respect at Molineux, with the players not exerting huge amounts of energy and key men not playing the whole 90 minutes.

Liverpool have more outfielders to clock over 2,000 minutes for club and country than any other side in the Premier League this season, with five, highlighting the importance of Klopp’s key men.

But on Friday one of those was rested from the start (Wijnaldum) and two (Roberto Firmino and Sadio Mane) were brought off, albeit the latter with mere minutes left.

Xherdan Shaqiri didn’t feature at all, keeping him fresh for a likely start against Newcastle on Boxing Day, with the likes of Daniel Sturridge and Divock Origi also kept in reserve.

On the other hand, there were also 32 important minutes for Adam Lallana, who is desperately in need of match fitness.

In years gone by, there would have been serious worries surrounding burnout at this point in the season, but Klopp has eradicated that issue emphatically.

Liverpool are top of the table at Christmas—imagine being told that back in August. It sounds great, doesn’t it?

Not only that but Klopp’s men are unbeaten after 18 Premier League games, winning 15 of them and not dropping a single point to a non-‘big six’ team.

It is a truly remarkable achievement and only the similarly freakish form of Man City is preventing the Reds from earning even more praise.

It doesn’t seem remotely fair that Liverpool aren’t sailing off into the sunset preparing for title celebrations already—in previous seasons that would have been the case.

Liverpool have 48 points after 18 games.

In two of the last six seasons, they hit 48 points in game 31. I prefer this season.

Firday’s victory opened up a four-point gap over City for the time being, even though it will likely be one again by Saturday night, and the professional nature of the win was something that has become the norm in 2018/19.

Make no bones about it, this is the best Liverpool team since the 1980s and they are in with a wonderful chance of ending that long wait for a league title.

They are top on merit and Pep Guardiola will know his side have a serious fight on their hands between now and May.