Liverpool striker Dominic Solanke saw a loan move to Crystal Palace fall through this week and now instead looks set to be sold on a permanent deal.

The forward has barely been involved this term for Jurgen Klopp‘s senior side, only making the bench once in the League Cup, despite playing 27 times last term.

A switch for the second half of the season to Palace collapsed due to doubts over his immediate fitness, but an exit remains probable.

Solanke scored his only goal of last season against the Seasiders, whose technical director is suggested as the driving force behind the interest; Dan Ashworth worked with the FA previously and will have seen Solanke’s impressive rise with the youth teams. 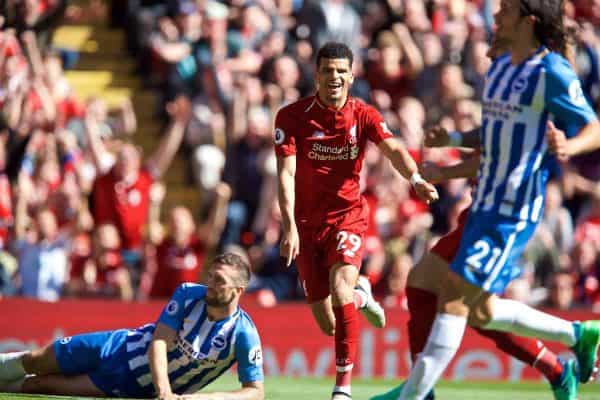 Jones suggests that Solanke will be fit and back in training within two weeks and would be valued by the Reds “in excess of £12 million,” leaving Huddersfield and Fulham potentially out of the running.

The move is still under consideration at present, but “is likely to develop significantly” this weekend.

Liverpool face Brighton in the Premier League on January 12, though it is unlikely Solanke would feature even if he has moved by then.

With Nathaniel Clyne set for a loan exit and Rafa Camacho the subject of overseas interest, Jurgen Klopp is so far setting about trimming his title-chasing squad rather than adding to it in the January market.