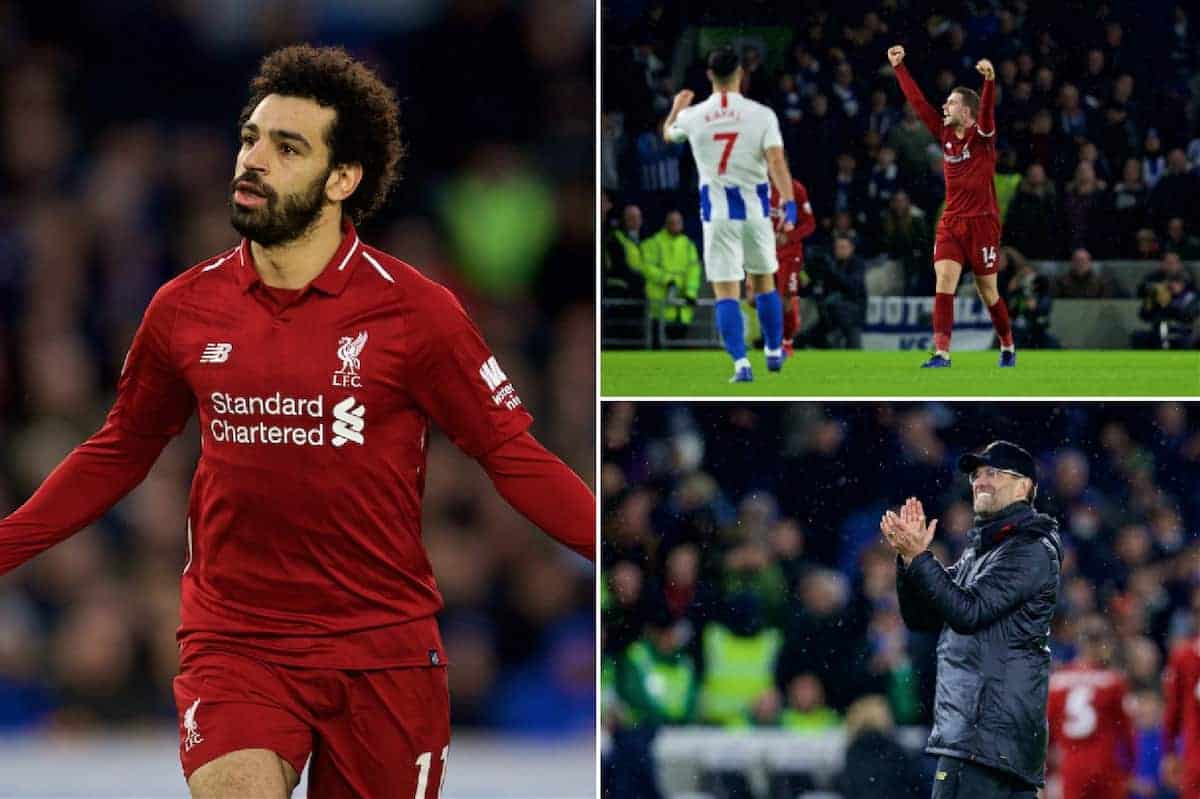 Liverpool bounced back from defeats away to Man City and Wolves with a narrow victory on the south coast against Brighton.

With the Reds suffering their first Premier League defeat just nine days ago against Man City, all the talk pre-match was about how the Reds would respond.

An eight point lead had dropped to just four before kick off. Anything but a win would have put the Reds under immense pressure. However, with the lions share of the game a Liverpool victory looked inevitable from early on.

Liverpool have been hit by injuries woes in defence over the last three weeks, which meant Fabinho took up a centre back role next to Virgil Van Dijk.

An early injury scare to Trent Alexander-Arnold thankfully didn’t add to the problems, the right back overstretched for a ball during the warm-up and had to go for treatment before the game started.

It was a dull first half overall as Brighton pulled all XI men behind the ball and asked Liverpool to break down two banks of five and four.

The Reds’ first sight of game came on nine minutes, Andy Robertson fired in a wonderful low ball that just escaped the boot of a fully stretched Roberto Firmino.

Xherdan Shaqiri provided the first half spark, drifting in from the right-hand side he looked to link-up with both Firmino and Mohamed Salah and it was the Swiss international who went the closest to breaking the deadlock in the first half.

Klopp was after more from his side and Liverpool came out for the second half looking for a quick goal, the Reds soon found one.

Salah looked to be out of space before he cut back and took on Pascal Gross, the Brighton player who was linked with a move to Liverpool in December, panicked and hacked down the Egyptian inside the box.

Liverpool’s top scorer picked himself up and smashed the ball home for his 14th league goal of the season.

The goal forced Brighton to open up more as the Seagulls had to look for an equaliser and that played into the Reds’ hands.

A series of chances came the way of the visitors, but neither Sadio Mane, Salah or Georginio Wijnaldum could find an all-important second goal.

It was the Dutch midfielder who almost added to the score, his shot from the edge of the box clipped the outside of the Brighton post.

The hosts then had opportunities of their own, almost grabbing an equaliser in added time.

Florin Andone found himself in behind the Reds’ back line, but Alexander-Arnold brilliantly got there first to clear the ball away from Jurgen Locadia who was primed for a simple tap in.

Liverpool hung on to claim a much-needed victory after back to back defeats in the Premier League and FA Cup.

A return to Anfield awaits as both Crystal Palace and Bournemouth provide Klopp’s men with the opportunity to consolidate their position at the top of the table.