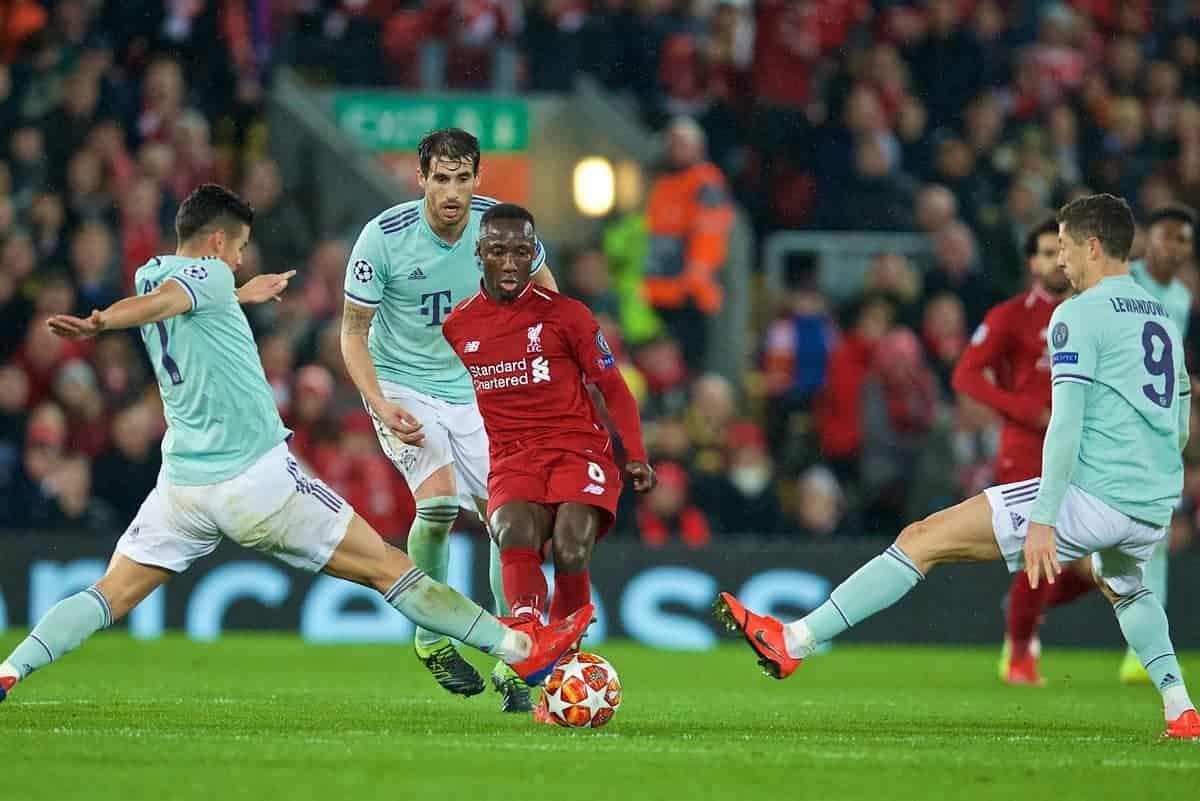 Liverpool and Bayern Munich played out an intriguing 0-0 draw in the Champions League on Tuesday, with fans providing mixed thoughts after the final whistle.

The Reds hosted the Bundesliga giants at Anfield in what proved to be a more cagey, tactical affair than some predicted.

Great chances were few and far between for both sides, although Alisson prevented a Joel Matip own goal in the first half and Sadio Mane missed a gilt-edged opportunity.

It leaves the tie very finely poised ahead of the return leg in Munich next month, with Liverpool’s clean sheet without Virgil van Dijk the major positive.

Keita and Henderson impressed, especially in the first half…

Frustrating result given the chances, particularly Mane’s skewed shot, but 0-0 is not a bad result at all. Fabinho and Matip deserve credit for keeping Lewandowski incredibly quiet while Henderson and Keita were very bright, particularly first-half.

Man Utd on Sunday, next.

“The best game Henderson has played since his arrival”

Having Keita is great. He can take the ball in tight spaces in central areas and drive forward. Shame his good performance coincided with Mané and Salah being off cue. It’ll be bedlam when they all play well at once

Naby Keita has finally arrived, could be massive for the run in

What a footballer Fabinho is, though. Colossal in a rare centre-back role.

Fabinho knows how to put in a tackle. Any tackle. #LFC ##FCB

“Big shout out to Matip and Fabinho. They did well to shut down Lewandowski.”

How good was Fabinho? Is there anything he’s shit at? The lad is immense!

“Fabinho was pretty good playing out of position”

Fabinho deserves enormous credit stepping into what is still a relatively unfamiliar role on a stage like that. Several perfectly timed challenges in key situations. Such an adaptable and intelligent player.

wait so why was Origi brought on instead of Sturridge or Shaqiri?

Keita's been our best player, I wouldn't take him off.

Frustrating night, think such a high press in the first 60' (right up to 6-yard box!) left the tanks a bit empty near the end.

Not enough movement, no space to dribble, nobody really looked like scoring other than Mane.

Not sure why Keita was taken off, best line-breaker in 2H.

Shaqiri must not be 100% fit. Not a chance does Klopp leave him as an unused sub otherwise

Why didn’t klopp use his 3rd sub??

Many were positive about a 0-0 draw, especially without Van Dijk playing…

Rather us needing to score than sit on a lead away from home.

Not bad I guess, can't recall too many instances where Lewandowski has been completely shut off and Bayern wasting time throughout.

Have to do it the hard way in the 2nd leg, but our side is capable

I think 0-0 in a home leg can be a decent result because we're capable of scoring against any team away, but our CL away form has been so poor of late.

FT: #LFC 0 Bayern Munich 0: Frustration at Anfield. Klopp's side far from their fluent best. German champions nullified their threat. But, crucially, Reds kept a clean sheet and will have Van Dijk back for the trip to the Allianz

0-0 is a fine result. They get their great home advantage (and our poor CL away record this year!) and we get the away goal advantage. All to play for.

“Am I missing something here? Advantage Bayern Munich?”

#LFC not at their best tonight so the major positive to take is a clean sheet. Bayern did a decent job of limiting chances but will have to open up more at home, which could be crucial. A perfectly poised tie.

Decent result for Liverpool, especially given absences. Fair play to their defence, too. After a shaky start, Fabinho, in particular, was class.

“No away goal for BM, but no goal for us at home to take an advantage. All to play for in 3 weeks time. Should be a good game.”

My god I have seen some whiney comments on my timeline.

We played one of Europe's best teams into a shell by half-time.

We kept a clean sheet against Germany's most prolific striker with a makeshift back line.

We are every bit in this tie and fit for United.

Happy with that. Bayern are quality. Think we'll score over there, tho. Up the Reds #LFC

Sunday now a test as much about what we can do to an attacking team away from home as it is the trip to Old Trafford. Good practice for the Allianz.

“Not a bad result at all. Back firing for Sunday”