Jurgen Klopp has made two changes to his Liverpool lineup for the Premier League trip to Fulham on Sunday afternoon.

Having produced a huge midweek performance to navigate their way past Bayern Munich in the Champions League, it’s back to domestic action this weekend for the Reds.

An away game at Fulham provides an opportunity for Liverpool to return to the top of the Premier League, with Man City having been on FA Cup duty on Saturday.

The Reds have drawn their last three away games, so an improved performance in an attacking sense will be required to bring the three points home from London, even with the Cottagers struggling down in 19th.

To that end, Klopp has named an attack-minded lineup for the game at Craven Cottage.

Alisson keeps his place in goal, while the defence is also unchanged ahead of him.

That means Trent Alexander-Arnold starts right-back, Andy Robertson on the left and a central pairing of Virgil van Dijk and Joel Matip.

In midfield come Klopp’s two changes, with Fabinho coming back in to anchor the middle, with Jordan Henderson absent through injury.

Ahead of him, Gini Wijnaldum is paired with Adam Lallana, who returns to the lineup after impressing last time out in the league against Burnley.

The Reds’ big front three are all starting, with the in-form Sadio Mane on the left, Roberto Firmino in the centre and Mohamed Salah to the right.

Dejan Lovren is again named on the bench after returning to fitness, while James Milner is the other player to drop out of the starting XI.

For Fulham, a couple of changes see Calum Chambers revert from midfield to defence, while Andre Frank Zambo Aguissa comes into the side along with Jean Michel Seri in midfield. 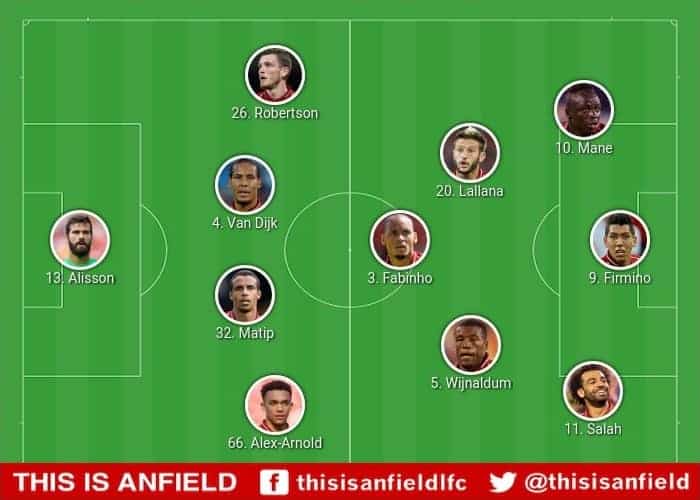