Liverpool have been handed positive news on Thursday with centre-back Dejan Lovren returning to full training with the first team.

The Reds have been getting by of late with just two fit central defenders—and sometimes only one, such as when Virgil van Dijk was suspended in Europe.

Joe Gomez‘s untimely injury, after establishing himself as first choice, diminished Jurgen Klopp‘s options right across the back line, but left the Reds particularly light in the middle.

Joel Matip had a brief absence of his own and Lovren has also been sidelined for the past two months, meaning the boss has had to get creative—in his own words—to cover gaps in the side from time to time.

Fabinho has been the go-to midfielder who has stepped in to play at centre-back, but 16-year-old Ki-Jana Hoever also made his debut, replacing Lovren in fact, in the FA Cup defeat to Wolves.

The Croatian has not played a single minute since then—appearing on the bench once before aggravating the injury—but the Echo report he returned to full training on Thursday alongside his team-mates.

In the absence of Lovren and Gomez, Matip and Van Dijk have re-forged an imperious partnership, helping Liverpool keep five clean sheets in succession recently.

Even so, it’s important that Klopp has other senior and natural replacements ready to step in, especially given the fitness record of Matip during his time at Anfield.

It’s extremely unlikely, of course, that Lovren would simply return to the lineup against Burnley on Sunday.

He hasn’t played for two months, while Matip has enjoyed his best run of form since joining the Reds. But a place on the bench would give a little more feeling of seniority and depth to the squad, while games ahead could see the need to rest or rotate. 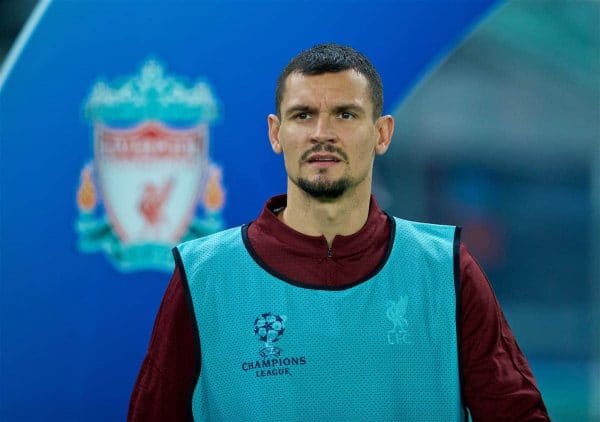 There is also, of course, the possibility that the Reds net a single goal over in the Allianz Arena and opt to see out the latter stages of the game with an extra centre-back in place, something Klopp opted to do earlier in the season, with Matip often a late sub.

Gomez, meanwhile, is expected to return after the upcoming international break.

For now it’s a positive to have one senior face back, even if Lovren has fallen down the order of merit this season due to others’ improved performances in his absence.