Jurgen Klopp has made four changes to his Liverpool side to take on Barcelona, looking for a crucial advantage from this Champions League semi-final opener.

The Reds are away for the first leg tonight, which means any goals could prove vital on the return to Anfield next week, as they bid to reach another final.

Both Liverpool and Barca warmed up in very positive fashion, the former thrashing Huddersfield and the latter beating Levante to secure the Liga title, and head into this tie full of confidence.

It could prove a tough task for Klopp’s side, and the manager has added physicality to his starting lineup at the Nou Camp.

Alisson keeps his place between the sticks, as ever, but will be hoping to fare much better against Barca this time out, having shipped four goals on his last visit with AS Roma.

In front of the Brazilian are Joe Gomez, Joel Matip, Virgil van Dijk and Andy Robertson, with Gomez making his first start since December.

Barca’s Ivan Rakitic described Van Dijk as “one of the best central defenders in the world” in his pre-match press conference, and the Dutchman’s contribution will be key.

Klopp’s midfield is comprised of Fabinho, James Milner and Gini Wijnaldum, as Jordan Henderson takes his place on the bench.

And with Roberto Firmino not deemed fit to start, the Naby Keita joins Mohamed Salah and Sadio Mane in attack.

If Mane scores one more goal this season, it will be the first time two Liverpool players have netted 25 goals or more in consecutive campaigns, following Salah and Firmino’s output last term.

The Senegalese has, of course, found the back of the net in every stage of the Champions League since joining the Reds, and the hope is that run can continue in Catalonia. 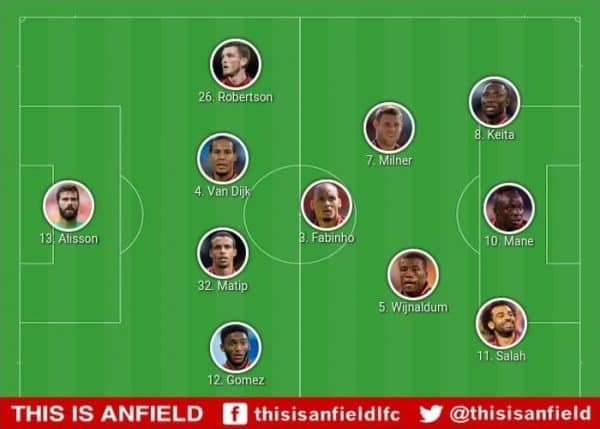