Liverpool defender Dejan Lovren insists being written off in their Champions League semi-final against Barcelona has made him “angry and hungry.”

Jurgen Klopp’s side face a difficult task in overturning a 3-0 deficit despite putting in a good performance in last week’s match at the Nou Camp.

The Reds have been given little chance in the second leg, despite all the evidence this season pointing to remarkable powers of recovery and resilience—with Saturday’s late 3-2 win over Newcastle to keep their title hopes alive the latest case in point.

“It makes me more angry. Angry and hungry to show them we are capable of doing something special at Anfield,” the Croatia centre-back told Press Association Sport.

“We have big players and big players should show in big games and I think this is one of those games on Tuesday so I expect one of the biggest games at Anfield.

“It doesn’t look like it from the result at the moment, because they are 3-0 up, but football is unpredictable – especially in the Champions League at Anfield.”

Lovren played a key part in one of the greatest recent European comebacks, the Europa League quarter-final at home to Klopp’s former club Borussia Dortmund in 2016.

Having drawn 1-1 in Germany, Liverpool found themselves 4-2 down on aggregate with 25 minutes remaining and seemingly heading out of the competition.

However, Philippe Coutinho and Mamadou Sakho put them in with a chance, although they were still losing on away goals, and Lovren scored with a header in front of the Kop a minute into added time.

The defender stressed it is difficult to make comparisons with that scenario as in April 2016 they returned to Anfield with the tie level and with an away goal to their credit but he believes that—and their never-say-die attitude this season—will give them inspiration.

“Look, I don’t think you can compare these games. It’s a different result from the first games,” he added.

“If I could compare I’d compare it to maybe the Man City game when we won 3-0 [in last year’s Champions League quarter-final] and they wanted to score quite early [in the second leg] and they scored.

“The most important thing is to score quite early and if we can manage that then everything is possible.

“Of course, we will never just accept that we already lost. It is just one game.

“It will be quite a tough challenge after 3-0 but I remember we did it many times and Liverpool are quite famous for big comebacks,” he added.

“I hope we can do it again but we need big support from the fans. This is, I think, the main thing.

“We need to be patient to be honest, not to rush. It is important if we could score in the first 10 minutes and there will be quite a lot of pressure on them but everything is possible at Anfield.” 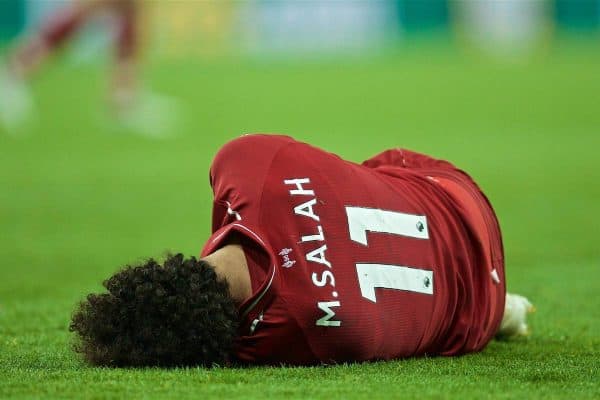 They may, however, have to achieve the unlikely without two of their feared front line.

Roberto Firmino has already been ruled out with a muscle problem and Mohamed Salah is doubtful after a head injury at Newcastle—potentially taking 46 goals out of the side.

“I hope Mo will be OK now after the knock because it doesn’t look good,” said Lovren.

“We showed already many times we can play without Mo and also a couple of other players. But the most important thing is the crowd.”